This weekend was the Palm Springs International Film Festival 2014, and while the reward could be great… you just never know what could happen at events like these… You just never know what will happen. I guess I had very high expectations and that’s never good. Sigh… But with a list that includes Sandra Bullock, Julia Roberts, Meryl Streep, Bradley Cooper, Bono, Amy Adams, etc… It’s hard not to.

A few of us headed down to the big gala and were hoping for the best clearly. I like Palm Springs, it’s a nice change of pace from being in Hollywood and it’s cool to visit another location. Oh course, we are all loaded down like pack mules because who knows who will show up.

After driving, dinner etc… We got our spot which last year was the prime location. And now… The wait begins… Billy Beer gets comfortable in his barcalounger, we’re joined by Lindsay from I am No A Stalker who I adore and I’m only slightly exhausted. Slightly is a slight exaggeration… The crowd when we got here… next to none… The crowd now… Seven people deep. There were some super fun people behind us and OTG John showed up as well. The Other Mike has his signature red hat on for the day… Man oh man, this could go really really good or really bad. You just never know.

The show was almost here and a blue car with red rims drove by. You see the oddest sights here in Palm Springs. Arrivals are starting, some stars like Monty Hall, and a few randoms have showed up.

The first nominee it’s Lupita Nyong’o! We yell and yell, and she is very nice and comes right on over. She signs my 12 Years a Slave UK Quad poster and also my SAG Screener DVD. Lupita Nyong’o goes down the line and is so kind. 12 Years a Slave director Steve McQueen has arrived and waves and goes onto the carpet.

Next arrival is Mandela star Idris Elba. He’s such a nice guy, he pretty much goes down the entire, he signed my Pacific Rim mini poster. So far so good… There is this annoying pseudo-reporter walking in front of the autograph line who is probably the stupidest person I have ever seen alive. She is trying to interview people as they sign autographs and then talk to fans as they are trying to get something autographed. Like… Get out of the way you moron.

Desperate Housewives star Alfre Woodard is here now. She comes over to us as we were the ones who spotted her and then says, “I’ll be back” and signs down the other end of the line… Wha?

Eventually she gets back to us and says, “I’m only signing four.” We were like… Okay… Thanks? LOL… It was nice of her to sign though and she covered a lot of the line.

Gary Oldman has just arrived and as nice as can be comes on over. 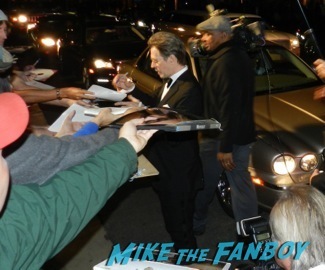 I don’t have anything for him but he’s as nice as he usually is. Such a cool guy.

Chiwetel Ejiofor has just arrived and signs farther down the line, but he makes his way down to us and signs my Love Actually poster, he smiled and was like, “HA!” and then also my 12 Years a Slave quad poster as well. Lindsay got a great photo with him as well! So far the Palm Springs International Film Festival 2014 is going well! And then… Matthew McConaughey arrives. He comes right on over and starts four people down from us. He is heading our way and then… The stupid reporter lady stands in his way and blocks him. I want to throw something at her! So because of her, we don’t get Matthew McConaughey at all… Sigh…

Then Jeremy Renner! Lindsay is dying for him and he goes all the way to the end and that stupid blonde reporter chick blocking him from coming over sigh…

Amy Adams has arrived and she gives us a wave. literally, just waved and went on the carpet…

There’s Bradley Cooper… He comes over and starts on the other end of the line and starts this way… But the report bitch tells him to head down past us… SO HE DOES! Son of a bitch! Sigh… Oh, there’s Ewan McGregor. So nice. He comes right on over and signs my vintage Details magazine. He quickly signs and goes down the line. Oh crap, there’s Julia Roberts. She comes over, and says, “I’m going to start down here.” and goes all the way down to the end of the line signs a little and then walks and waves… Ugh… Really?

Sandra Bullock has arrived and she is once again very kind. She comes right over and thanks to Lindsay she signs my Hope Floats mini poster and then I got her to finish my Practical Magic UK Quad mini poster. Tom Hanks crosses but Colin Farrell is also signing and so he goes five people to my right… Sigh… (BTW, this still doesn’t mean I think he’s a good signer, but I’m very happy that he seems to be lightening up a little bit lately, let’s see how 2014 goes!)

But the heartbreaker… Meryl Streep. She arrives and signs one person down from Billy. Seriously? It’s like I have a target on my back. You can never predict right? Ugh… Heartbreaking…

Bono and The Edge from U2 arrive and also come over. Super nice. Bono covers a lot of the line and I got him on my U2 Elevation DVD cover. Scotty and Lindsay got pictures with him as well… Overall, it really wasn’t worth all the hours we put in, but you know… I’m happy I got Bono, Ewan Mcgregor and of course Sandra Bullock.

Ah well… Until next time kids…