One of the biggest surprises for me last season was The Real O’Neals. I’ve only just started watching the series but I have to tell you, it’s really fun and it’s exciting to live in a time when a series can really explore a teenage Catholic gay teen who is proudly out. It’s amazing to be honest when you simply compare television from 10 years ago to today, and I’m all for the change!

The Real O’Neals had a great panel at the Paley Center and Billy and I were able to head down to check it out! The cast clearly love each other, it was so evident from the panel! Talk of course turned to coming out and having a series with a gay lead.

“I’ve been so moved by the tweets I’ve seen directed at Noah and other members of the cast, how watching the show has given them the courage to come out to their parents. What an incredible thing, that it’s inspired people to do that.” Said Martha Plimpton.

“It’s been interesting, a lot of kids, some parents reaching to me. Getting advice on how to deal with coming out. It’s hard, I’m learning how to navigate.” added Noah Galvin. The series tries to really be true to the situation even having Eileen O’Neal have difficulty with the coming out process.

“It’s a wonderful thing to explore, story wise and playing with Noah, and writing wise. We know that, anyone who reacts badly at any given moment intends to do harm, they react out of fear, or being challenged, or being threatened but that reaction is never for that person, it’s not coming from a place that we on this panel would ever call hateful.” Mentioned Martha Plimpton,  “It’s incumbent on us to tell the story of that relationship regardless if they are coming out as gay, or trans or just rebelling. We all have these dynamics that play out in our families. It just so happens that this particular dynamic is one that can often result in families really breaking apart and suffering. So in order for us to reach those people and use comedy; the universal comfort of comedy, in order to do that, we have to come at Eileen and people who feel like she does in a matter of understanding and empathy. I’m comfortable having that position and task.” In the series the parents are divorcing and that’s playing out on screen which is really rare.

“We try and get into a lot of different issues on our show and the issue of divorce is something 50% of us all go through.” Exclaimed Jay R. Ferguson, “It’s an interesting topic to address especially in this unique situation where they are separated and still co-habitating. It was just one of those things that was never the right match and the characters realizing it together.”

“It’s also nice to have a Catholic family dedicated to their faith and also recognize that they make mistakes. The marriage proceeded these beautiful children. Divorce is part of life and giving them a way to forgive themselves.” Added Martha Plimpton. “I was a product of divorce, and when I was growing up and going through that, I had nothing to watch or example of seeing what that looks like. I’ve pushed since day one, my favorite thing is that the parents are getting divorced and it’s actually happening. For me, it’s another portion it’s another thing that helps kids going through that. I did live through it and now I see it in a different light.” Said Matt Shively.

After the panel the cast was super nice. Security was a bit overzealous but everyone stayed for as long as they could. I was able to get a couple posters signed as well as a picture with Noah and Martha Plimpton even though Billy took a horrible picture of me and Martha Plimpton but he did get my Goonies and Raising Hope FYC promo signed so I forgive him! 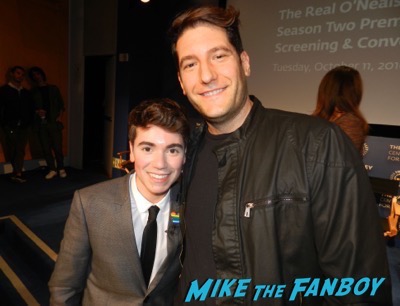 There was also a Price is Right display in the lobby that we clearly had to take full effect of. It was a really fun night and I’m hoping that The Real O’Neals stays on the air for a long time. If you haven’t seen the show, you really need to check it out!