Home / Columns • Featured • Lindsay / The Top 10 Ways To Have A Vanderpump Rules Experience! Lindsay Shares How She Met The Cast! Heading To Sur! And More!

First off, I must apologize to the wonderful Lindsay, who sent in her article weeks ago while I was gone on a business trip, and then I got swamped with work and now… I’m sick. BUT I was determined to get her column up before the end of the month! I sort of succeeded right!

Now… I have no idea what a Vanderpump is, I thought at first this was a recap of an early 2000 Nick cartoon series, but after reading it, I discovered that it’s a reality show. Now, while this isn’t my favorite genre, I love, absolutely love that everyone has their own fandom and loves. That’s what this hobby is about and I think it Rawks!

Lindsay has done a phenomenal job in detailing how you can have a Vanderpump Rules Experience of your very own and if you love the show you have to do this. Seriously!

Also, don’t forget to check out Lindsay’s website www.IAmNotAStalker.com for more tips like this and an in depth guide to filming locations. Lindsay is one of my favorite peeps in all the world!

Without further delay check out Lindsay’s top 10 ways to have a Vanderpump Experience below!

How to Have a Vanderpump Rules Experience

I am a massive Vanderpump Rules fan. (Five bucks says Mikey has no idea what show I am talking about right now.) The Bravo reality series, which ended its fourth season earlier this month, centers around West Hollywood’s Sur Restaurant & Lounge and the pretty people who work there. The hip eatery, located at 606 North Robertson Boulevard, is owned by The Real Housewives of Beverly Hills star Lisa Vanderpump and her husband Ken Todd, who both have their hands full manning the trials and tribulations of the oh-so-dramatic staff. As strange as it may seem, the stars of the show do actually work at Sur and if you eat there, you will see them. Heck, there’s a chance Scheana Shay or Katie Maloney might even be your server! Upon realizing that fact when I first started watching the series a couple of years ago, I became rather obsessed with dining there. Thinking the restaurant would be exorbitantly priced (it’s not), my husband and I decided to save the endeavor for a special occasion and descended upon Sur, along with some good friends, for my birthday dinner in June 2014. The experience was everything I hoped it would be – and more (aside from the sad fact that Stassi Schroeder, my favorite cast member, had recently quit, so I did not get to meet her that night).

I wrote a blog post detailing our evening at Sur shortly thereafter and as a result of that article, I regularly receive emails from fellow VP fans asking for tips on everything from booking reservations to the best times to visit to how to approach the stars. So I decided a follow-up post was in order and what better place to do it than on Mike the Fanboy? Without further ado, here is my best advice on how to have your own Vanderpump Rules experience.

1. Book Reservations Between May and December – I have dined at Sur a couple of times and it has been my experience that the stars only work on the premises during the months that the show is filming. Typically, shooting takes place from May/June through November/December each year. 2. Follow the Cast on Instagram, Twitter, et al. – The series stars almost always announce the exact dates when filming of each season begins and ends via social media. (Scheana is especially good about this.) Not only that, but the cast members will also often promote events they are attending on various platforms, so even if you don’t make it to Sur, you can potentially cross paths with them elsewhere. I finally got to meet Stassi a couple of weeks ago at an event that I found out about at the last minute thanks to a mention of it on her Snapchat. 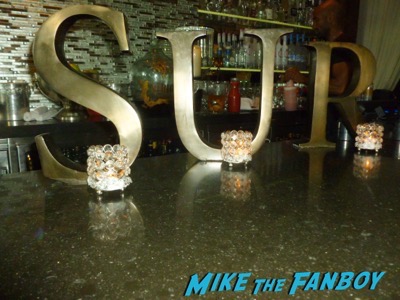 4. Ask the Hostess – My friend Lavonna made our reservation and, while doing so, asked what days and times would most likely garner us sightings of the cast. While the hostess obviously couldn’t guarantee the stars’ presence with any certainty, she was more than helpful in letting us know which times would most likely coincide with filming of the show and, therefore, the cast being on the premises. 5. Book a Friday or Saturday Night – Anyone in the restaurant business knows that Fridays and Saturdays are the busiest and best nights to work and that goes for the cast of Vanderpump Rules, as well. Most of the series stars will be onsite those evenings and that is also when the vast majority of filming at the restaurant takes place, so those nights are the most opportune times to visit the eatery. (We dined at Sur on a Saturday night.) 6. Book a Table at Around 6 p.m. – Our dinner reservations were for 6 p.m. We showed up around 5:30, when the restaurant was rather empty, which allowed us the chance to take photos of the place sans people. It also allowed us to get our lay of the land prior to it becoming super crowded, which it invariably did. (By 7:30, the bar area was wall-to-wall people.) Before dining, we grabbed cocktails in Sur’s beautiful lounge. It was nice to be able to relax for a bit and browse the restaurant before craziness ensued. On the night we were there, the cast did not start showing up until around 7 p.m. We took our time with our meal and did not leave Sur until about 8:30, so we were there for a good three hours – and every minute of it was a blast. 7. Talk to Anyone and Everyone – Arriving early, before the crowds, also allowed us time to talk to the staff. We chatted up absolutely everyone we could, all of whom were super helpful and nice. We wound up making friends with the head of security and, not only did he take us on a tour of the entire restaurant (including the back smoking area where all of the drama takes place!), but he acted as our wingman all night, alerting us whenever one of the stars arrived and helping us to get photos with them. The entire staff is ridiculously friendly, so don’t be afraid to talk to them and ask questions. 8. Don’t Be Shy – While the fare at Sur is easily some of the best I’ve ever tasted (the Crispy Chicken Breast is uh-ma-zing!), let’s face it, that’s not why most people are there. They’re there to meet the cast. So if you see a star, ask for a photo – or an autograph if that’s what floats your boat. At one point during our meal, the woman next to us leaned over to say she was so glad to be sitting near us because otherwise she wouldn’t know what she was doing. My best advice is just go up to the stars. They absolutely will sign autographs and pose for photos. They know that’s what they – and you – are there for! 9. Don’t Be Afraid to Explore and Take Pictures – As I said, the staff is extremely friendly and this is one L.A. restaurant where photos are not only allowed, but encouraged. You won’t be chastened for running around taking pictures of every square inch of the place (as my friends and I did) or for venturing out to the back smoking area to pose dramatically for an Instagram shot. 10. After Dinner, Head to PUMP – Lisa Vanderpump’s latest restaurant endeavor, PUMP, is located right around the corner from Sur, at 8948 Santa Monica Boulevard. The eatery is nothing short of spectacular, especially its spacious heated garden, and I can’t more highly recommend grabbing a drink there. Lisa also dines at PUMP most nights (look for the table with the pink chair underneath the chandelier in the very center of the garden) and you’re far more likely to catch a glimpse of her there than at Sur. You might even spot VP bad boy/resident DJ James Kennedy spinning tunes onsite.

Check out Lindsay’s Photos with the cast below! Don’t forget to check out more of Lindsay’s awesomeness on her site www.iamnotastalker.com!