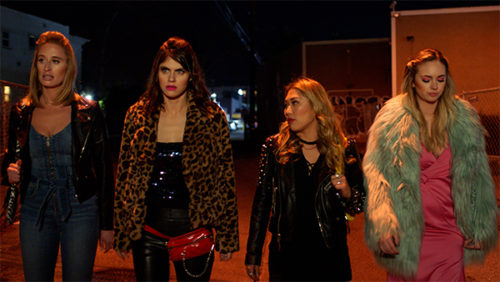 Road Trips should never be painful, but as The Rolling Stones’ once sang, “You can’t always get what you want.” Clearly, “1 Night in San Diego” didn’t get the directions and took a sharp detour going nowhere.

Road Trip movies can be comedic gold, but when recycling romantic comedy plotlines with nerd culture and reality TV commentary, you need to find the right voice. Sadly, “1 Night in San Diego” is worse than realizing Camino de la Plaza is the last exit before you hit Tijuana on the I-5. Point is if you don’t have a plan, you’re going to wind up in another atmosphere and regret some pretty questionable decisions. If you don’t have a solid navigator and an alert driver, it can be disastrous. Maybe writer/director/producer Penelope Lawson should’ve recused herself and focused more on each aspect instead of attempting this clumsy comedic effort. 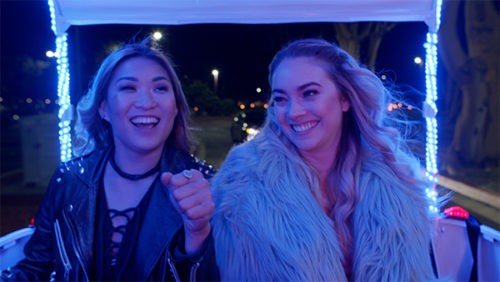 Jenna Ushkowitz portraying a reality TV starlet is certainly believable and the chemistry with Laura Ashely Samuels seemed solid enough, but after the first few minutes that quickly dissipates. The movie meanders around and feels too generic. It’s lacks the truly standout moments of similar movies like “Girl’s Trip,” “Bachelorette” and “Rough Night.” Now it’s not ridiculously raunchy or a beautiful “buddy movie” and wobbles around too much trying to find it’s identity. San Diego is an amazing area and there are so many cool comedic opportunities (especially in the Gaslamp District), but the film doesn’t embrace enough the wild possibilities. Instead, you literally have an interchangeable destination and setting, resulting in a forgettable film.

Like most viewers, you’re probably considering checking out the movie because of Alexandra Daddario (which I’m 100% guilty of myself), but it’s nothing more than a small supporting role. Alexandra Daddario is quickly becoming the Margo Martindale, Melissa Leo and Beth Grant of this generation, popping up in everything. Unfortunately, the poorly-executed plotline leaves little to be excited about and is another forgettable film to watch with wanting to pass the time. Imagine an episode of “Glee” (or any broad super generic sitcom comedy) with a road trip concept and the acting of Reality TV, you would get “1 Night In San Diego.” Before buckling up your seatbelts and taking a drive I strongly advise on a new destination before heading out.