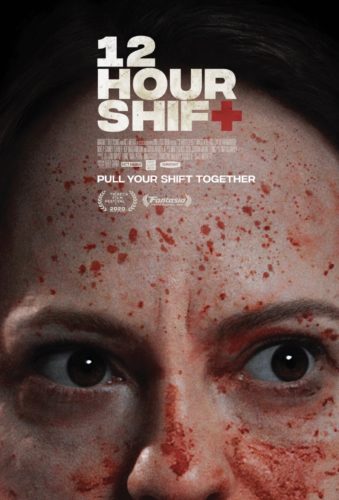 Gritty, genre-bending films like “12 Hour Shift” are absolutely the reason why you rush out to see films. Horror heroine Angela Bettis sensationally squeezes every opportunity in this fun film horror fans everywhere will adore.

Working the night shift can be grueling, but so can be trying to suppress your drug habit. Nurse Mandy (Angela Bettis) works at an Arkansas hospital and earns extra money to feed her junkie needs by harvesting organs for the black market. After her blonde bimbo cousin Regina (Chloe Farnworth) misplaces some “product” for Nicholas (Mick Foley), the two are left scrambling for a solution. Given it’s a chaotic night, anything can happen during the night shift at the hospital, especially when a killer gets on the loose. 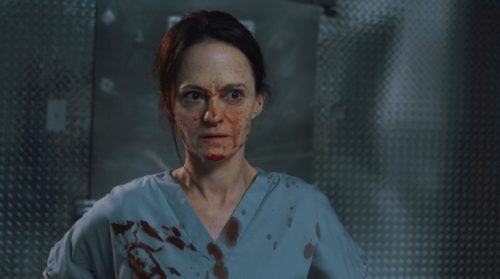 Angela Bettis provides her strongest performance since “May” and is an amazing anti-hero. Bettis beautifully conveys an amazing assortment of emotions with her soulful, stone-cold expressions exuding the right tone and creating the perfect setting for each scene. Although the tone of the film fluctuates from horror comedy to thriller and dark drama, Bettis rolls with the punches in a spectacular leading role. However, the true surprise is Chloe Farnworth who is somehow a cross of Heather Graham (think Roller Girl from “Boogie Nights”) meets Zoey Deutch (Madison from “Zombieland: Double Tap”) with a ditzy, dumb blonde, but with a literal killer attitude. Together these two create a funny, yet fearsome pairing as cousins selling harvested organs.

Written and Directed by Brea Grant, “12 Hour Shift” persists as a great genre-bending film that might be a black comedy at heart, but the film fantastically focuses on a goofy group of small-town characters pushed to their limits. The small town vibe and the idea of setting “12 Hour Shift” in the late 90s allows audiences to appreciate the natural horror elements of a heist gone wrong in a surprising setting. The fact you have an unlikable, almost antihero in Mandy makes the movie even more enjoyable with how everything unfolds. The simple subtly Bettis provides helps make the movie more wild and the whacky characters standout, especially when David Arquette’s serial character arrives on the scene. Having a film take place in the world of organ trafficking persists as an awesome basis for a story and Brea Grant executes the concept at the highest level.

Brea Grant’s smart, stylized and mean movie leaves a lasting impact. Although it’s only 90 minutes, “12 Hour Shift” will linger long after watching thanks to a strong screenplay and superb acting all around. Watching “12 Hour Shift” feels like that hidden movie you would stumble upon in the video store or watching late night cable. It’s an all-around edgy, female-focused flick well worth discovering about struggling in the workplace. “12 Hour Shift” is a blistering, bloody good time and a perfect film for this Halloween season.

Currently available in theaters and Video On Demand.