Home / Reviews / Checking Out Geostorm in 4DX! AKA My Mother Clings To Life While Experiencing Movies In A Whole New Way!

When it comes to new and exciting theatrical experiences, there are few that can compare to 4DX. It’s just an incredible way to experience cinema and if you haven’t had the chance to check it out yet, I highly recommend you do so.

First a little more about 4DX for the uninitiated:

“Movies are no longer confined to the screen. 4DX draws you into the movie as if you’re living inside its world. We provide the largest number of multisensory signature effects industry-wide. With 20 different kinds of signature effects, 4DX creates the most outstanding environment for movies.

Every second counts in the movie experience. What matters is how we transform those moments into reality. Delivering precise and elaborate seat motions with the movie scenes is our specialty. Not only do 4DX motion seats have a wide range of speed control, they also deliver precise vibrations to bring out realistic emotions and feelings.”

Now, I’ve checked out 4DX a couple times, so I thought for this new experience I would take my mother, so she could see how 4DX impacts a movie watching experience. Let me paraphrase this by saying, I’m pretty laid back and subdued. My mother on the other hand lets her emotions fly and is a tad more reactionary. 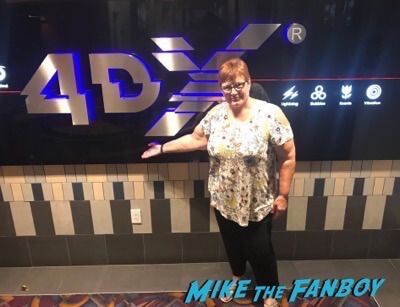 This was never more evident by the fact that she practically ripped my arm out of its socket… during the 4DX preview. Yep… The preview. The seats started to move, the water sprayed and my mother clinger onto my arm for dear life as I tried to pull away to no avail. Yep, I was being clung onto for dear life, which I see where at least in part I get my grip from. When push comes to shove, my Mom is going to make it or take us all down trying. LOL. 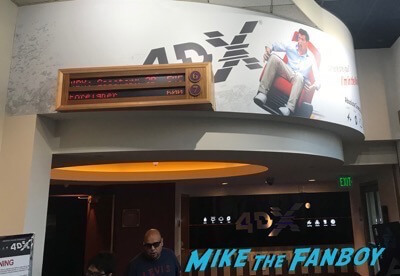 In all honestly, when talking to my mother she said, “I have to tell you, once I settled down, I really loved the fact that the seats moved with the action, it really felt like I was part of the movie and there with the actors. It’s something I’ve never seen before.”

I think that’s a really important thing to note when talking about 4DX because bringing and enveloping one into the action is one of the key aspects to what makes 4DX such a unique occurrence. It’s really hard to get sucked in to a film at times, especially when you have a film like Geostorm, which is the film that we saw in 4DX. Let’s just say, Geostorm isn’t going to get nominated for any awards. 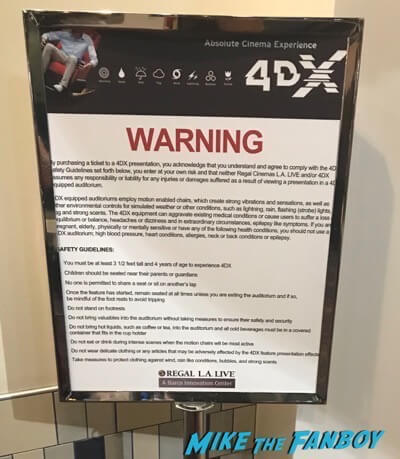 It was however, a great comedy and kind of the perfect film for the 4DX. It really gave us everything that 4DX had to offer, the wind and rain effects were awesome, plus the action was so enhanced by the seats, it was pretty epic.

I have to say, as I’ve said in the past, if you are one of the lucky ones who can experience 4DX in your area, I highly recommend checking it out.