You know it’s a good day when you meet both Colin Farrell and Rachel Weisz in the same night. Enough said. Honestly, I’ve never had the chance to meet Rachel, even though I’ve loved her in Constantine and Lovely Bones.

I’m so happy Elisa has able to meet her though, because I know what a big fan she is. It’s always nice when you know someone is a huge fan and they finally get to meet someone they love! It warms my fanboy heart!

Check out Elisa’s full recap from her night in the big apple after the jump!

As you may have figured out by now, I’m a pretty big Daniel Craig fan. Not just of his acting but he’s a pretty awesome guy all around. When he got married last year, I was thrilled for him. Even more so because he married the lovely and talented, Rachel Weisz who I’d been aware of since The Mummy but became a fan of in The Fountain (with Hugh Jackman). This year, I’ve tried MULTIPLE times for Ms. Weisz, mostly during promotion for  The Bourne Legacy, and gotten nothing, minus a nice wave from across the street at the premiere.

So, when my friend and MTF reader, Dan found out she’d be doing a Q&A for The Deep Blue Sea, I HAD to be there to try. I kept hearing how tricky it was to get her lately but I still held my breath that this would be the night! I was working until 8 that day and would probably make it to the theatre in time for her to arrive. It also happened to be the same night as the Lincoln NYC Premiere so we had hope no one would be there. We were right. I was the first to get there while Dan tried, unsuccessfully, to get Steven Spielberg to sign his original D/S Jurassic Park one sheet.

A couple of nice collectors I knew from a few other events showed up as well and we all settled in. While we waited for her, Dan and I noticed a familiar looking man arriving at the theatre. It was Tony Gilroy, director of The Bourne Legacy! We called out to him and he was incredibly surprised we knew who he was. We both asked for pictures and he was kind enough to stop and take them, sort of laughing at the fact that we recognized him. 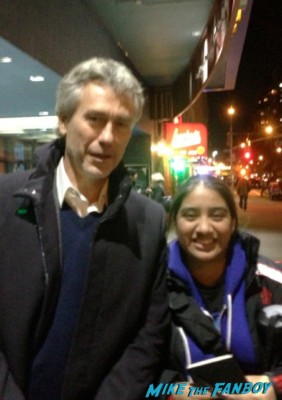 Almost immediately after that, Rachel Weisz arrived, looking gorgeous, as always. She ended up getting there pretty late, at least a half hour later than we thought she would be. A girl came out of nowhere and asked for a picture, taking FOREVER. She patiently waited  while Mr. Gilroy snapped the photo for them. Her security was rushing her inside because she was running late but she managed to sign for one of us, saying that she would get the rest on the way out! (I had brought my folded Bourne Legacy poster from Empire Magazine and realized I could’ve gotten Mr. Gilroy on it too. D’oh!) I REALLY wanted a picture more than the auto but I figured she would probably do one or the other, if she did any on the way out. Still, there were only four of us there so my hope wasn’t totally lost. 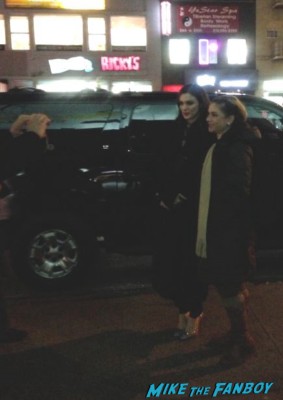 While we waited for the Q&A to end, we saw that a bunch of people were leaving the theatre with rolled up posters. At first we thought that it was The Deep Blue Sea letting out and that the Q&A was REALLY REALLY short. We finally asked and it had been a screening of ParaNorman with a Q&A with the director, Chris Butler held by one of the schools, I forget which one. We saw Mr. Butler leave and me and one of the other guys ran over, I got the ‘graph and he got a photo. I haven’t seen ParaNorman but I’ve only heard GREAT buzz and that it’ll be one of the Oscar nominated animated films. 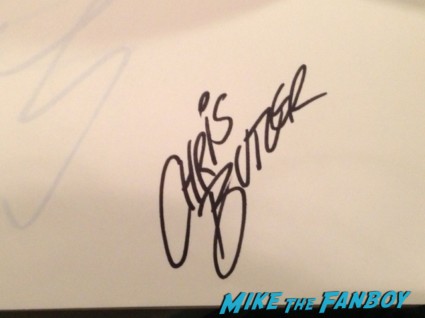 I notice Mr. Gilroy leaving and I quickly ask him to sign my poster and he graciously stops again. We see Rachel chatting in the lobby of the film and can tell they want to get her out of there quick. We line up and patiently wait, my hopes are high. I selfishly stand so I’m in the position to get her first. HAHA. She comes out and I ask if I can have a photo. She says YES! I’m thrilled and we snap a quick one, then Dan jumps in and gets one too. (I’m still camera-less at this point and Dan’s forgotten his at home, so we are using our iPhones, not the best but hey, you can tell it’s her!) 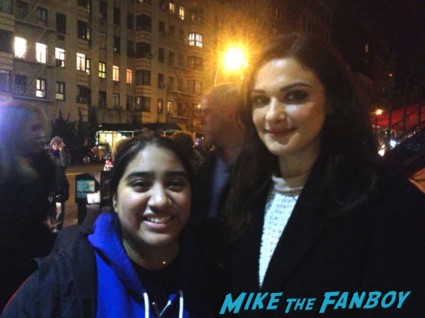 She snaps photos with the other two and I manage to slip my poster in and she signs it as she heads to her car. I’m in awe that it happened. Even now. SUCCESS! 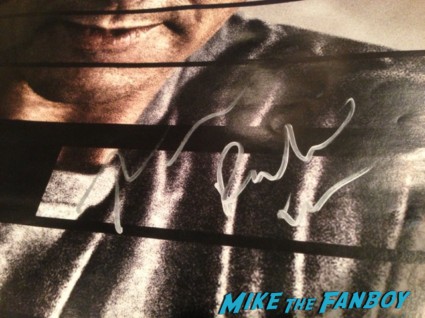 We decide to head over to the Ziegfeld to check out the Lincoln premiere exits. Dan had seen Colin Farrell among other come in so we figured we’d try. I’m still in shock and keep repeating how much I can’t believe I got a photo with her. Haha.
We get to the theatre and no one was there so we walked around for a bit, returning about ten mins before the screening ended.

We grab a spot among the pros and fans. It was pretty much a mass exodus of people. Colin Farrell, Peter Facinelli, Tony Danza, Blondie, Patrick Wilson, Meg Ryan ,Vanessa Hudgens, Kathy Najimy, Tony Bennett, Kellan Lutz, and a ton of others…

I managed to get pictures with

Colin Farrell (and an autograph) 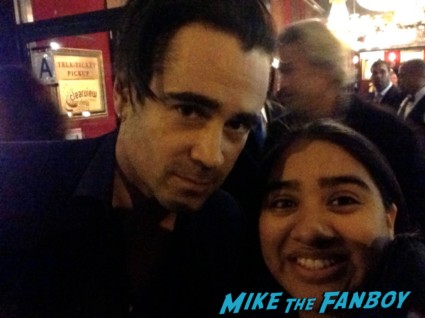 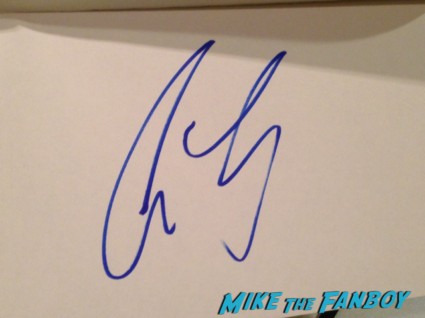 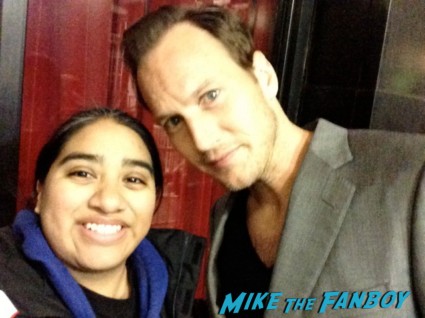 Zach Woods (Gabe from The Office) (and an autograph) 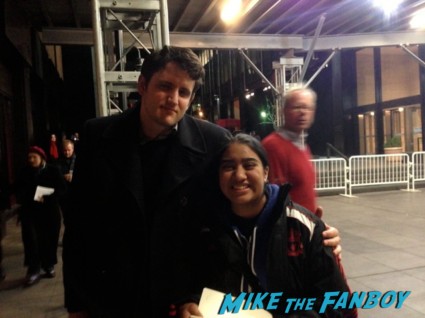 and Kellan Lutz who told me I had a really nice smile. I giggled. Loudly. And I NEVER do that. I loved him on Generation Kill though! (Sorry guys, I’m not a Twilight fan). 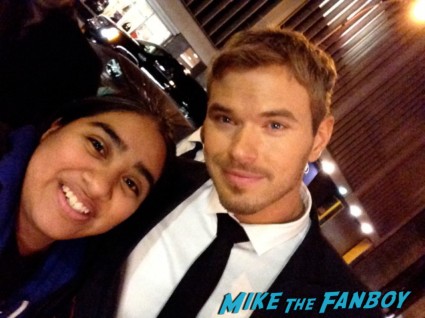 I got autographs from

Stephen Schwartz (composer/lyricist of Wicked, Godspell, Pocahontas, The Prince of Egypt, just to name a few) 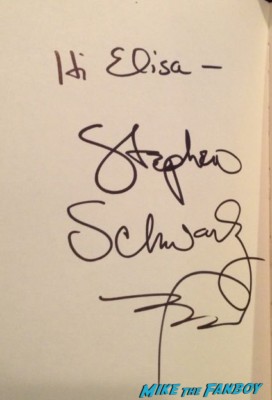 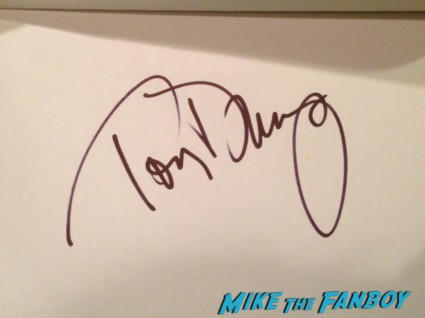 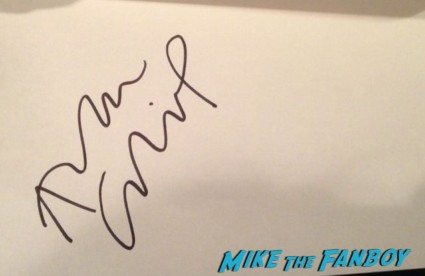 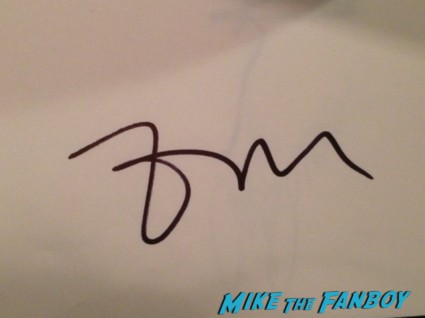 Overall, an incredibly successful evening! Anne Hathaway was actually there too but she zoomed out to her car. I even had my Les Mis poster. But apparently she signed a TON a couple nights earlier at an event she hosted. I know I’ll get her sometime this month or next anyway.

And I still can’t believe I met RACHEL WEISZ!