When it comes to animated films, there’s not one studio that has the track record of Pixar. They just keep knocking each film to of the park. From the adult oriented Up to the Toy Story Franchise, Pixar has been the premiere go to for new animated classics. Setting the car that high can lead to problems however, how can any studio keep up with their own level of quality? 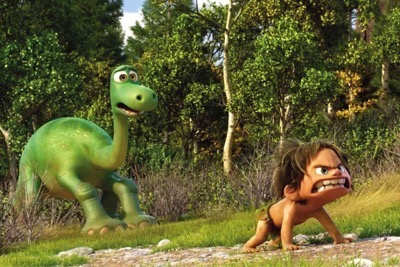 In The Good Dinosaur, out on Blu-ray February 23rd, Pixar looks at what could have happened if the Dinosaurs still roamed the earth. The asteroid that theoretically wiped out the dinosaurs back in the day has just missed the earth and the dinosaurs have been able to evolve like humans did. They have formed a rudimentary society, they farm, have built some simple buildings and even talk! 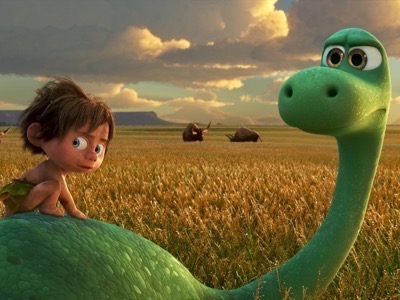 Then, we see a really large egg and out of it comes a very small dinosaur. His name is Arlo (Raymond Ochoa) and he wants more than anything to be a good dinosaur, and be just like his family, a fine member of dinosaur society. But the thing with Arlo, is that he’s a step behind, he’s a little slow to catch on, he’s not stupid, he means well but it’s going to take him an extra step to keep up with the Joneses. He gets labeled as a coward however for not being able to face the “real world.” 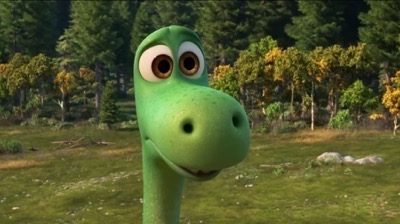 Arlo gets a shot at redemption, his Poppa (Jeffrey Wright) puts him in charge of the family’s food storage for the year and he has to kill whatever pests threaten their livelihood. Arco misses the opportunity to sets his life on the right track when he finds out the “pest” is a small human boy. Then a disaster happens and Arlo’s family is broken up and he’s separated from them. Arlo now has to navigate tough terrain and follow the human boy “Spot” (Jack Bright) and learn the ways of the “real” world as he travels home. 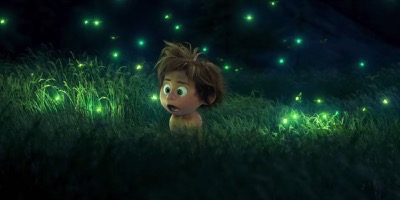 Like most of Pixar’s films, The Good Dinosaur takes a familiar theme and turns it on it’s ear. But showing us Dinosaurs as opposed to humans in society, we can reflect on our own flaws and failings. A character like Arlo is so interesting, because most of us in society are not the popular jock or class president, instead it takes the majority of society a minute to get revved up even in their own lives. That’s one of the things about The Good Dinosaur that I love. It really does give Arlo a chance to shine and become his own Dinosaur sort of speak. It also shows his parents as loving and not demeaning which is such a stereotype these days. 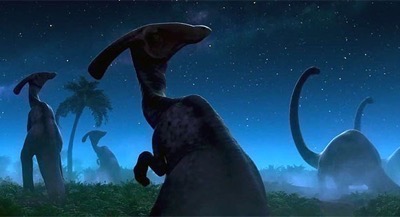 Arlo’s journey through the forest to reunite with his family is so important and parallels a lot of people’s journey after graduating high school or college and making their way in the world. It’s not as much about a task or doing something that a superior told you to do, but it’s about discovering what is inside someone, learning about yourself, being tested and God willing passing that test. 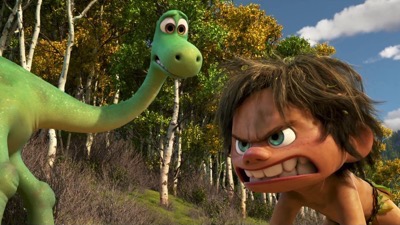 This is a very deep journey for a children’t film, but Pixar doesn’t really make films for kids. They really make films for adults and children get the spill over. What this does is create a series of films that don’t talk down to their supposed intended audience and treats them like the fully formed individuals that they indeed will hopefully be. 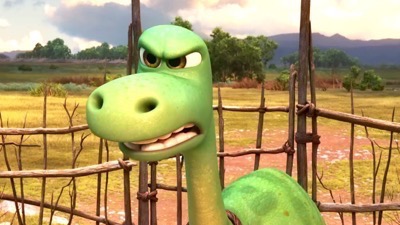 The Good Dinosaur arrives on Blu-ray in a fine transfer thanks to the Walt Disney Company. I have said it numerous times before, but I’ll say it again, high definition is made for animated films. All the shades of green are so pronounced in the film, it’s stunning to see. I think the Disney animators found different shades to symbolize what the characters are going through. It’s dark green when the characters are in danger and bright sparkling green for the times when all is right with the world. Plus, the details are exquisite, each blade of grass, the leaves all are given such attention to detail, it’s really exquisite. 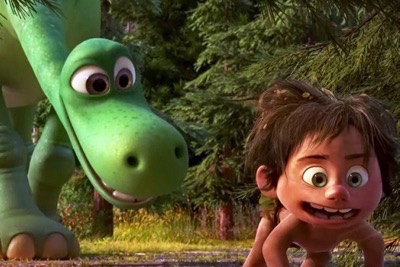 There are numerous special features on this release including trailers, deleted scenes and an audio commentary with director Peter Sohn and several of the animation team. It’s a fine technical commentary track that sheds some insight into the behind the scenes of bringing a film like this to life. 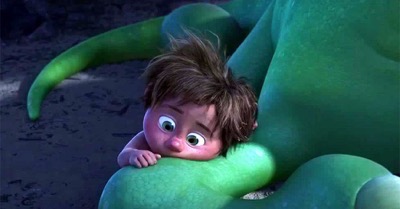 There are also numerous featurettes including:

Sanjay’s Super Team – This is a short film about father son bonding and fantasy adventures.

The Filmmaker’s Journey – A behind the scenes look at the film, including the challenges of a first time feature. It’s a fun look.

True Lies About Dinosaurs – This is a very short (under two minute) look at what we know about dinosaurs and what we don’t know.

Every Part of the Dinosaur – This is a look at the character construction and how to build the dinosaurs in the film.

Following the T-Rex Trail – The crew of A Good Dinosaur heads to a real cattle ranch to get an idea of body structure study.

There are also two features titled Hide and Seek and Dino Bites that feature the cast in playful bits. 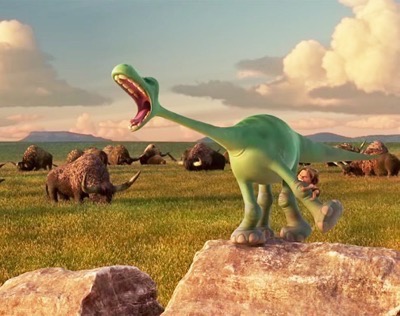 Overall, I have to say, the Pixar brand did not disappoint with this release. While it may not be as original as Up, A Good Dinosaur is a sweet tale that is full of heart. The characters are solid and it’s such a great film for kids to see. I highly recommend picking this one up!

A Good Dinosaur is out February 23rd on Blu-ray and DVD!