I have to tell you, I enjoy my Disney movies… BUT I’m not a huge animation fan. I know, I know how do I balance the two… Well… I don’t really. I generally speaking head out to the theatres to see all the Disney animated movies anyway because all my friends are so into them.

Today, MTF was invited to head downtown Hollywood to check out the latest 3D conversion of Beauty and the Beast. The Novel Strumpet jumped at the chance to watch the film, and loved it!

I know you’ve all been asking yourselves “Gee, I wonder what the Novel Strumpet’s favorite Disney Princess movie is?” Well, ask no more. I’ll tell you…it’s Beauty and the Beast. Why you ask, well….

3 minutes in Belle tries to tell a simple townsman about a book, who sends her off with a vocal pat on the head

9 minutes in Belle tells her father she bought a book in town, which he ignores

17 minutes in Gaston goes to Belle’s house to make her marry him and she’s reading. This is also the second time he gets one of her books muddy…BLASPHEMY!

Hole in book timeline because of this thing called a plot

52 minutes in Beast gives Belle the library….let me repeat….HE GIVES HER A LIBRARY…a huge ceiling to floor library. (Promptly after Belle moves her bedroom in there, but they cut that part out. Trust me on this)

55 minutes in Belle reads a book to the Beast

And then it’s just a bunch of plot. 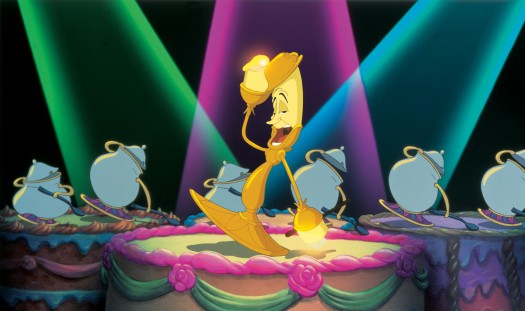 Oh, the books also help defend the castle at the end, but their big battle scene was cut so you just see them in the periphery every now and then. Such a shame.

On top of all this add in that Belle likes to make sarcastic comments that no one every realizes are ironic and take at face value, she likes to argue with people, feels like her small town is stifling with no one to really talk to and is a brunette with large eyes. Maybe I identify a wee bit…

Now you’re wondering why we’re talking about a movie that came out twenty years ago…OH MY WORD I’M OLD! Well Disney is re-releasing this gem in theatres in Disney 3D and yours truly got to see it a wee bit early.

I preface this by saying I don’t like 3D, I really don’t. It gives me a headache because too much stuff is being thrown in my face or is just stupid because it’s a rush job and not done right so it looks weird. And before you start mumbling to yourself about how I’m bowing down to the mouse let me just say I hated Alice in Wonderland’s 3D for the first reason and Nightmare Before Christmas 3D was just, eh. 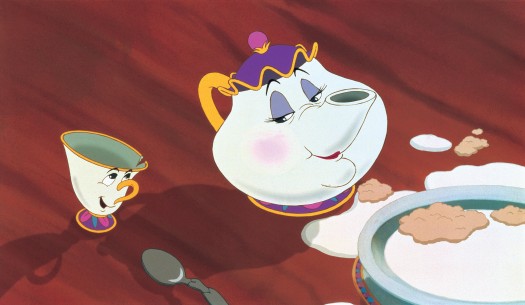 Disney did this one right. It was amazing. I mean amazing. Not only was the 3D spot on, but they had to have gone in and painstakingly cleaned up the colors as well because they were so vivid. I mean the stained glass in the opening sequences alone looked almost real, and the ballroom scene gave me chills. Then there’s the library… IN 3D…I almost peed on myself. I’m not ashamed of it, have you seen this movie? Have you seen this library? I almost reached out and took a book from the shelf. I seriously heard gasps during the opening sequence, and no, they were not coming from me. In fact they did such a good job with layering the pictures that I caught things in the scenery, background characters, ripples in water that I’d never caught before. My applause and thanks go out to everyone who worked on this because you all did an amazing job. Seriously, and Mike can tell you I don’t give kudos to people often. I almost like the small touch during the credits of some of the character sketches behind the scrolling credits. Although, my one word of advice would be to go back and not have the Beast’s human side the last picture. He was so disappointing. I mean Fabio? Really?!?

So I’m saying go out and see this re-released version if you love this movie like I do, or even if you don’t. Just go see it. 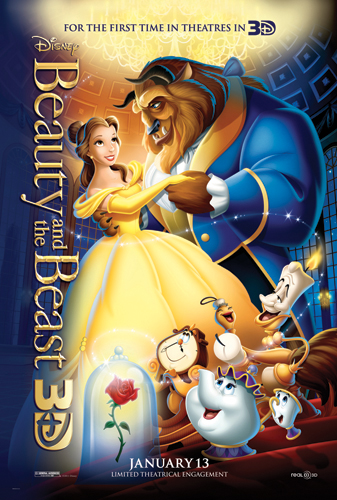 Last thing…at the El Capitan (Disney’s movie house in LA) they will do special showings where characters come out and introduce the film so the kids will be all super excited. And some of us adults, too… 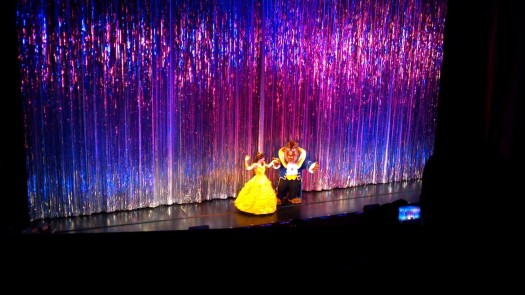 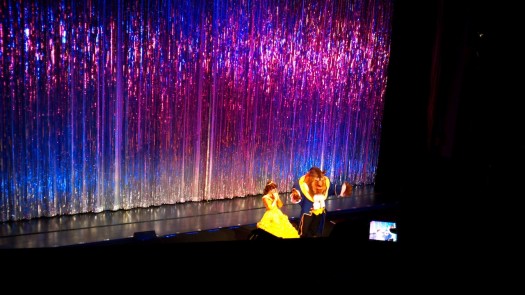