Pushing onward, I will be combining J and K because I really don’t have that many autographed DVDs that start with K. Determined to get through all the letters. I plan on having EACH letter represented even if it is only one or two titles.

1. JOHN DIES AT THE END: Not much to say here. Pretty trippy movie. Directed by Don Coscarelli who also directed the “Phantasm” series. 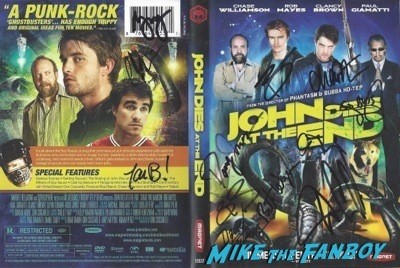 2. JENNIFER’S BODY: Do I think this is a great film? No. It is viewable. Besides, Megan Fox and Amanda Seyfried are very easy on the eyes. Megan signed it. Amanda hasn’t …yet. 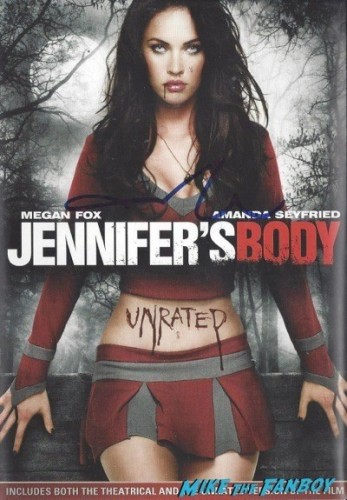 3. JACK FROST: Okay, now this movie was actually kinda entertaining. Not to be confused with the Michael Keaton film of the same name, this is about a killer snowman. Definitely more comedic in nature. It has it’s moments. It is signed by the voice of Jack Frost, Scott MacDonald. 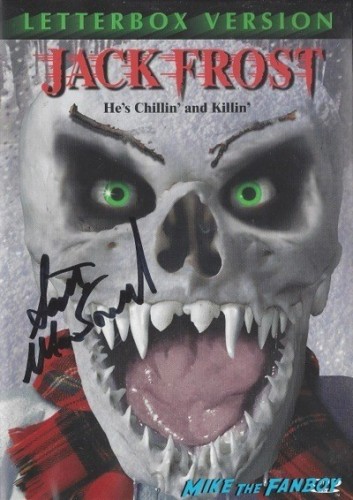 4. JACOB’S LADDER: Went on a first date to see this movie back in the day. Not sure whether this is a first date kinda movie. Signed by Tim Robbins and director Adrian Lyne. 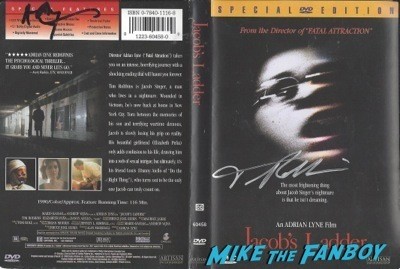 5. JEEPERS CREEPERS: I know this movie turns off people for reasons I won’t dredge up here, but I think this is a great horror film. Try watching the film with no prejudgement. I think you will have a good time. 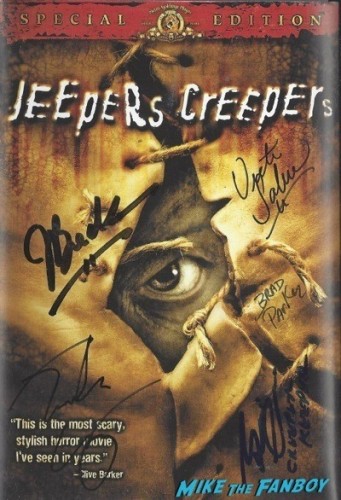 6. JU-ON: Another foreign film makes it onto the list. Before “The Grudge”, there was “Ju-on”. Boy is it FREAKY! It is signed by director Takashi Shimizu (who also directed the American remake). 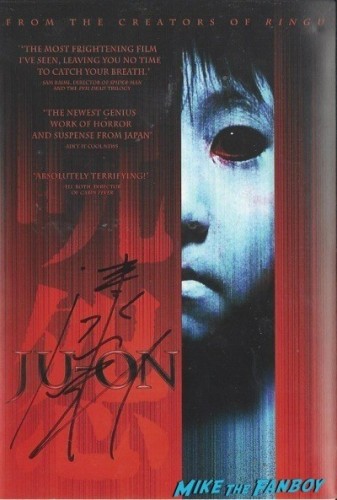 7. JASON AND THE ARGONAUTS: Before all this CGI and greenscreen took over everything was either done live action or stop-motion animation. If you were going to go with stop-motion animation then the man you HAD to go see was Ray Harryhausen. His work is legendary. Check out that army of fighting skeletons! Ray passed away in 2013 but he was always nice to his fans and supportive of aspiring artists. The DVD is signed by Harryhausen. 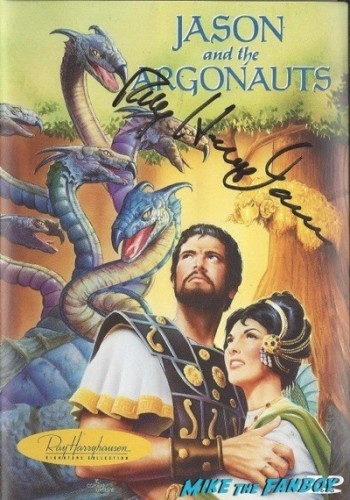 8. JOY RIDE: Sure everyone thinks of “Fast and the Furious” when you mention Paul Walker, but for me it was all about “Joy Ride”. Definitely a hold onto the edge of your seat film. Walker left us way too soon. His generosity to fans is well documented. I only had the opportunity to meet him once and he was glad to sign. It was also signed by LeeLee Sobieski, Steve Zahn and Ted Levine. 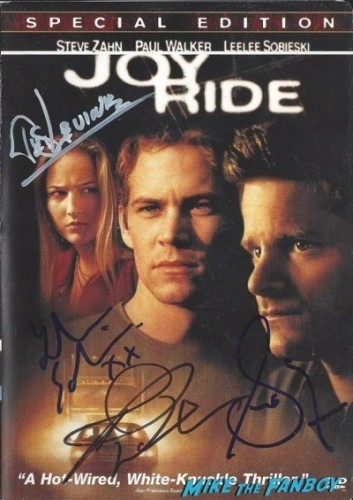 9. JAWS: What “Psycho” did for showers, “Jaws” did for beachgoing. This was the vehicle that brought Steven Spielberg to worldwide attention. Great acting by Roy Scheider, Robert Shaw, and Richard Dreyfuss. Unforgettable score by John Williams. It has been signed by Spielberg and the unfortunate first victim of Bruce the Shark, Susan Backlinie. 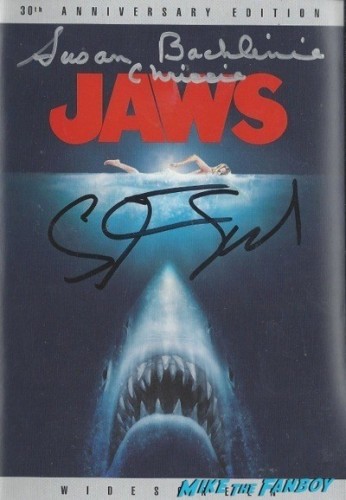 10. My top pick for J is ANOTHER Spielberg classic, JURASSIC PARK. Great great great film! Signed by Sam O’Neill, Laura Dern, and Jeff Goldblum. There were originally only 2 sequels to this film, but 14 years after Part 3, Spielberg is busy working on a new installment as I speak called “Jurassic World”. 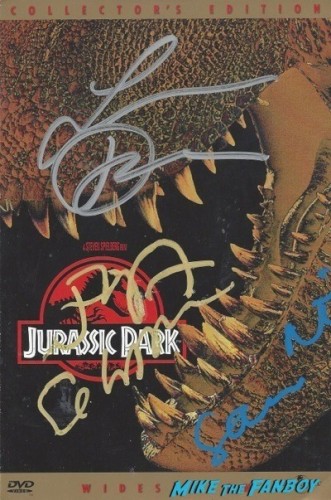 In an abbreviated bonus entry, I present the ABCs of Sci-Fi Horror Letter K!

1. KING KONG 1976: I enjoyed the movie as a kid…before I knew how big a jerk Jessica Lange could be. At least Jeff Bridges appreciates his fans. 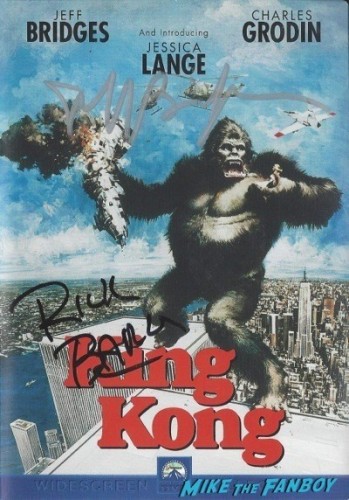 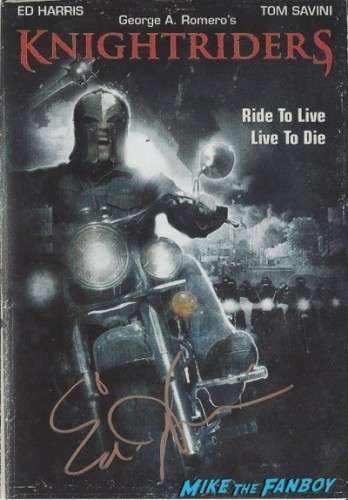 3. KING KONG 2005: Peter Jackson did a great job with this update. Signed by Jack Black. 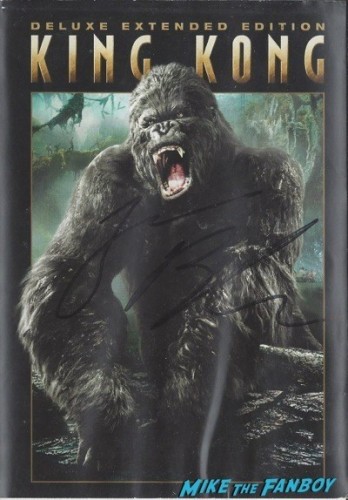 4. KICK ASS: Yeah yeah yeah…I know. WTF! This ain’t horror! This ain’t sci-fi! Chill out and give it a rest. This film gets pretty gory and I liked it and this is my list. Signed by Aaron Stanford, Christopher Mintz-Plasse, Chloe Grace Moretz, and Nicholas Cage. Cage was really super nice when I met him. Signed multiple items and even agreed to a photo op. Classy guy! 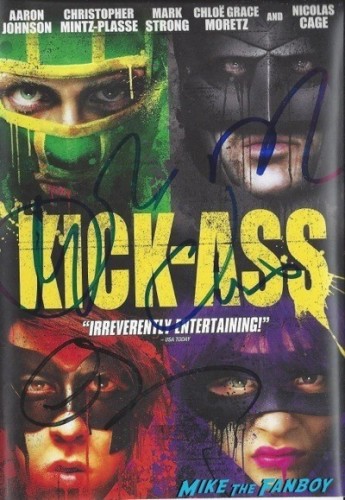 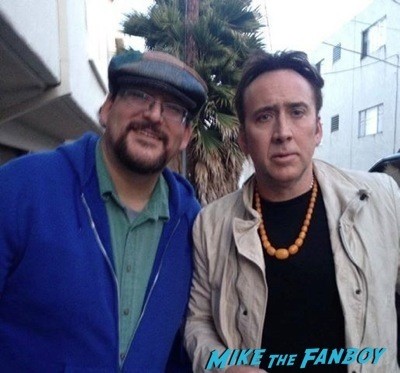 5. KILLER KLOWNS FROM OUTER SPACE: Not a shbby choice for my top pick. Awesome film from the Chiodo Brothers. I wish they had included the music video by The Dickies but oh well. Maybe they will release a special edition of this film with the video as a special feature. It could happen! The DVD was signed by all three Chiodo Brothers (Stephen, Charlie, and Edward), composer John Massari, as well as actors John Allen Nelson, Grant Cramer, Suzanne Snyder, Mike Martinez, Harrod Blank and the late great John Vernon. 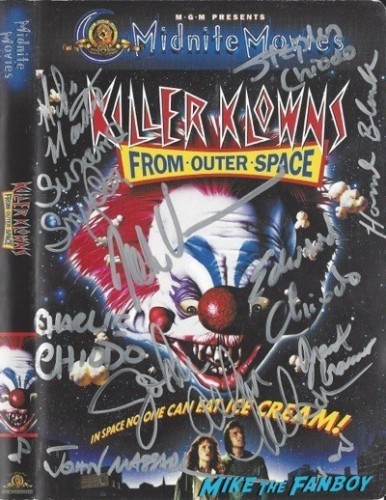 Okay, so seriously that’s it for this time. See you next time for letter L!