Home / Reviews / Above The Shadows Movie Review! JM Says, “Some sucker punches hurt, then there are those kicks in the teeth!”

Some sucker punches hurt more than others. Then there is a kick in the teeth after a flurry of fleeting moments with “Above the Shadows.

Starring Olivia Thirlby (“Dredd” and “Juno”) and Alan Ritchson (“Blue Mountain State” and “Teenage Mutant Ninja Turtles”), this supernatural tale follows Holly (Thirlby) who has faded from oblivion after her mother’s death. Moonlighting as a photographer for “Gotcha!” magazine, she is stalking out a new celebrity target when bouncer and disgraced MMA champion fighter Shayne Blackwell (Ritchson) spots her leaving the VIP section. 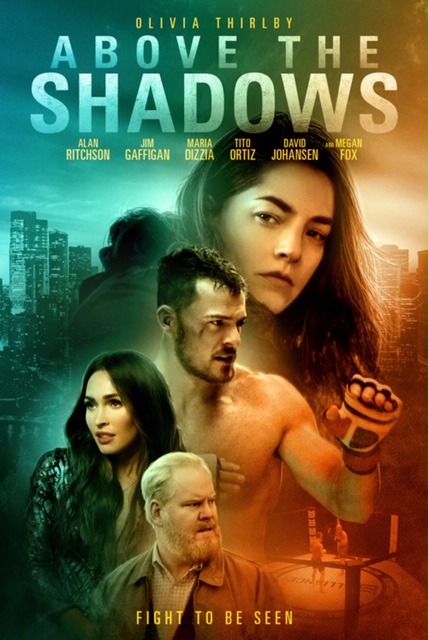 Shocked someone sees her for the first time in nearly a decade, Holly seeks out the truth and discovers her tabloid photography ruined his career. Looking for redemption and reconnecting with society, she decides putting Blackwell’s career back on track might be the way to save her own life.

Much like a boxer trying to duck and weave against a Heavyweight, the film never quite finds its footing before falling flat on the canvas. Olivia Thirlby can create dynamic characters and almost always immediately draws me into a movie when I see her name attached. Sadly she stumbles once again with a mismatched movie. The film frustratingly fails to balance the supernatural elements, romantic relationships and fantastic fighting background creating chaos. Honestly, it’s like a fighter flailing around and running around the ring/octagon waiting for the bell to save the match. 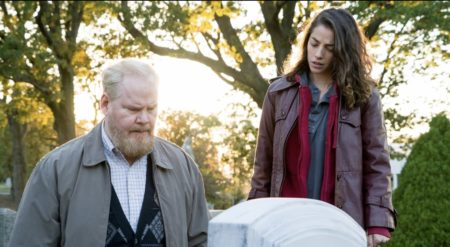 My heart sank with every frame failing to develop deeper. Honestly, if the film focused on one of the story concepts the movie would have been way more enjoyable. The only saving grace was Alan Ritchson. He was brilliantly and beautifully cast as lovable loser Shayne Blackwell. Ritchson transformed into another awesome character and whenever not on screen, makes you want to see Blackwell more. Ritchson’s remarkable performance certainly could’ve used more development and unfortunately underutilized despite pitch perfect casting. From the moment Ritchson first appears, I immediately believe the truth and despair in his eyes and every moment believe he is an underdog searching for redemption.  Sadly, the one saving grace gets lost in the mix by inconsistent, incredulous characters. 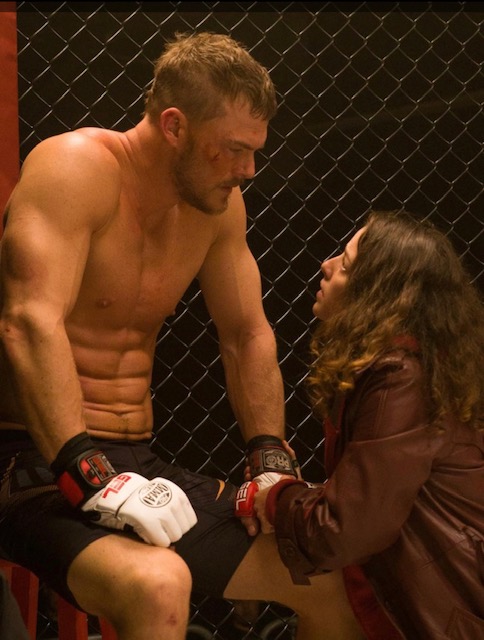 Unlike “Warrior,” “Southpaw,” and “Bleed For This,”  “Above the Shadows” can’t capture quite the essence of a quality fighting film. This rumble tumble tends to avoid any and all substantial action. Much like a timid fighter following a mediocre bout, this movie relies too much on the judges for a quality decision. Unlike a split decision determining whether it’s worthwhile, the movie falls flat quicker than a TKO. If only the fight sequences and backstory were enhanced further, maybe it might be worth a shot. Instead you’re left squirming in your seat scratching your head with a film failing to identify its genre.

The miscast Megan Fox perfectly utilizes her true talents- being eye candy. For the life of me, it astounds me how anyone can compliment her acting abilities. Fox’s atrocious addition almost pulled me even further away from enjoying the movie even more, but luckily she’s barely in the film. Certain celebrities can’t act and it’s time to accept that reality.

Jim Gaffigan, Tito Ortiz, and David Johansen compliment Olivia Thirlby, Alan Ritchson and Megan Fox for a cool cast on paper, but none of their characters are fully flushed out. Early in the film Gaffigan’s galvanizing hairpiece made me want to reach out and rip it off. Unless his character’s insecurity warranted it, the hairpiece failed to make him look younger. It couldn’t capture my attention without warranting a knee jerk reaction of a noticeably bad wig. Criticizing comic Jim Gaffigan is a tragedy because his hairstyle and wardrobe disastrously distracts from his performance. Overall I felt frustrated by wardrobe and the storyline for everyone. 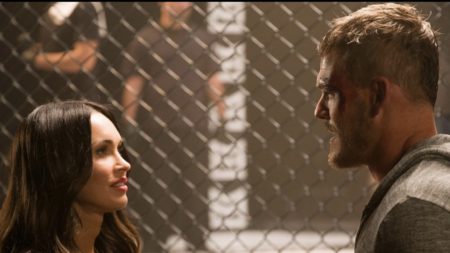 Honestly, why would anyone allow such an atrocious wardrobe malfunction make into the final film? Sorry I needed to rant especially since it had no bearing on the plotline or justify a throwaway joke. I really rooted for “Above The Shadow,” but much like a bad PPV fight the hype can only last so long. It’s definitely different, but I would wait until it’s streaming before boldly choosing.