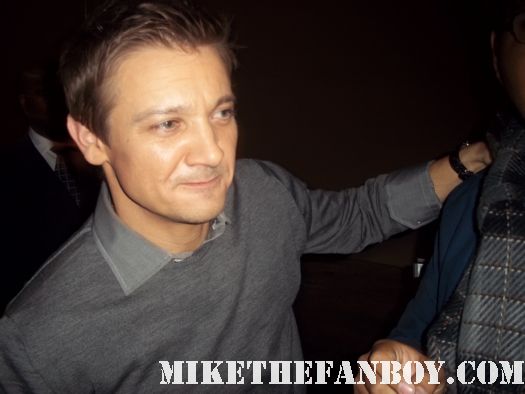 I haven’t seen The Town yet, I know I know… I saw a small part of it, but haven’t been able to sit down and see the whole thing. I’ve head Jeremy Renner was amazing in it however. Well, everyone’s favorite Christian Bale fanatic who is in love with printing 4×6 photos just sent in this report from his encounter with Mr. Jeremy Renner. Apparently, he is super cool. Which I kind of assumed. I personally have never met Jeremy but the Avengers is coming up so it’s only a matter of time! LOL… Anyway, check out CB’s personal and intimate account of meeting Mr. Renner after the jump!

Hello Everyone, its everyone’s favorite Christian Bale FANN!!!…I asked Mike if he wanted to go to Jeremy Renner, and he said, who? I’m like, REALLY?? Well, Jeremy has been in some great movies, “The Town”, “Hurt Locker”, and he will be playing Hawkeye in the new Avengers movie. I was hesitant to go since I already got my “The Town” poster and 8X10 photo (SHOCKER!) signed by him last year, but I had this THOR poster lying around and after some worldwide web surfing, turns out Hawkeye makes a cameo in Thor…and here i GO!…..armed with my 4X6 and Thor poster…..

4:00- I arrive and I’m the only person here…sigh, and I thought I was running late…
4:01-YAY! Another fan is here. He liked Jeremy in “The Town”, and brought his “Hurt Locker” photo to hopefully get signed.
4:30- I get some info that he stiffed some dealers at the Oscar Luncheon earlier in the day….that’s good or bad….most of them are still over there
5:00 two girls arrive and they are huge fans…yay, we are up to FOUR people…
5:30: Mike calls it an Artic tundra, but he’s from Michigan…..let me just say, its cold!!!
6:10-the doors are opening…and it’s JEREMY RENNER!!!!!!!! We call for him, but he’s a pretape and he has to go inside.
6:15 Amy Sedaris Arrives……..
6:30: Dr. Phil arrives to grasshoppers………….no, maybe a photo called him over….
6:57 the security is moving…its JEREMY…he’s leaving …The SIX, YES SIX fans yell for him and he comes right over… I ask him about his cameo in Thor and if its true…he says yes and says the director may or may not cut it out…he doesn’t know whats going to happen… 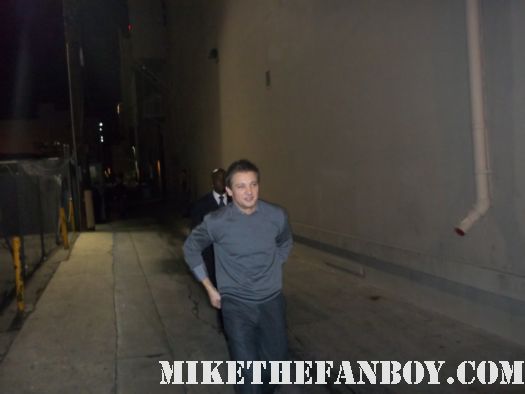 He’s super nice and takes pictures and signs autographs…well, he takes probably seven pictures total and signs maybe three autographs? No one really had anything for him to sign, everyone wanted a picture with the guy, but he was super nice… Best part is there were only one pap and no dealers. I got my Thor poster and 4X6 signed…good day indeed… CB out! 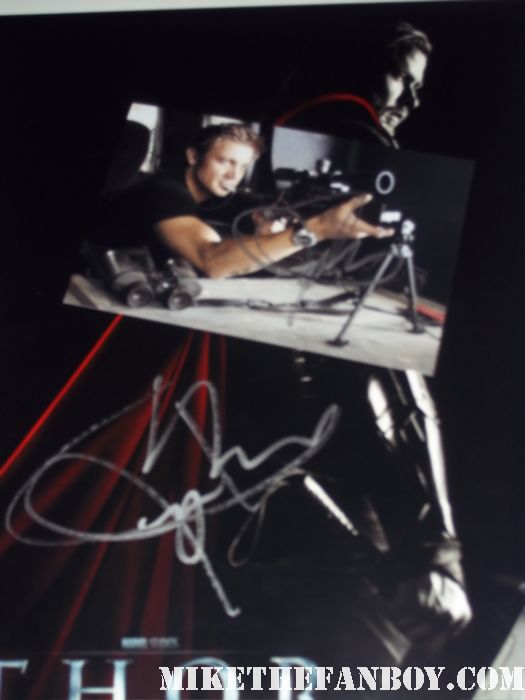