Hey kids!
Perhaps you read my earlier article about Henry’s Tacos and the awesome event that Aaron Paul and Elijah Wood put on to try and say the Studio City landmark. I promised that Ace would have a further account of the day and as promised here it is!

I had to take off pretty quickly after meeting Elijah Wood because I was going to see The Hobbit. LOL… Only in Los Angeles, well Ace was cool enough to take my Breaking Bad Press Kits and have Aaron sign them for me. #awesome!

Check out his recap after the jump!
M-

I am very privileged to be among the Studio City community. As an avid twitter follower, I stumbled upon a Studio City tweet. Apparently, Henry’s Tacos, an essential part of my community, is being ripped away because of an un-sympathetic, disgruntled landlord. There is no doubt that Henry’s Tacos is an architectural landmark. It has stood peacefully for fifty-one years… As soon as Janis Hood, owner of Henry’s Tacos, asked for a very well earned, established landmark title, she was retaliated by her landlord. Just imagine, fifty-one years, and then you are marked up 150% all because you want to protect your livelihood. 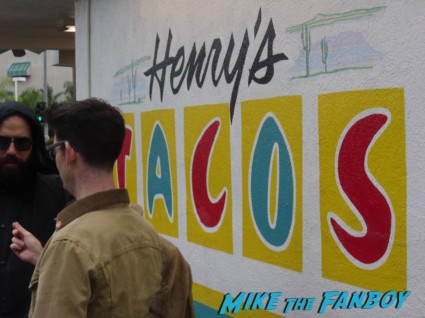 Notable people from all circles of life have eaten at Henry’s Tacos.

Officers Reed and Malloy came by for dinner in Adam-12. 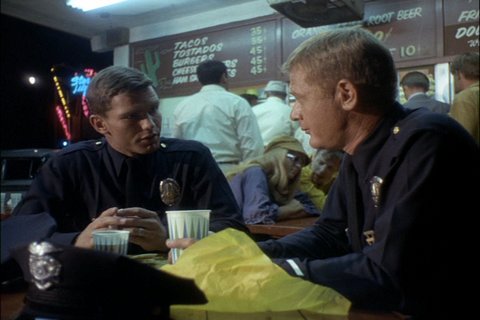 The moment I heard two amazing actors such as Paul (BREAKING BAD!!!) and Wood (LOTR!!!) were going to be in my neighborhood, I was gleaming with joy!

George paid for tacos for an hour of your time… Aaron Paul stood for five hours meeting fans and signing autographs… Elijah Wood also met fans for 2-3 hours… It was amazing… Onto the recap! 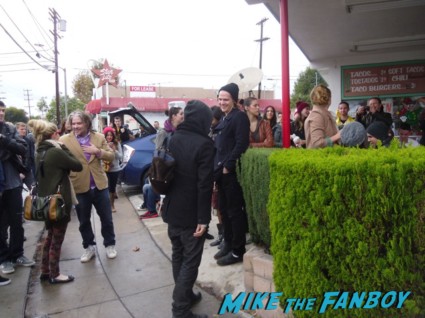 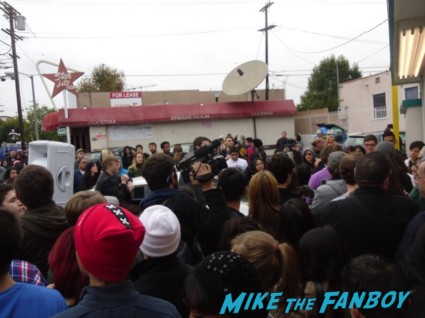 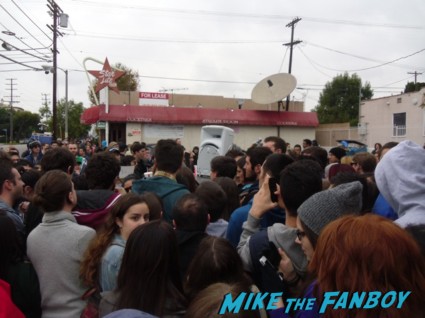 Immediately within moments saw Angela Kinsey… I waited patiently. She was talking to a few others so I didn’t want to disturb. 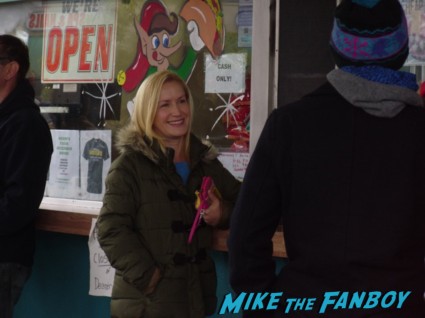 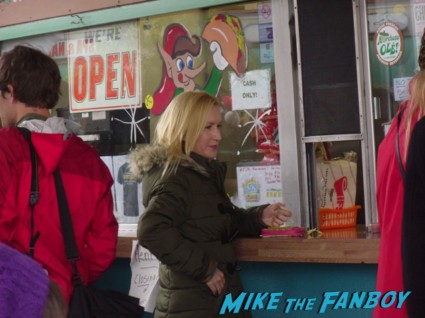 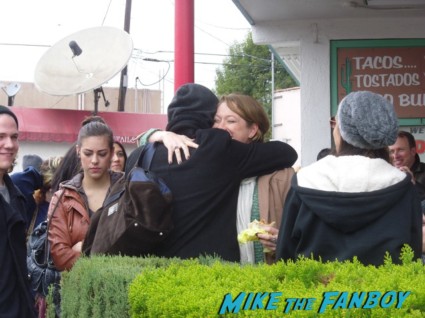 12:52- Aaron Paul arrives! Crowd isn’t bad at ALL… I waited though… I knew he was going to be there all day so I didn’t worry… Boy! I was silly! 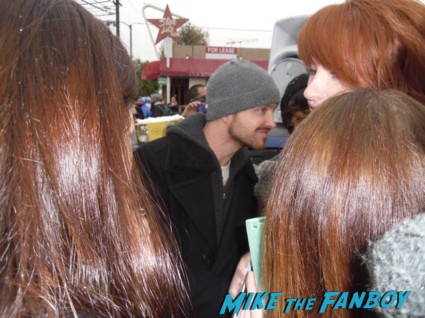 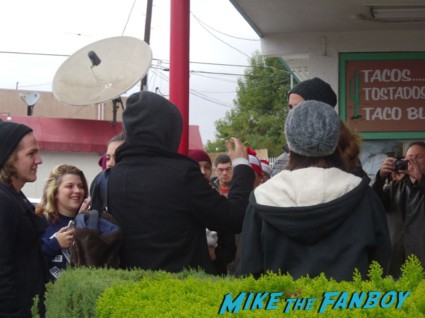 12:56- I knew all the crowds gravitated to Paul! Therefore, I asked Kinsey graciously! She was really sweet! Very Down to Earth! I love the Office so it meant a lot! 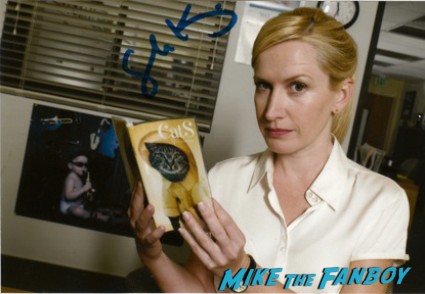 1:14- Got my tacos! You never know when its going to be the last time, even if you do live close!

From there, I lost track of time! It was nuts! According to the customer count, there was over 500 people there trying to greet Aaron Paul! 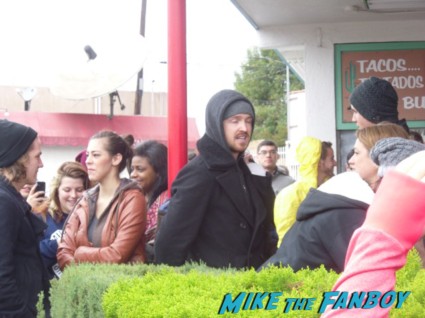 I really made an effort to enjoy myself. There was so many people there that I hadn’t seen in years! After eating my taco, I made an effort to jump in the “free for all.” Of course, it was slowly getting crazy! Aaron was so cool. He is really a class act. 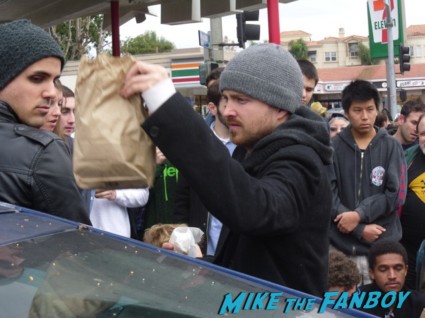 During the summer, I went crazy on shows I had never watched… In a matter of days, I got hooked and finished the pending series from Breaking Bad to Sons of Anarchy. Therefore, meeting the infamous “Jesse Pinkman” was such a great honor!

I was merely anticipating the utter of Jesse’s infamous word: B*TCH… He said it many times throughout the day… I was very thrilled! When I finally got to him, he signed my three press release photos and a mini poster… 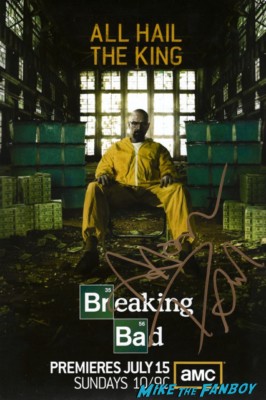 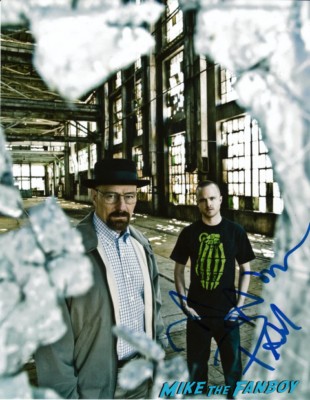 That would only be a start… I sort of went crazy on the autographs… You never know the next time you will get someone! Plus, I have a plan to get them dual signed with Cranston! Of course, time will help this out!

After getting Paul the first time around, Two O’clock was nearing… I read on twitter that Elijah Wood was heading over… I made a brisk walk to my home… Went crazy! Grabbed the three DVD covers and ran out of the house… Wood was already there! 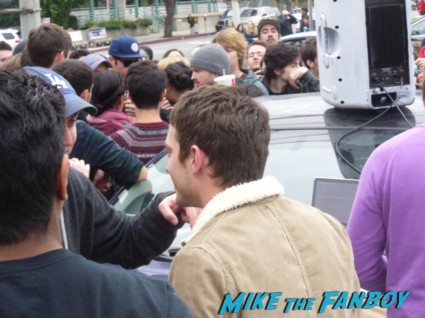 Elijah Wood was really cool! As soon as it was my turn, I handed him my gold sharpie and he gracefully signed my three DVD covers… 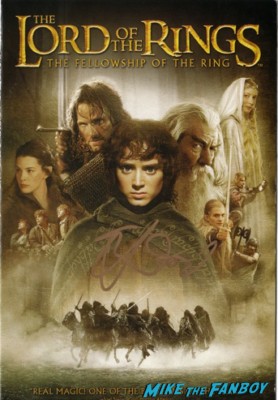 From that point, I ran back home… First, because I wanted to put my stuff away! It was sprinkling on and off… Second, because I knew I had an Entertainment Weekly Magazine and a couple LOTR booklets in my collection. After grabbing them, I ran out of the house once again!

At that point of time, I ran into Scotty and Garrick (I believe that is how you spell it). I was really happy because I was terribly bored! There was no one to talk to! From there, I sought to nab Elijah Wood and Aaron Paul once again! 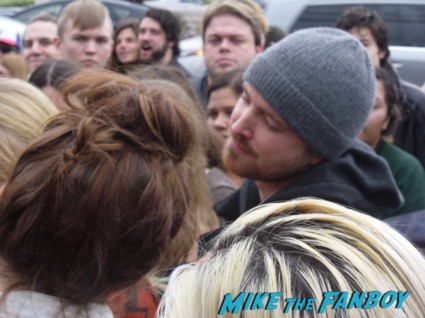 Mr. Mike, from Mike the Fanboy (maybe you heard of it lol), arrived and he sought to grab both of them… Mike, Scotty, and I played chase with Elijah as he was walking around in crowds. As Wood came back toward the taco stand, Mike and I got him! 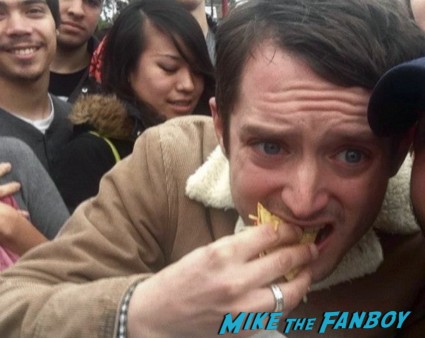 After eight years, the Entertainment Weekly magazine came to good use… About five years back, I almost threw it away. I am so glad I didn’t! Mike got his Wilfred stuff signed, and I, of course, got LOTR stuff graphed…

From there, we got back in Aaron Paul’s crowd… After trying to infiltrate line for thirty minutes, Mike had to leave…Scotty, Garrick, and I made it a mission impossible adventure to finish up their pieces and take Scotty’s photo… The music was soooo loud! I am sure I was hallucinating… The Grinch theme song soon drifted off as Mission Impossible cued in… 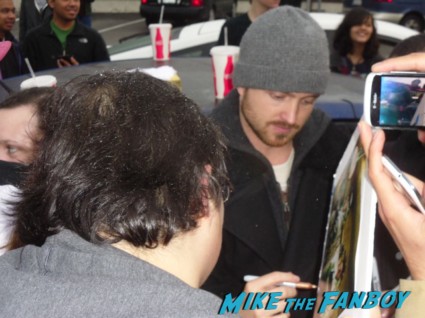 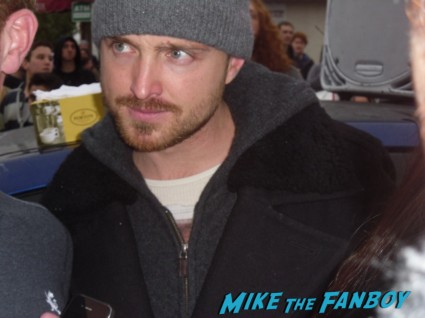 As the crowd CRUSHED the three of us, we tried to hold on… We shifted many times and stood motionless most of the time. A smelly drunk and a very rude, pushing family surrounded us… Regardless, we succeeded. Scotty got his photo… The three of us finished out pieces. Scotty and I had to tag team because the crowd was unbearable.

Henry’s Tacos closes on the 31st of December… PLEASE head on and take advantage of it! If you can, please sign the petition to save it!!!

Maybe, just maybe, a Holiday miracle might happen to save it! 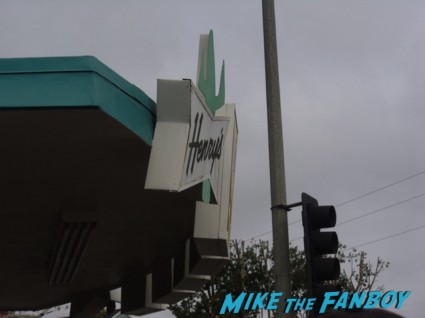 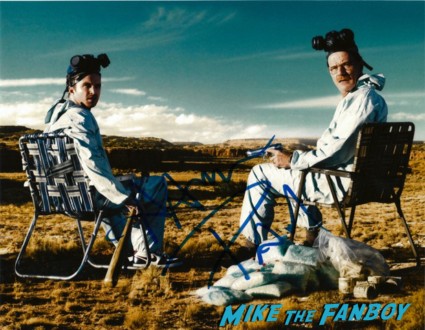 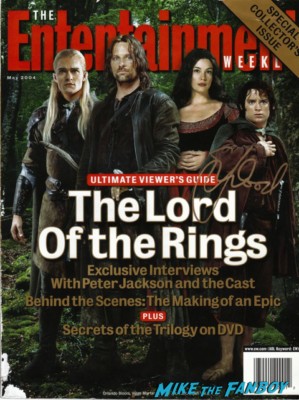 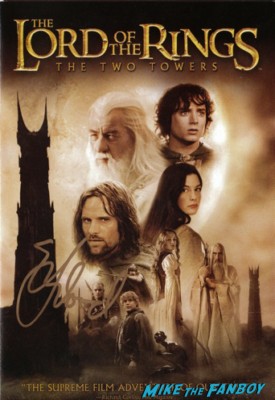