Silver Rose Entertainment, Inc. (SREstudios.com) has teamed up with FilmGrouch.com creator Rick Swift to bring the character Tactical Girl to life. She is as lethal as she is pretty; easy on the eyes, brutal to her enemies, and she can actually field-strip more than a flash light.

The comedy series follows Tactical Girl (or TG), played by Julia Ling, as she faces the civilian world from a strategic and calculated perspective. Julia, best known as fan favorite Anna Wu on NBC’s “Chuck,” is more than capable of taking on the physically demanding role.

“Julia does more than just play the part,” says SRE Studios producer Micah Haughey. “She embodies it. She’ll hike with a 100-pound pack in the pouring rain or crawl through the mud – and she stays motivated through it all.” 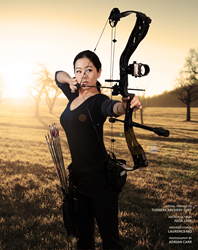 Everything that Tactical Girl does “has to be tactically correct,” says Ling. This requires her to take the time to study and train for every aspect of the character. It’s a challenge she relishes. According to Ling, “It doesn’t matter how tired you are, how much everything hurts. You get back up, and you never quit.”

She brings the same fierce determination to her work behind the camera as a writer and producer on the series. Haughey notes, “Whether it’s training or producing, she’s not afraid to jump in and get her hands dirty, and she puts her team first.”

Tactical Girl can disassemble and reassemble her 9mm with her eyes closed and build an AR-15 from scratch. But her weapon of choice is her trusty bow. Not one to tackle anything lightly, Ling enlisted NTS Level 3 archery coach Laurence Mo to train her for both the series and competition. Mo noticed how quickly Ling picked up the sport, “Julia is one of the most dedicated and hardworking archers I’ve ever met. Excellent elbow alignment from day one. I can see a bright future in her archery career.”

The series blends comedy from the world of uniformed personnel (police, firefighters, EMTs, military) and normal civilian life. Swift, series co-creator, draws from his time in the United States Marine Corps for some of the funniest material.

“I remember watching Full Metal Jacket with my dad and laughing at the DI. I asked him how you keep from laughing, and he said, ‘easy, it isn’t funny when it’s happening to you.’ I think that’s always stuck with me, how ridiculous some of the situations are and how ripe for comedy military life is. It’s my hope we capture some of that insanity and it gets a few chuckles from those who serve or have served.”

Rather than the standard narrative format, Tactical Girl is modeled after stand-alone sketches like the Digital Shorts from Saturday Night Live. The series currently airs on YouTube at YouTube.com/TacticalGirl.

Most notable for her work on prime time television, Julia Ling starred as the popular “nerd-herder” Anna Wu on Chuck and Kim Tao in Studio 60. She has directed and produced many commercials and independent films. You can see her full list of credits at imdb.me/julialing.

Filmgrouch.com posts whatever the hell they want about films and pop-culture. They have one real rule when it comes to film or anything else… ENTERTAIN US!
Twitter: @filmgrouch or @rickswift
Facebook: @filmgrouch
Google+: +RickSwift
Pinterest: @filmgrouch
Snapchat: @filmgrouch