So, the sugar bombing incident heard around the world. Now, I think we’ve all heard about what happened that fateful day, but I was talking with some fans who were on the scene, and I asked them to recap what happened from their perspective. I just think it’s interesting to get a first person account of everything.

Plus, look. It’s a crazy world out there, we need to always be safe and try and make events enjoyable for the fans and celebrities.

Check out the Adam Levin Sugar Bombing incident recap below!

This is what I saw before, during, and after the Adam Levine sugar bombing. It was such a freak and fast incident, no one could even fathom that it could have happened. Prior to Adam coming over, the culprit was trying to horn in on a conversation I was having with other fans. He was bragging about being on the FBI list for hiding in a bathroom for trying meet Hilary Clinton. We all just thought he was weird and just saying things to sound cool. He walked away for a while and did not come back until Adam was coming over.

Adam was nice enough to come over and start signing. 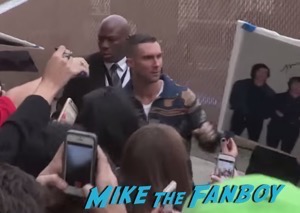 He started at the end of the row where fans who had just run up seconds before were getting him to sign. Those of us who had been there for hours kept saying how we’d been waiting. Adam heard us and came right over. 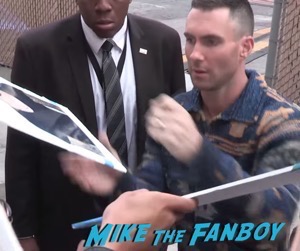 Right as I was about to get him to sign my picture, the sugar came flying. Security grabbed the guy, and the fans behind him pushed him over the barricade. Nobody knew what the white powder was including those of us in close proximity. We were all scared at this point as many of us had been hit with it too. Afterwards, we were all comparing notes as to what we saw, and finally saw the powdered sugar bag on the ground. Security came back over to get the bag. After a short period of time they came to assure us it was sugar. 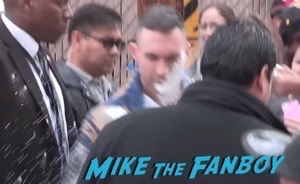 We were all wondering what this guy thought he was doing. There were so many people behind him. Did he really think he could toss the sugar and run away? Even as a prank, what satisfaction was he gaining? I mean, no joke is worth being arrested, and prosecuted. I guess a freak fan may get off on seeing himself on the news. From what I have heard, he has Adam has pressing 5 counts of battery against him. This guy ruined everything for Adam, the fans, and for himself. Such a waste dude! You deserve to be punished for such a thoughtless act.

Note to self and fans: If someone mentions they are on the FBI list….even if they are just “talking big”…..alert security or get everyone around you to urge him/her to leave.