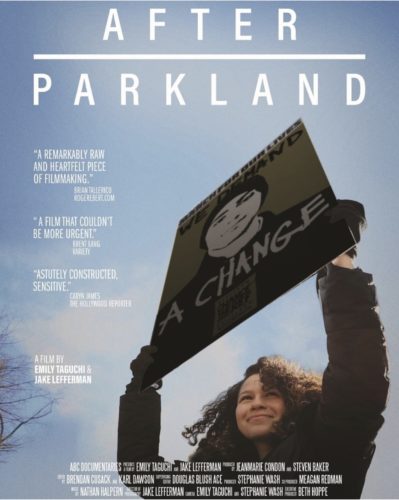 Tragedy transforms a community, but what happens once the news cycle ends? “After Parkland” is a transcendent, thought-provoking documentary detailing the aftermath of a national tragedy and actually listens to those impacted instead of pushing a political agenda.

On February 14, 2018, the world was introduced to the community of Parkland after the school shooting at Marjory Stoneman Douglas High School in which 17 people lost their lives. Filmmakers Emily Taguchi and Jake Lefferman developed trusting relationships with students and families impacted by the tragedy not knowing it would inspire a nationwide student movement. Seniors Sam Zeif & David Hogg, freshman Brooke Harrison, parents Manuel & Patricia Oliver and Andrew Pollack discuss the immediate impacts of adjusting to life after the Parkland shooting. Family and friends attempt to console those most impacted, but the film captures the most difficult challenges as they each reflect on their grief. 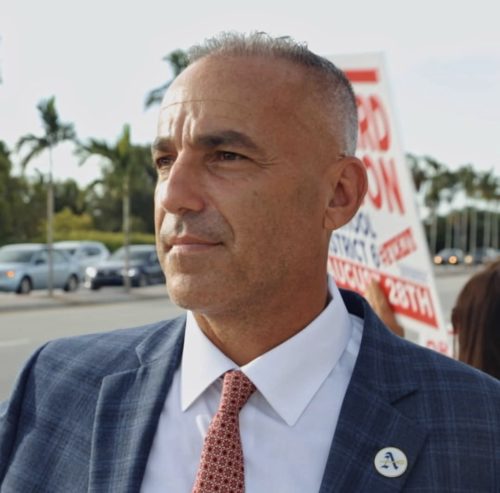 For a generation, school shootings have sadly become the norm with many politicians and educators encouraging the practice of “shooting drills” alongside fire, earthquake and other disaster drills. I still remember when my innocence was lost on April 20, 1999, after the Columbine massacre in elementary school. Not even a decade later I was in total shock during my last semester of high school on April 16, 2007, when my political history class discussed the Virginia Tech shooting in real-time to start off our day. Sadly, it’s only gotten worse. These terrible tragedies of school shootings were once isolated incidents, but have become too frequent. Unless it occurs in your community, the “thoughts and prayers” disappear rapidly once the news stops covering as people try to reclaim their lives. 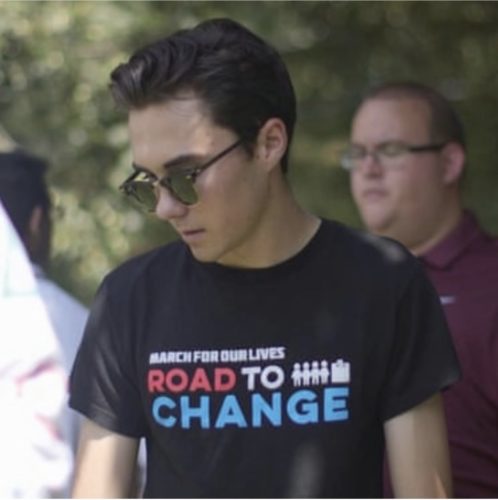 In a Washington Post article published on April 20, 2018, discussing school shootings, “more than 240,000 students experienced gun violence” at 249 schools with 147 individuals killed and 310 injured since Columbine. The sad reality is not all of these incidents gain exposure as some are covered by a single publication, whereas the deadliest like Parkland, receive massive media exposure for multiple months and linger long after the cameras stop rolling. Unfortunately, this type of coverage keeps resurrecting and possibly causing irreversible psychological issues and triggers Post Traumatic Stress Disorder (PTSD) as individuals seek to rebuild their lives. Unlike previous shootings, students such as David Hogg refused to adamantly accept “it’s one of those things”  and recognized the importance of keeping media exposure alive to address “the elephant in the room” about gun control and gun safety. At one point, Sam Zeif bares his soul in the White House with other shooting victims and families emphasizing the necessary need for gun reform while receiving consolation from a Sandy Hook mother. Zeif reminds the media, Australia swiftly stepped up and radically changed gun laws after the Port Arthur massacre in 1996, so why can’t the US do the same?

“After Parkland” phenomenally listens to the viewpoint of its subjects without pushing politics and actually bears witness, almost silently listening without integrating themselves into the story. Throughout the aftermath of Columbine, Marilyn Manson received much of the unnecessary blame and seemed more of a distraction diverting attention from the real underlying issues of mental illness, bullying/persecution, depression, and gun access. However, Manson’s provocative, poignant and repeated response to what he would do and say if the kids were here today still resonates, “I wouldn’t say anything. I’d listen to them, which no one else did.” The filmmakers clearly took this message to heart and implemented that style to their filmmaking. 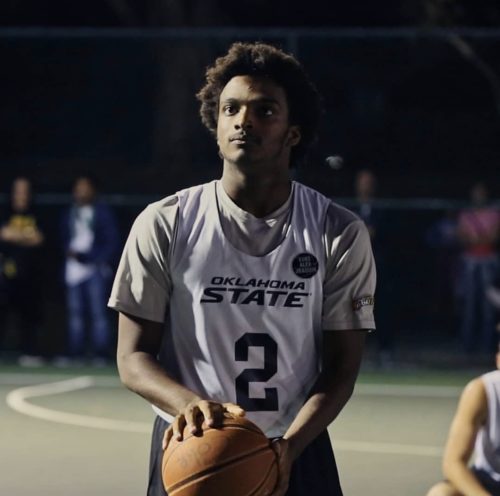 The exceptional emotional experience of seeing the Never Again movement come into fruition and how the community was transformed beautifully captures courage before your very eyes. Being able to simply watch and listen to a documentary was quite refreshing. Politics are only mentioned when it’s introduced by the subjects and even then it’s treaded lightly depending on the individual. In the case of Andrew Pollack (father of victim Meadow Pollack), he tries to encourage better school safety, which inevitably leads to Florida Senate Bill 7026 a.k.a. the “Marjory Stoneman Douglas High School Public Safety Act,” but Pollack admits in the documentary gun control is a whole another topic and school safety should be the immediate issue addressed. On the flipside, artist and creative director Manuel Oliver (father of victim Joaquin Oliver) founded Change The Ref to address proper gun safety and empower the next generation to fight for their values.

Parkland survivors Emma Gonzalez and David Hogg became the two centralized figureheads most associated with the tragedy and their open criticisms about gun violence made them instant celebrities and activists. Unfortunately, since they openly criticized politicians, the gun lobby (NRA) and “adults turning a blind eye” to these shootings, both Gonzalez and Hogg kept the discussion going, but not without constant conspiracies and threats being hurled at them daily (which is lightly touched upon in the film). Emma is shown briefly in the film, but David does receive his fair share of moments and how his family, including his then freshman sister Lauren, are adjusting to the aftermath and attention received. Fortunately, the film focuses not on one individual, but the spectrum of how significant-others, siblings, parents and loved ones are also recovering from the aftermath besides the students and faculty on the campus that fateful day. 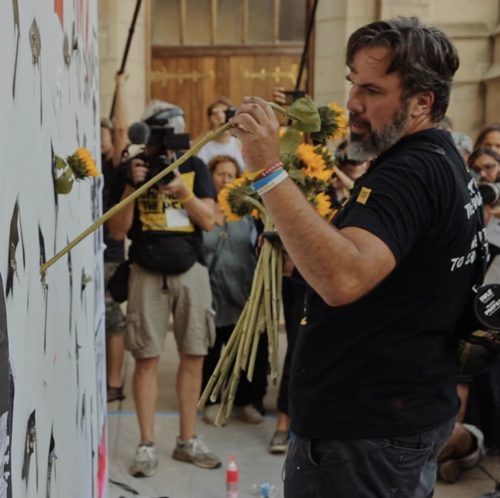 The film serves as a touching tribute, but at times seems evasive with what needed to be addressed and doesn’t necessarily ask the difficult questions. There are times I wished someone like a Morgan Spurlock, Michael Moore and/or Steve James-type tackled the uncomfortable questions, such as when Pollack avoids addressing the ban of AR-15s and gun control directly. Then again the filmmakers focused on the positive instead of the negative like avoiding to acknowledge the shooter’s identity. However, the interesting insights with each individual interviewed could’ve warranted their own distinct documentary. Sadly, the film frequently seems unnecessarily unfocused while trying to document a pivotal moment in history while simultaneously remaining sensitive in real-time. 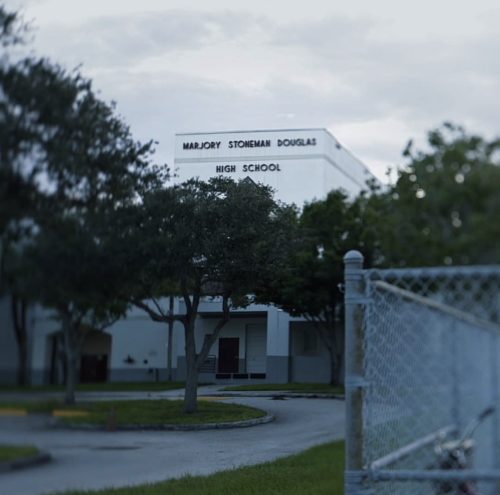 Without a doubt, the film’s heavy subject matter will create an emotional rollercoaster so be prepared to have your tissues ready. The portrait of resilience of today’s students should shed light on what still needs to be done and as reiterated countless times by students, we need to let our children and communities feel safe once again. Hopefully, one day we won’t immediately associate tragedy whenever Parkland, Sandy Hook, Columbine, Borderline, etc. are mentioned. “After Parkland” is this generation’s “Bowling For Columbine,” but with less humor and more heart. A good documentary entertains while a great one also inspires conversation.  No matter what your thoughts are, we shouldn’t forget the 17 innocent people who lost their lives at Parkland and every victim of gun violence:

Their stories might have ended, but their lives began and inspired a movement. We will never forget.

On Wednesday, February 12, it’s the National Day of Conversation with multi-city screenings happening across the nation timed to the shooting’s second anniversary. Over 75 theaters across the US are participating and head on over to afterparklandmovie.com for more information. On February 19, the film will be available on Hulu.