Home / Billy Beer's Barstool • Fanboying! • Q and A / Al Pacino Q And A! Billy Meets The Icon After Seeing His New Film The Humbling! Autographs! And More!

Say Hello to my little friend!

That’s one quote Billy hears all the time, and it’s said by a certain iconic celebrity. Yep, I’m talking about Al Pacino.

Al Pacino did a rare q and a for the film The Humbling and our own Billy Beer was on the scene!

Welcome back to Billy Beer’s Bar Stool!  Today we are off to see one of the greatest actors of any generation Mr. Tony Montana himself, Al Pacino!!!  He was doing a Q & A for the movie The Humbling.  I guess what tell me, it’s a lot like the movie Birdman.  I liked it.  I thought the acting was really good.  It was a dark comedy, blah blah blah.  Time for Fricken AL PACINO!!!!

I’ve only seen the guy once before on set, and that was crazy.  Today was a little more laid back due to the fact it was an AARP event that they sold tickets to the public.  I did bring canned food to help support their cause.

As soon as the movie ended, a number of people moved up to be closer for the Q & A.  Surprisingly, the theatre was not full.  Then they introduced Mr. Pacino.  The whole audience gave him a standing ovation! 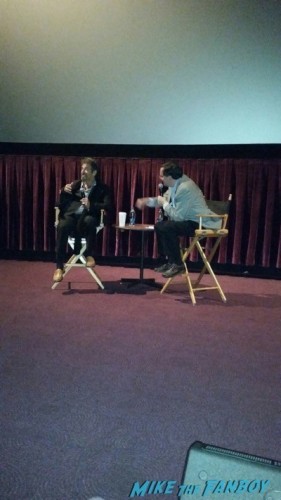 For the next 30 minutes he talked about his character, and the movie.  He talked a lot about plays and aging while your in the business.  Then they opened up for questions from the audience which basically consisted of people just going up and shaking his hand. 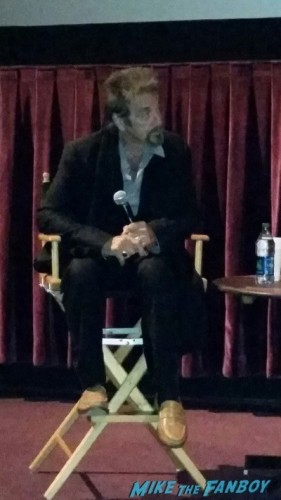 Then when all was said and done, the strangest thing happened, he didn’t get surrounded by security and whisked away.  He actually got up and came over to Ed sitting right next to me to shake his hand!!!!!  Can’t say I’ve ever seen that before.  Ed’s kind of a big deal!  🙂  Then all the pictures came out to sign.  He started off signing OK, I got about the 3rd one, and I can’t complain.  Anyone that has gotten Mr. Pacino before is aware that you are lucky if you even get a circle dot.

After I got my picture signed, I “tried” to get a photo with him which ended up becoming another photo fail. 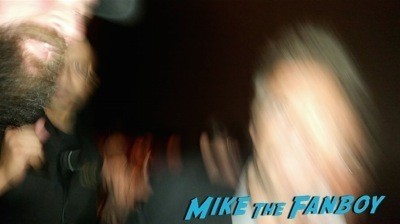 Then security rushed him off the stage.  I really can’t complain.  I got to listen to one of the best talk about his craft for a good 45 minutes.  It wasn’t too crazy, and everything ended in time for Happy Hour at Hooters!!!  What a way to end the night.  Till next time! 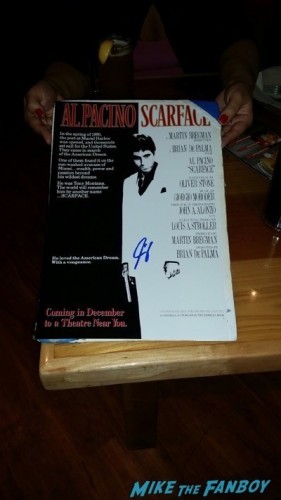