It’s so interesting to chart the rise of Bryan Cranston’s career. For years he was the patriarch on Malcolm in the Middle and then he shot to the stratosphere in Breaking Bad. Once that series ended, Bryan Cranston was nominated for an Oscar for his turn as Dalton Trumbo. You can’t really ask for a better career than that? Never one to shy away from historical roles, Bryan Cranston his Broadway for All the Way, the story of Lyndon Baines Johnson and he won a Tony in the process. HBO then turned All the Way into a tele-film and once again Bryan Cranston stepped into the lead role. 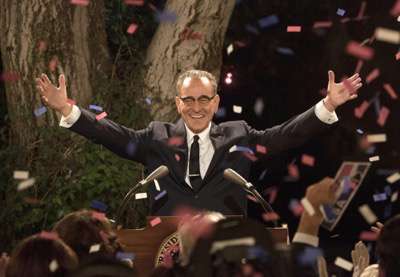 All the Way, out now on Blu-ray, is the signature acting piece from Bryan Cranston that you would expect and more. The film is a look at a couple notable events in Johnson’s (Bryan Cranston) presidency. The 1960s were a troubled time (echoed by our current… well… troubled times), race relations were at an all time high and civil rights were at the forefront of conversation.

We really see the relationship between Johnson and Dr. Martin Luther King (Anthony Mackie) really holding the film together. In the beginning the story really rests  on the assassination of President Kennedy and the aftermath of the tragedy. Here, in what is more or less a tip of the hat to Kennedy, Johnson tries to push the Civil Rights Bill through congress before the 1964 election. It of course does pass and we get to see the tumultuous time in getting it done.

It’s interesting that All The Way has come out in the same year as American Crime Story: The People vs. O.J. Simpson. Both pieces sort of suffer from the same issue, and that’s we all know the outcome of their stories. We know O.J. was acquitted, and we know the Civil Rights Bill was eventually passed. It’s hard to build suspense around something that the outcome has been known and discussed. 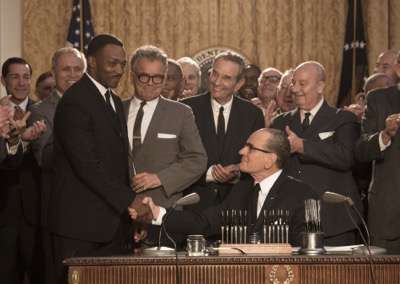 It’s to All the Way’s credit (and American Crime Story) for that matter, that it still makes the story compelling there are the character moments in the story like when we get to see the relationship between Johnson and Senator Richard Russell, Jr. (Frank Langella) which has a nice mentor/father-son feel to it. It’s in these moments that the film really gets fleshed out. Also, there were some nice moments that got explored, like the Democratic Convention that year not seating some black delegates and their fight.

The outcome of the election between Johnson and Goldwater has been studied and known for years (Spoiler alert: Johnson won in a landslide), again, I think in All the Way, knowing the history of the event does take away from the story, probably even more so than in American Crime Story to a slight degree, however the performance by Bryan Cranston is magnificent. He just tears up the screen and really brings Johnson to life. It’s a stunning transformation and won that might just nab Cranston another Emmy. 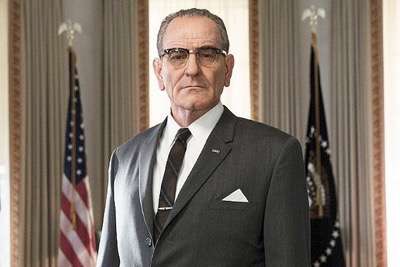 All the Way arrives on Blu-ray in a fine transfer thanks to HBO. The series itself isn’t an action heavy film so the high definition does take a back seat. However, the details are pristine and the colors right and vibrant. This really helps when the film gets into close up because you really see the emotions from the actors shine though. With performances like this, it’s important to really see the small nuances and this film allows that to happen.

Bryan Cranston: Becoming LBJ – This is a short look at how Bryan Cranston used the make up to get into character as Johnson.

All the Way: A Walk Through History – An EPK featurette basically talking about the actual history behind the film. 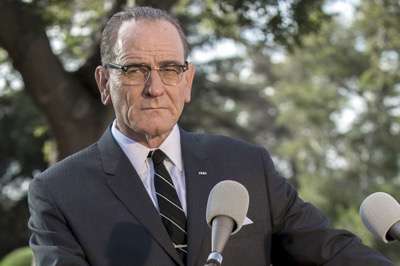 Overall, I really enjoyed seeing this film. Even with the eventuality that we all know the outcome, it’s a treat to see how the story unfolded. The Performances are outstanding and just for that it’s worth a look. Check this out before Emmy night on 9-18!