A bunch of the MTF crew headed out to the 2015 SAG Awards.

We were fortunate enough to get tickets from a mutual friend and it was chaos.

I’m going to have a full recap… or as full as I can remember… coming up soon.

But in the meantime, and with Billy’s permission I wanted to share a funny moment from the SAG bleachers.

Billy had the best spot of the day… It was Edie Falco… Or so he thought.

Billy whipped out his Nurse Jackie cast photo for Edie Falco. And Screamed and Screamed.

But when you’re flailing around and yelling Edie can sounds a lot like Amy… As is Amy Aquino one of the SAG board members and star of Brooklyn Bridge and Everybody Loves Raymond.

So, when Amy Aquino came over to sign for Billy, she said, “Oh, you are so sweet!”

Billy said, “I’ve been trying to get you to sign this photo for three years!” pointing to his Nurse Jackie photo (clearly Billy is a huge fan of the show). 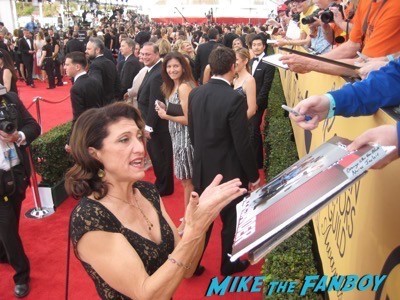 I didn’t realize what was happening until too late. I couldn’t stop Billy from doing a Fanboy Faux Paux. Doh!

Amy was so sweet though and played it off nicely.

All of us continued to make fun of Billy for the rest of night, and will continue to do so for months to come!

Stay tuned from more from the SAG Awards!