Home / Chuck Our Man In Texas • Fanboying! / And The Crowds Go Crazy In Texas For George Clooney! Chuck Fits The Mob To Get His Rolling Stone Magazine Autographed! Doh!

You know, I just don’t understand why people act insane when they see a celebity. I admit it’s a shocking thing the first time but for me when I get in awe or am stunned I don’t have the instinct to run into an SUV! LOL… Instead I usually get really quiet. I dunno, I get it, but man, if people could see their actions and the pushing… I dunno… I’m still smarting from the Magic Mike premiere can you tell lol?

Anyway, thankfully George Clooney has always been awesome and even though I’ve never had the pleasure of meeting him, I know how great he is with fans. Chuck Our Man In Texas, has a sort of maddening tale to tell of his experience meeting George.

Hey there, it’s Chuck from Texas. It’s been awhile but I wanted to share my last success that I had.

I found out that A lister super duper George Clooney was coming to my area, so I knew I had to try to get him to sign.

I got to the venue around 4pm, and waited. There were about 20 plus people waiting when George pulled up in a black SUV. He rolled down his window and said, Hi Folks! He then proceeded to try and open the door, so he could get out and sign for all of us.

This is where the story, makes me mad. You always have idiots who have never met a celeb, and they go crazy, and stupid. All the people rushed his SUV and crowded around his door, which prevented him from getting out. So he signed from the back, and about 13 of the 20 people got something signed. When I saw all the madness, I stuck my magazine up in the mix and he signed it with a beautiful….GCY!

His SUV then pulled into the garage and there was to be no more attempts.

I walked away with a signed magazine and another great story for my collection. 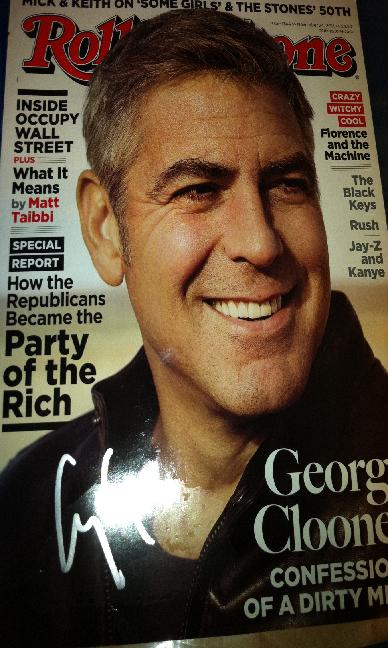