Can I tell you how much I love Nathan Fillion! I mean really! He’s such an awesome guy, and has been in like… three of my all time favorite television series… He of course was Captain Mal on Firefly (AWESOME!), was Caleb the evil preacher on Buffy The Vampire Slayer, and was Katherine Mayfair’s husband on Desperate Housewives before she went all lesbian and ran off with Julie Benz. If you think about it, Dana Delany really scored in the Buffy Verse cause she started out screwing Captain Mal and then got to run off with Darla… It’s every fan boy’s wet dream!

Anyway, CB knows none of these things, and I’m probably speaking Greek as far as he’s concerned. In fact if he was here, CB would probably try to throw in some random Paul Walker reference. Sigh….

Regardless, CB went out to try and meet the Castle star and if I wasn’t in KY with my family I would have been there as well. Check out his full report with the Serenity and Firefly star after the jump!

Dammit, I forgot to mention Waitress… Dude, awesome flick! Check it out! Lol…

Okay, back to CB’s report with photos by Anushika!

NANANANANA, CB, CB, CB! Today on another installment of cbthefanboy.com,

we have the awesome NATHAN FILLION! Nathan is the star of ABC’s Castle. Nathan plays Richard Castle on the show, and I’m a big fan of it, well, mainly because I love Stana Katic, who is OH SO NICE. Nathan was also on Firefly,

(Editor’s Note: ALSO ON FIREFLY! ARE YOU CRAZY! INSANE! AHAHAHAHAHHAAHAHAHAHAHAHAHAH That’s all. M-)

which I know nothing about, aside from the fact Christina Hendricks was on it. Nathan Fillion is doing a talk show appearance, and last time Pinky went for him and she said he was really nice. I want a photo with him mainly, autograph second. I have my photo to get signed, but no camera. Luckily the Awesome Anushika has a camera and provided all the photos. Lets go solve some crimes….Oooops, wrong entry…

5:00 I arrive and there are maybe ten people. Not to many people. A lot of FireFly fans and one of the other collectors has a FireFly toy.

6:15: Nathan arrives and he waves. He’s early, but I guess he is filming something inside. Guess we have to wait for the way out.

8:00: We see security move, and its Nathan. We don’t need to yell for him, he comes right over. 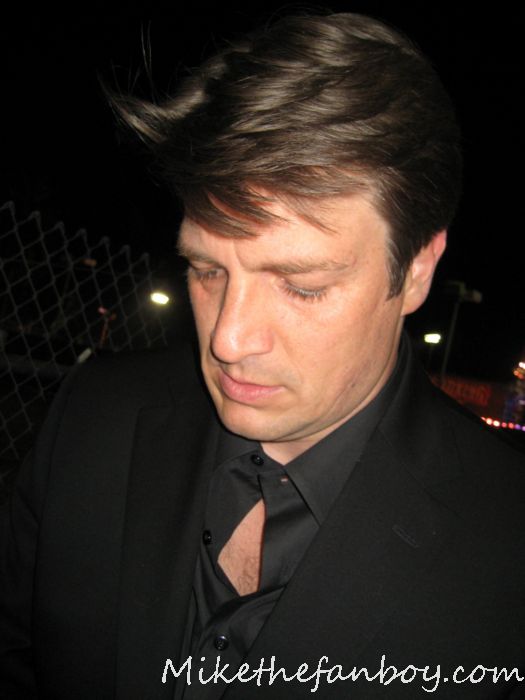 What an awesome guy. He signs and takes photos with everyone. I tell him I want the photo with him, he keeps saying I’ll do it, and I get the last one before he heads out.

GREAT NIGHT! He’s such a nice guy, just like Pinky said. If you haven’t checked out Castle on ABC, you’re missing out.

(Editor’s Note: As well as Firefly which is currently airing on Sci-Fi! Or is it SyFy? Whatever google it! M-)

Once again, big thanks to the AWESOME Anushika for providing the photos for the write up. Until next time, same CB hour, Same CB channel, same CB blog. KAPPPOOOOWWW! 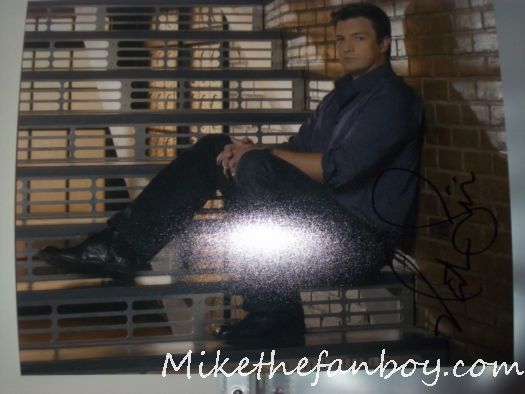