Home / Awesome Anushika • Fanboying! / Anushika Gets Lucky With Twilight Breaking Dawn Star Kristen Stewart! Me? I Get The Shaft! Doh!

Sigh… I’m so so happy for Anushika, however I have a slightly different perspective of this event from further down the barricade… Which, if I ever get 15 minutes to sit down and catch up on my life, you may hear about…

Anyway, Awesome Anushika is a huge Twilight fan, she has to be… She owns New Moon… On Blu Ray! LOL… And so, I’m always happy when she gets one of her favorites, in this case Kristen Stewart. I like Kristen a lot, and thought Adventureland was an amazing movie… I was at this event but didn’t have the pleasure of getting Kristen.. ah well… Grumble Grumble…

Check out Anushika’s take on things after the jump!

The madness begins…Yes! Twilight is back for round 4. Part-1 of Breaking Dawn will be premiering soon and the cast is out and about promoting the movie. I told myself that I’m going to stay away from it all, but the fan in me made it impossible. I was good about not going for characters I’ve already met. Earlier this year I suffered over 12 hours each just to meet Rob Pattinson and Taylor Lautner. I know, call me crazy! =D Doubt I would ever want to go through that insanity again. However, I really needed Kristen Stewart to complete my Twilight Trio; so when I heard that she’ll be appearing at a taping, I just had to check it out.

Thanks to work I knew I won’t be able get there early, but I was willing to try my luck. I managed to get back home around 11am from work. After catching a couple hours of sleep, I ran out!

2:30pm- I just arrived and was expecting a ridiculously big crowd, but to my pleasant surprise, the line wasn’t that bad. There were a lot of people, but not too crazy. I might actually have a chance. Yay! There’s hope. =)

2:35pm- I recognized most of the faces from other Twilight events. I guess the gang is here lol… The wait begins.

2:45pm- Some friendly faces arrived. It’s always Awesome to have great company when you have to kill so many hours.

3:00pm-I could barely see what’s going on up front since there’s way too many people in front of me. So I was relying on the people up front to keep us posted on what’s happening.

3:05pm-We noticed some movement. The security was getting ready to let someone in. No Way! It can’t be her, it’s way too early. Everyone started getting all nervous. We were anxiously waiting to see who was going to pop out through those gates.

3:10pm-Now there’s a big crowd at the door and I really can’t see anything. After a couple minutes, we heard that it wasn’t her. Some of the other guests are arriving, but no sign of Kristen yet.

5:00pm-The line keeps growing. Thankfully this time around security decided to put barricades all along the line instead of putting them across. Yay! I Love barricades! =) 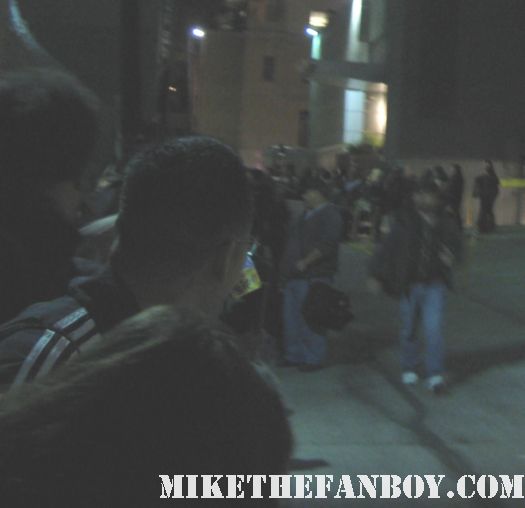 5:15pm-I get a glimpse of Mike and Pinky, but they are pretty far back in the line. Even though I had my spot secured, I was afraid to go back out there since I might not be able to come back up. Twilight fans are crazy and they do get violent lol…it’s the truth! =D I’ve seen it!

5:20pm-Still no sign of Kristen. It’s getting colder and colder. 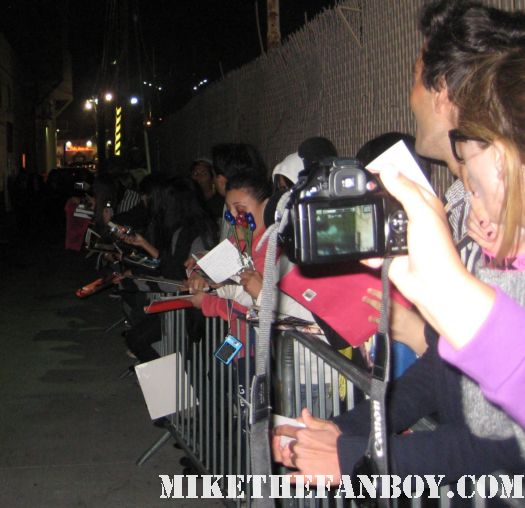 5:30pm-I’m really liking the fact that I’ve yet to go through a panic attack, since early this year I went through three by this time waiting for Robert. I wish every crazy event was a bit more organized like this.

5:40pm-We hear the people up front screaming. Yup! Kristen is in the building. I didn’t see a thing lol… Apparently she just waved and went right on in. It’s an early taping, so hopefully she’ll be out soon.

7:15pm-We hear that security is moving. She should be coming out soon. I started getting my stuff all ready. One of the securities actually came down the line and told us not to ask for pictures with Kristen. He said she’ll sign and will do pictures after if time permits. Now we all know what that means lol…Anyway, I’m SO Psyched that she is coming over! YAY!!!! =D 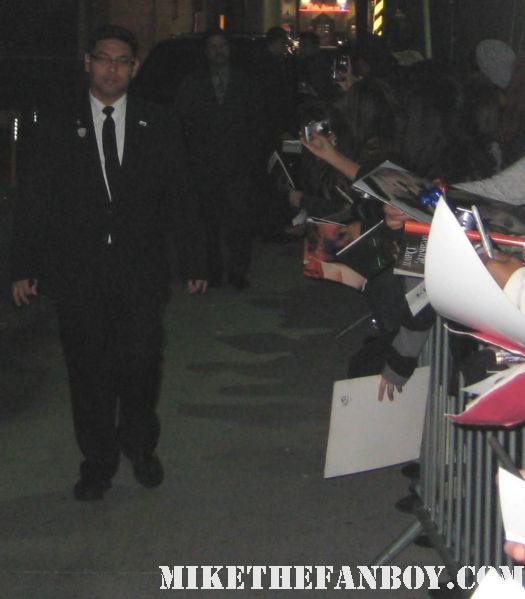 I could barely see her. She starts signing and she is actually taking her time talking to some of the fans. 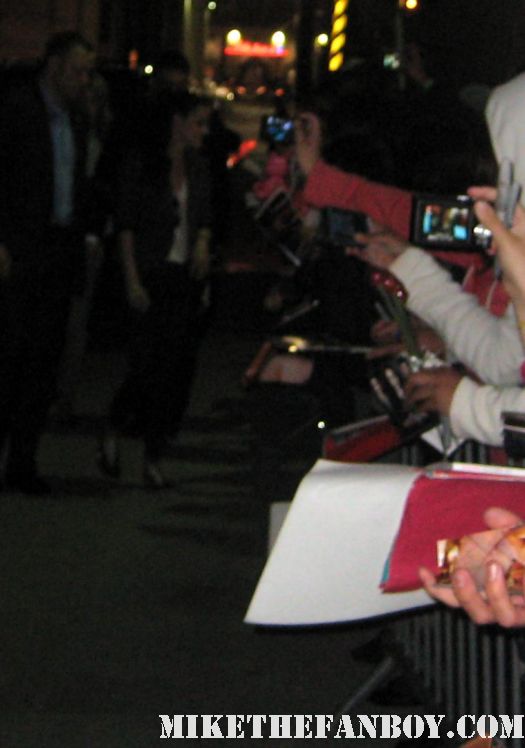 7:22pm-It’s really nice of her to take her time and talk to her fans, but it made me nervous since the line is SO FRIKIN LONG and you never know what will happen. She is still pretty far away from us. 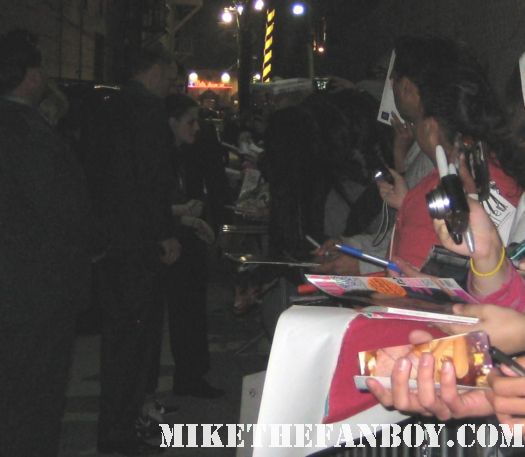 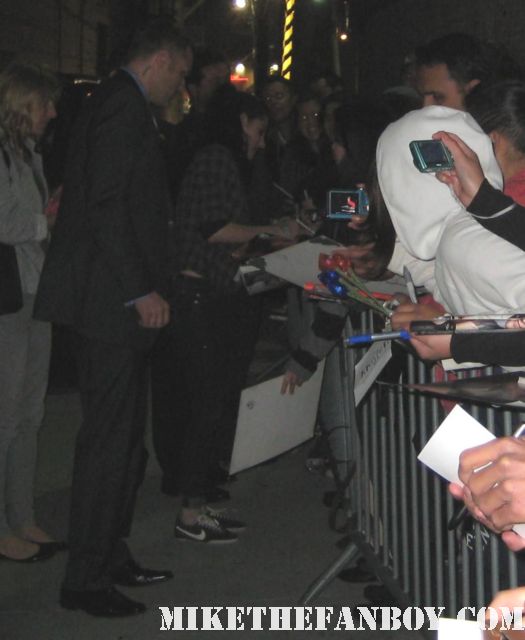 7:25pm-I see that she is being picky about what she is signing. She is getting closer and closer. I noticed that she was holding a black AND a silver marker. WOW! Now that’s a First! She had no problem switching back and forth. 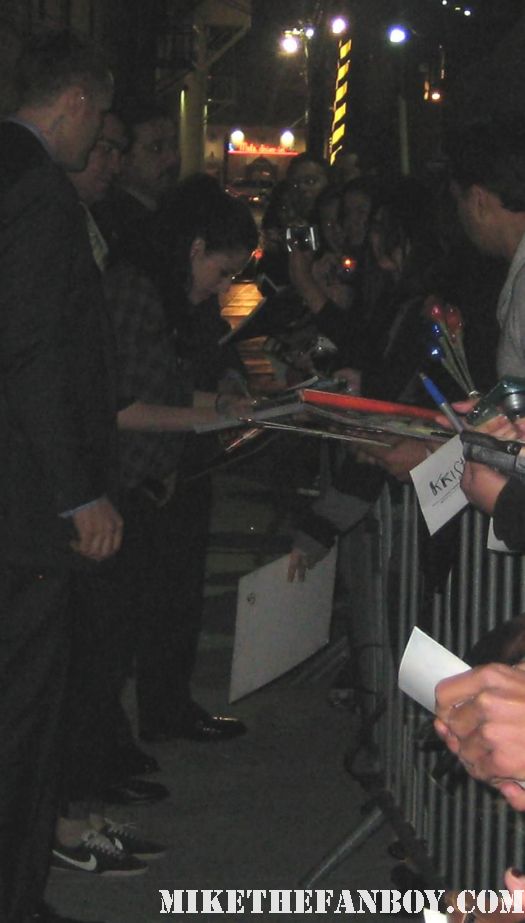 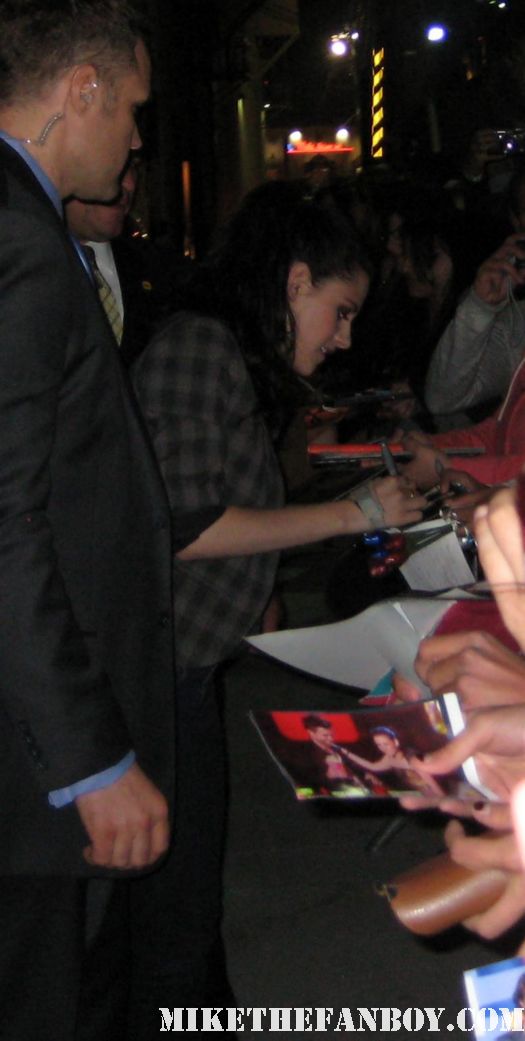 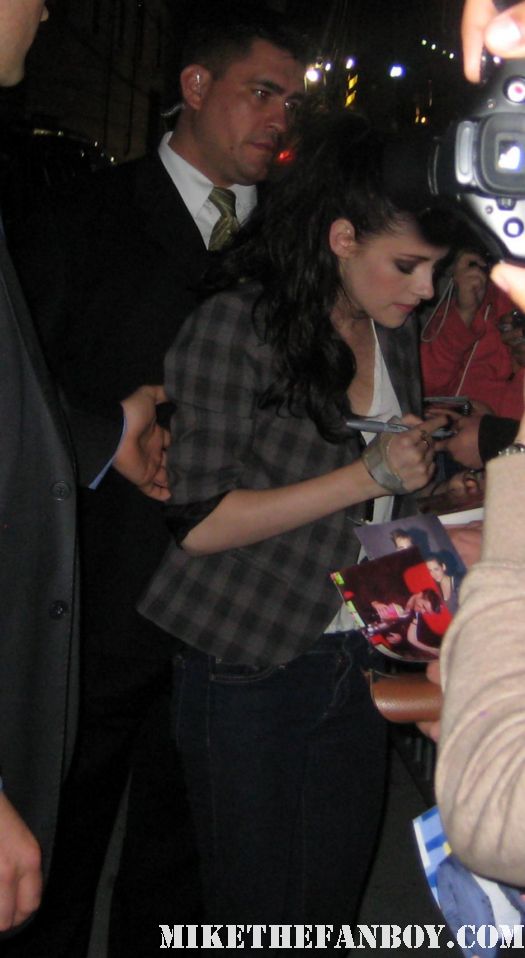 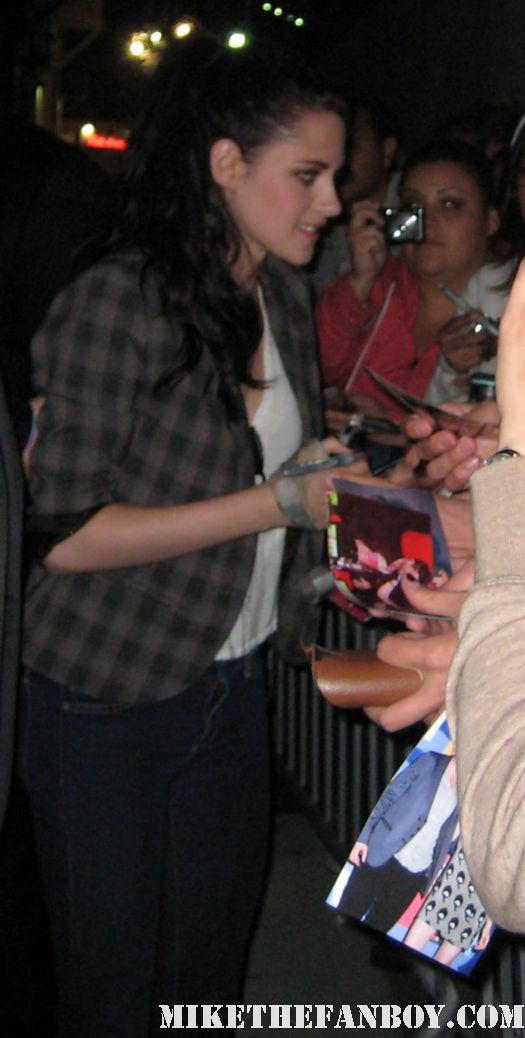 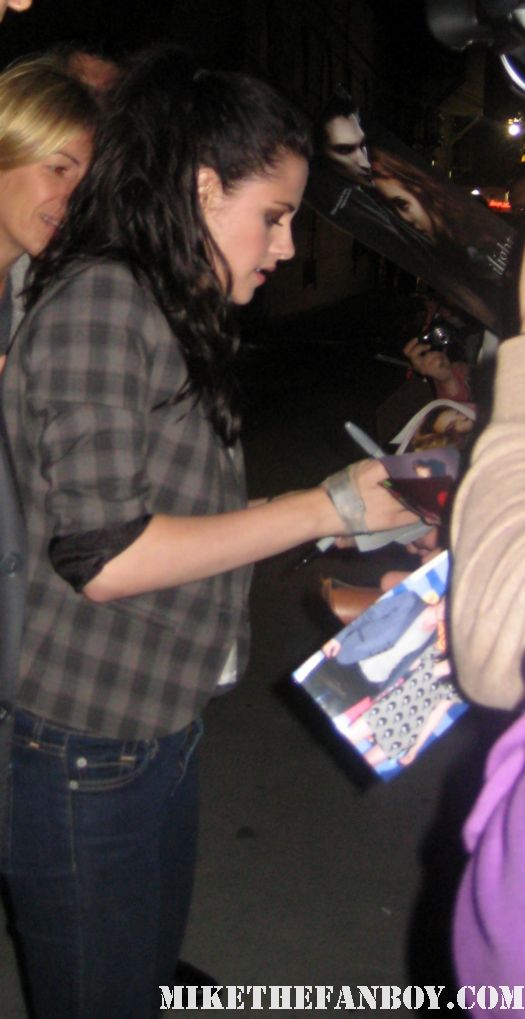 7:28pm-Me and my friends were quiet and waiting patiently for our turn, and as soon as we heard the publicist we sprang into action so fast the next few seconds were a complete blur….Yup! Panic Attack! 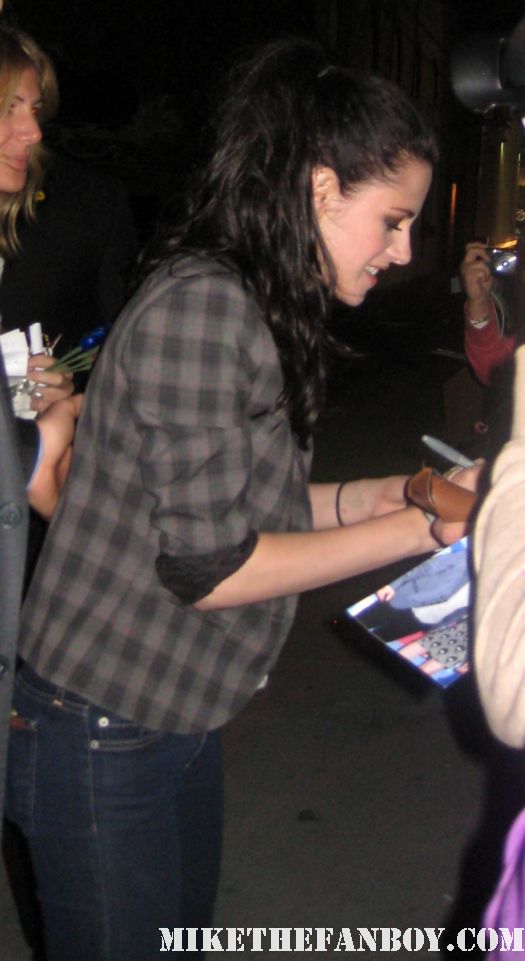 We all called out for her and pretty much begged like our life depended on it lol…I know, pretty pathetic! But I was NOT about to miss out on her after she got THAT close to us. We were like, “Please Kristen, just a few more please!!!” 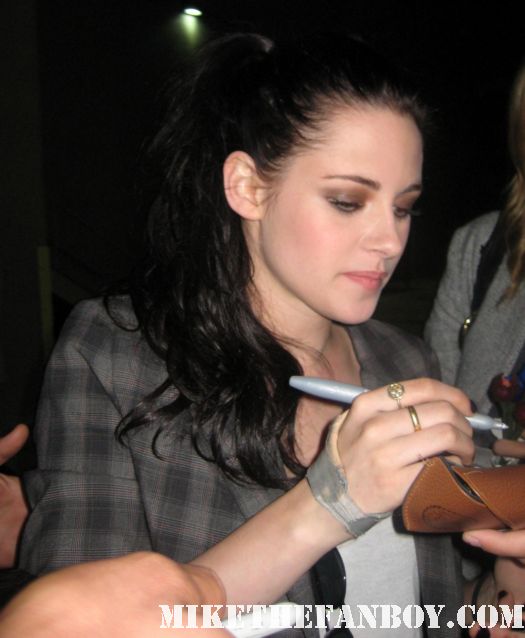 I asked her if she could please sign my DVD cover, and OMG!!!!! I GOT HER!!!!!!!!!! She refused to sign my friend’s picture at first, but after he said yet another “PLEASE Kristen!”, she changed her mind and signed for him lol….He was the LAST one to get her. 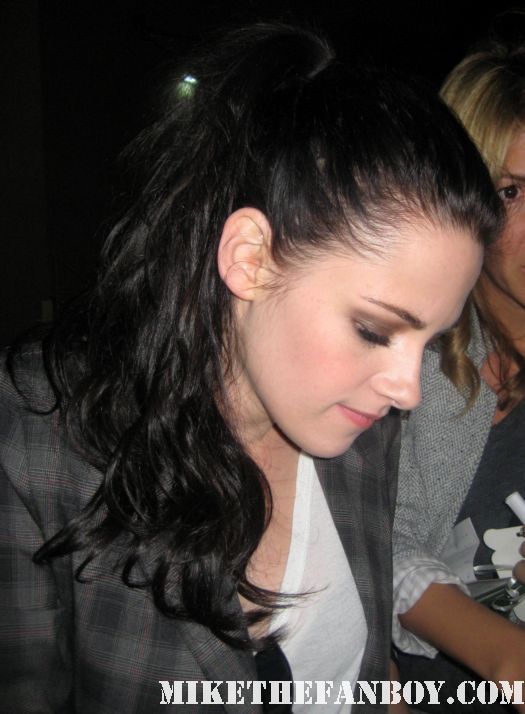 7:29pm-Her publicist thanked us and took her away. They all got into the car while the rest of the line kept chanting her name. She probably covered only one third of the barricade, so we were fortunate enough to be the last ones. 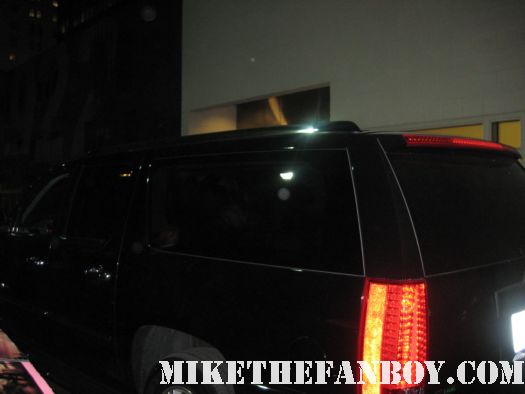 7:30pm-I was SO SO SO HAPPY!!!! =D Finally finished my Twilight Trio!!!! No crazy lady fights or security screwing with us, and had to go through only one panic attack to get it. I say, it was one of the BEST nights for me as far as dealing with Twilight madness. =)

I really feel bad for the rest of the fans behind us. Wish she did a bit more. You never know what to expect at these events. I’m really thankful that she came over to her fans and did take her time to sign and talk to them. After I got home and was going through my pictures, I realized her hand was wrapped up. That might have been why she didn’t go down the line. When crowds are that big, they could only do so much. Everyone is NOT Johnny Depp! 😉 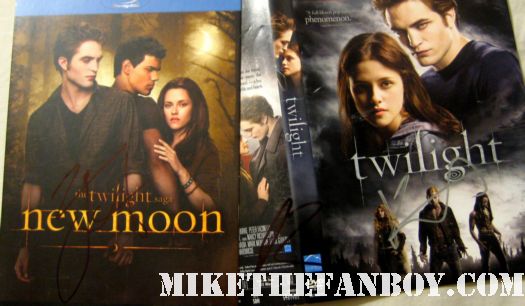