Wow, I love getting reports like this. I love Bones on FOX, it’s such a good show, and of course it stars Angel himself Mr. David Boreanaz. Good times… And you know there’s nothing like having a chance meeting with someone you really like and haven’t met before. I also love that. It can be frustrating when you have things at home to get signed or what not… BUT again a lot of times the experience is better than just an autograph!

Anushkia had a moment like this (and I didn’t mean to quote Kelly Clarkson) with Bones Star T.J. Thyne. She just ran into him after an event.

I know I attend a lot of Hollywood events, but there’s no joy like bumping into one of your favorite characters randomly on the streets. I was actually at the premiere for It’s Always Sunny in Philadelphia with our one and only CB. After the red carpet arrivals CB left and I decided to hang around to see if I could get some of the celebs we missed. I rarely stick around after, but tonight….tonight I just felt like staying! =)

I was just killing time with some of the other collectors and one of them started telling me a story. He pointed out a random couple walking out of the theater and told me to pretend that they are famous. I was like ok! He continues to tell me the story; and meanwhile my eyes were still on that couple. It was really dark outside and as they kept getting closer to the dim streetlights, I started seeing a silhouette of a curly haired guy. I wasn’t quite sure at the moment, but I was very intrigued by this figure coming towards us. He looked familiar.

As soon as his face hit the light, I saw his bright blue eyes. OMG!!!!! It was Dr. Jack Hodgins!!!!!! ^_^ Right in front of me!!!!! They crossed the street and continue to walk away from the theater. I FROZE!!!! ……aaaand then started FREAKING OUT!!! I screamed quietly at my friend saying HE IS FAMOUS!!!! =D lol… My friend had no idea who he was, so I started telling him about Bones and how he is one of the AWESOME Geeks I Love!!! He suggested we go after him. I could NOT remember Dr.Jack’s real name to save my LIFE! Lol… I started panicking since I didn’t feel comfortable approaching him without knowing his real name. However, my friend insisted that we go after him and before I knew it, we were both walking really fast to catch up with them….who am I kidding??? We were chasing them down Sunset Blvd lol… =D

I was still panicking since I had no idea what to say to Dr. Jack!!! They were clearly on a movie date and I really felt bad bugging and interrupting. My friend finally caught up with them and said something to him (Later found out that he asked if I could take a picture with him and T.J. was like Sure!) and Dr. Jack stopped and turned around with the biggest smile and said “Hey! What’s your name?” I just stopped dead on my tracks….a second goes by aaaand I TOTALLY started Geeking Out!!! I was So Happy to see the couple just smiling at us and enjoying my complete “Geek Out” lol… I apologized for disturbing them, but he was more than happy to take a moment…..I just Love when the people you adore act the way you always imagined them to be. 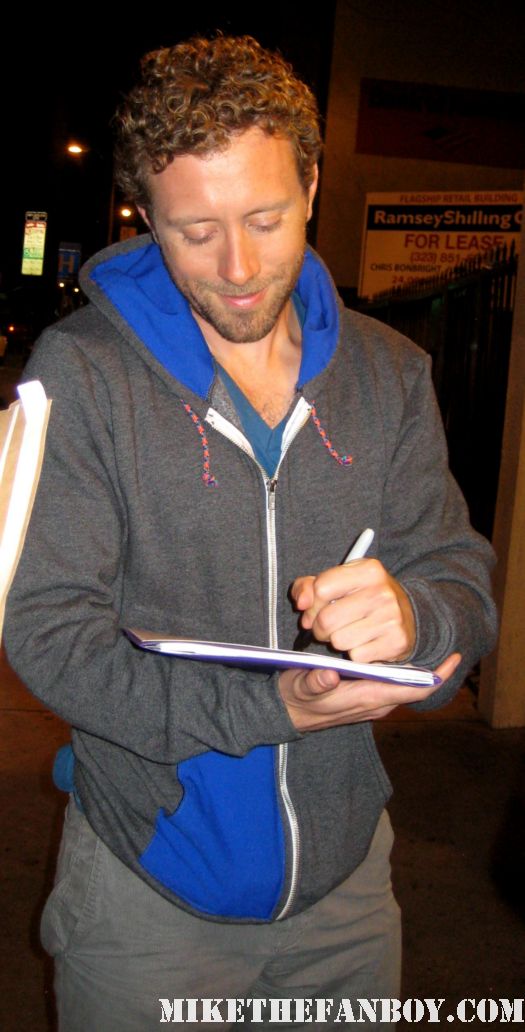 I was SO nervous and my voice was all shaky. He was all ready to pose for a pic. I barely managed to get a hold of my camera. My friend was quick and took it from me to take the pic. After the pic, I asked him if he didn’t mind autographing my book and I was struggling to get my stuff out lol….Again, my friend was quick to give T.J. a sharpie and that’s when he started writing which felt like a novel on my book at that moment! =D 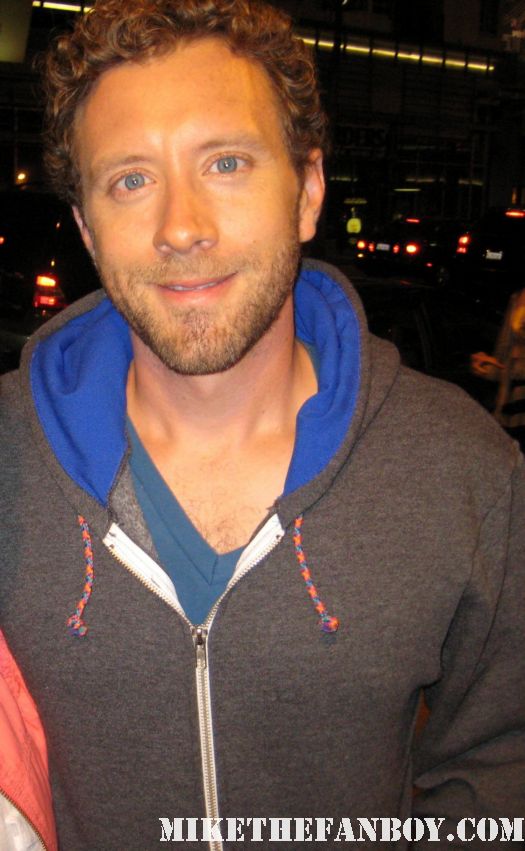 Never thought I would have a full on conversation with him. It was probably for a couple minutes, but felt like it lasted for half an hour. He Loved my name and asked its meaning and who gave it to me. He asked me where I’m from and if I like living in LA. Then I started telling him how much I LOVE the show and his character and thanked him for making Lab Geeks look cool. He laughed and asked me about my work and what I do as a Lab Tech….BEST part was when I told him I work with blood, he was like “So, you are like Dexter!” LOL…YES!!! =D YES I AM!!! Haha…

I didn’t notice at the moment, but we confused a lot of people back at the event when we started mad dashing down the street lol… A couple of the collectors followed us and T.J. was more than happy to take pics and write novels for them as well. He was a COMPLETE Sweetheart! ^_^ He couldn’t have been any nicer to his fans. I can’t THANK my friend enough for EVERYTHING!!! He TOTALLY made this ALL happen!!! <3 If you aren’t familiar with BONES, do yourself a favor and watch it! Season Premiere Nov.3rd 9/8c on FOX! =) Always Keep Your Eyes Out Peeps! 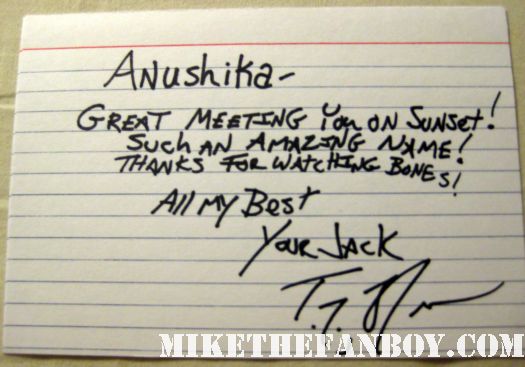