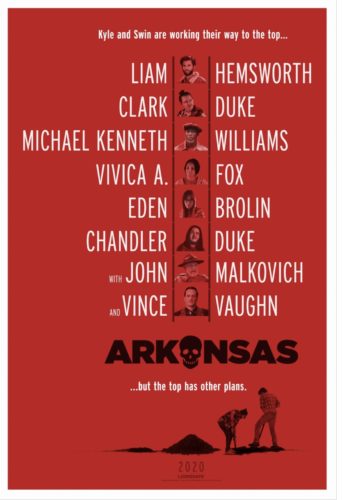 Don’t do it. Avoid “Arkansas” at all costs. Clark Duke’s directorial debut is an excruciating experience despite a compelling cast.

Deep in the South, the Dixie Mafia rules the land filled with despicable degenerates and drug dealers. Allegiances aren’t aligned in families like in the Cosa Nostra or drug cartels, but loose affiliations with scumbags and skeezy people trying to make a buck any which way they can. For the past three decades, Frog (Vince Vaughn), has built an empire out of Arkansas, but his world is about to change when two low-level employees Kyle (Liam Hemsworth) and Swin (Clark Duke), whom he has never met, make a series of mistakes. 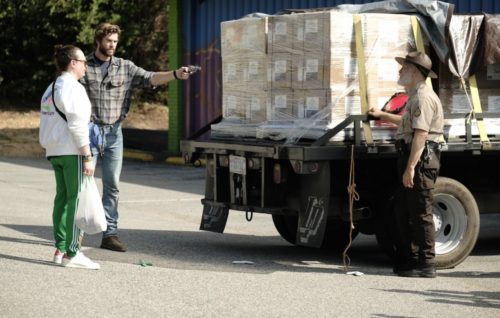 Over the past few years we’ve had some intriguing directorial debuts from actors, but sadly Clark Duke doesn’t hit the target. Being a producer, co-writer, co-star and director derailed Duke with him having too much on his plate. “Arkansas” absolutely misses the mark and leaves you with more questions than answers about the storyline/structure. This crime drama/thriller has its moments, but the unevenness seems like a series of vignettes maligned by poor storytelling broken down by chapters, questionable flashbacks and dubious casting choices starting with its director in a prominent role.

Liam Hemsworth fits fantastically as the lead Luke, fully immersing himself into the mindset of the character. Truthfully, I wish he was provided more opportunities and if this were the 1970s, Hemsworth would wonderfully fit in the classic exploitation, southern Gothic and niche dramas of yesteryear with this characterization. The same can be said about Vince Vaughn, who has slowly reinvented himself as a conniving, convincing character actor. Truth be told, when he’s onscreen, Vaughn takes over the film and dominates the storyline both figuratively and literally with his character. The film focuses on weaving two parallel narratives together before forming fully, but the biggest hinderance is the tone of the stories and characters, which leads me back to Clarke Duke. 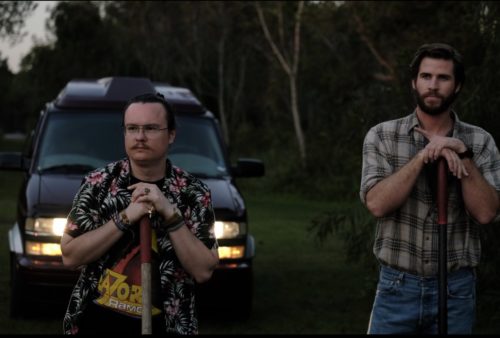 Filmmakers Mike Binder and Jon Favreau are probably the closest with what Duke was trying to accomplish as writer, co-star, producer and director. However, both Binder and Favreau have learned they’re better behind the camera with their talents fully realized. Unlike, Joel Edgerton (“Boy Erased” and “The Gift”), the late Terry Jones (the “Monty Python’s The Life of Brian” & “Monty Python’s The Meaning of Life” and co-directed “Monty Python and The Holy Grail”) and
George Clooney (“Confessions of a Dangerous Mind,” “Good Night, and Good Luck,” and “The Ides of March”) who balance directing and acting in supporting roles, Duke’s decision to play one of the larger parts immensely interrupts the flow. It’s as though Duke took his “Hot Tub Time Machine” character, made him a hipster with a trashy Floridian vibe (despite the character being from Kentucky), dresses him in vibrant colored clothes (eerily similar to standing out in Coachella/Silver Lake/Miami) and has him “rock” a manbun. Immediately from the get go, he’s a disastrous douchey character both by looks and mannerisms, who is a smarmy smartass. Duke doesn’t fit in at all, but he’s not the only one. 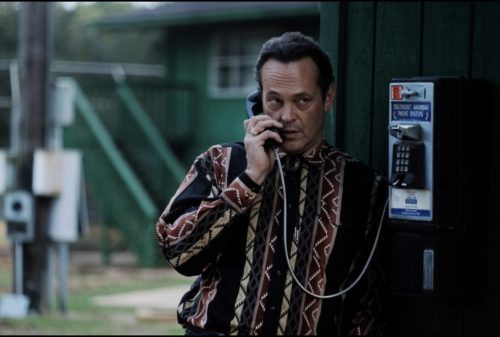 Despite a cool cast with Liam Hemsworth, John Malkovich, Vince Vaughn, Vivica A. Fox, Michael Kenneth Williams, Eden Brolin, Brad William Henke and Jeff Chase, the mismanaged movie fumbles forming no likeable characters you can fully appreciate. Vaughn and Malkovich certainly capture your attention playing interesting characters, but beyond that the majority of the time you’re struggling for some sort of connection and someone to root for the entire time. There are glimmers of hope like when Frog is officially introduced or the Twins (Brad William Henke and Jeff Chase), but it’s a tease. I rather see those complete storylines shown instead. The filmmakers forced a Quentin Tarantino and Elmore Leonard-like storyline trying to intertwine interesting narratives together, but failed to recognize the unevenness. 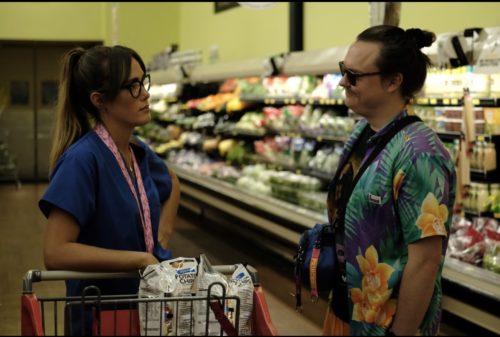 “Arkansas” had the potential to be a fun film reminiscent of the 1970s and 1990s crime-drama thrillers, but beyond conceptually couldn’t capture the necessary balance of intrigue and sustainable interest. For the first time in a long time I found myself saying aloud, “When is this going to get interesting,” “How much longer is this going to be” and to quote my dad’s all-time favorite sight gag (from “Freddy Got Fingered”), “WHEN THE F*** IS THIS MOVIE GOING TO END?” Throughout the entire film, characters are briefly introduced as though to move plot devices without anything substantial beyond moving the scene along and quickly disappear. Sadly, this reoccurring madness is one of the rare consistencies in the film. There were glimmers of hope, but “Arkansas” might have been better done as a buddy movie with aspects of crime, comedy and drama like “Midnight Run,” “48 Hours” and “Stakeout.” In the end it’s a jumbled mess, but contains a stellar soundtrack by Devendra Banhart with a cool cameo from Flaming Lips singer Wayne Coyne. Arkansas might be one of the last natural states around with the Ozarks running through it, but the film “Arkansas” is an excruciating experience for two hours. This is one film you want to swerve and avoid unless you need to kill two hours. The state motto for Arkansas is “Regnat Populus,” which is Latin for “the people rule.” However, Clark Duke should embrace this Latin phrase and remember “Qui totum vult totum perdit,” which translates to “He who wants everything loses everything.” Next time, just stick to behind the screen or acting, not both.

Available on DVD, Blu-ray and streaming starting May 5, 2020.