Some events are awesome! They are low key and simple. You have to love that you know. Suddenly Susan had an encounter with the Lone Ranger himself Mr. Armie Hammer.

Susan headed out to meet the mirror mirror star at a recent talk show appearance here in los Angeles and low and behold, not only did Armie Hammer promise to sign he kept his word… And… People didn’t act crazy!

I had one of the most pleasant celebrity experiences recently. Armie Hammer was doing a talk show appearance and I am lucky enough to work extremely close to the venue. I took a late lunch break and headed over. The problem was, if he didn’t sign on the way in, I’d have to head back to work and that would be that.

I was first to arrive, followed by eight other people. Not too bad and last time Armie signed on the way inside, so my hopes were high. A town car arrived, and while we were all straining our eyes to see who was getting out, one eagle eyed observed screamed Armie!! He had just passed us all, riding in on a Vespa. Armie turned to us, swerved and nearly crashed his ride. He flipped his helmet and told us, “I’m late! I’ll do it on the way out, I promise!” Well, that sounded great, but I had to leave. So I headed back to work broken hearted with my unsigned Lone Ranger print in tow.

I realized, however, I had only taken 30 of my 60 minute break, so why not asked the boss if I could take the second half a little later? I asked and he agreed. My boss rocks!
Back at the taping, there were about 17 people now waiting. This was pretty low key, considering the chaos that Henry Cavill and Russell Crowe had generated just a week ago. The audience let out and our group was smart enough to stand away from them as they walked out so no one would piece together for who and what we were waiting. The entire audience had cleared, so we crossed to the exit side. I suggested we line up in an orderly fashion behind the metal railing. A few people agreed and we started to do so, but the majority of the bunch stood in a mass at the end of the driveway. Sigh. Unless we all do it, there’s no point.

A security guard then came over and told us that Armie was on his way out and that he wanted to stop for us, but could we please line up behind the railing. Hmmm, what a great idea! He reminded us that Armie was on a scooter and he didn’t want us to crowd him. On a side note, here’s a shout out to that security guard, as he was extremely nice. We always seem to note the nasty ones, so turnabout’s fair play.

Now, to Mike’s recent post regarding etiquette and autograph collecting, here’s a perfect example. Armie has promised to sign. Security has told us he’s on his way out to sign as long as we line up. And still people rushed and shoved to get to the front. Seriously? And to be fair, it was a mix of fans and dealers. There aren’t even 20 people here. Did they think he was going to sign for only the first 5 people and then leave? This hobby boggles the mind some times.

True to his word, Armie came over and started down the line. This guy is a class act. 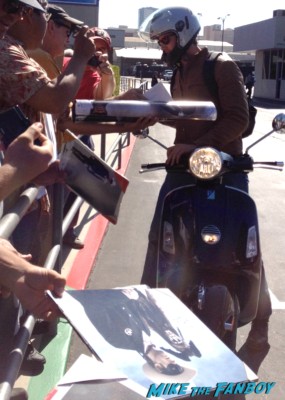 So engaging and fun! I’ve seen celebrities sign down the line for 30 or 40 people without a word, and I’m not complaining because they’re nice enough to do it. But when they actually make eye contact, ask questions, start a conversation with you, well then I’ll say I’ve actually “met” the person.

Armie gets to me and sees the awesome 12×18 I had printed and said, “Whoa, that is glossy! Where’d you print this?” I told him and he proceeded to sign. 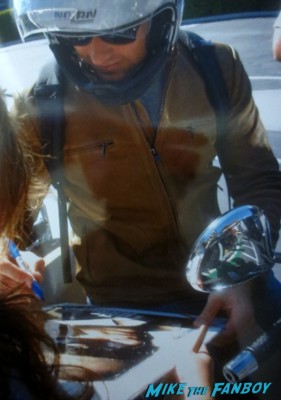 I asked him to make it out to Susan and he asked if it’s the typical spelling. Just as I said it is, he said, “Oh shoot. I started to make this to Suzanne. Wait, I know,” and put a big ‘S’ in the middle of my name and said, “fixed!” The autograph is awesome, even though it looks dark in the photo, you can totally see the ginormous signature after ‘Susan, you’re the best’. It’s true; I am. (humble smile). Then I ask him to sign the Lone Ranger one sheet for my boss who let me out of work to come over. Armie personalized it and then wrote, ‘you’re a good boss’ underneath. He told me, “I hope that gets you some brownie points”. It sure did!!! 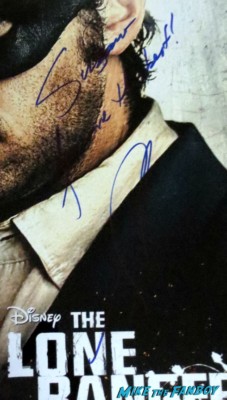 I waited until he was done signing to ask for a photo. I wanted to make sure everyone got what they wanted and didn’t want to take up too much of Armie’s time. He graciously posed and told me to use it as proof for my boss. One of my fellow autograph hobbyists took the photo for me and vice versa. 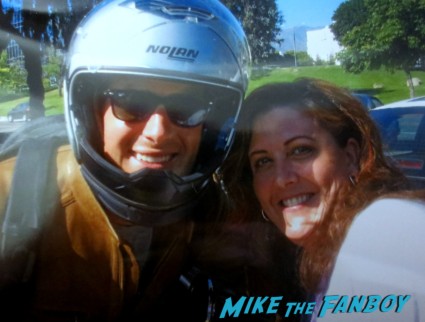 Armie is one cool dude and a total sweetheart. This is the perfect example of how a celebrity encounter can influence the box office. I had no intention of seeing The Lone Ranger, but after meeting Armie, I’ll be there opening night for sure! 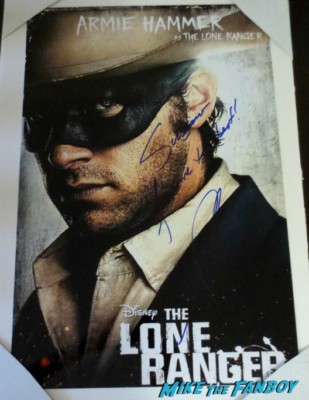