This is awesome! 20th Century Fox is giving fans the opportunity to create the cover art for Arrested Development season 4 when it comes out on DVD!

I love seeing the amazing fan art that people create. It’s awesome to see how many talented people are out there!

Head here to check out the page and take a look at all the info below!

LOS ANGELES, CA (September 2, 2014) – “Hey, brother.” Twentieth Century Fox Home Entertainment has teamed up with series creator Mitch Hurwitz to find the ultimate “Arrested Development” fan to create the cover art for the Season Four DVD Boxed Set! To enter the contest and see all the rules, go to the official “Arrested Development” Fan Art Tumblr page at ArrestedFanArt.com. Simply follow the instructions to upload your original artwork to the Tumblr page and you will see your artwork become part of the online gallery of entries into the contest. Mitch Hurwitz will select one lucky winner to have his or her artwork become the cover of the Season Four DVD and receive a $1,000 prize. All entries must be received by September 16, and just remember, even if you don’t win there’s always money in the banana stand!

Welcome to Season Four of the Emmy®-winning series* about the ethically questionable but unquestionably hilarious Bluth family. This season, when Michael asks Gob to help fill the vacant Sudden Valley housing development, the isolated location becomes a selling point to sex offenders, including…Tobias?

After Buster’s testimony helps land Lucille in “prison,” her solution to hostile inmates is to build a great wall on the U.S.-Mexico border, where Oscar and George Sr. have a scam going. Lindsay seeks spirituality, Maeby likes high school too much and George-Michael has a very unlikely rival in “Arrested Development’s” funniest season yet! 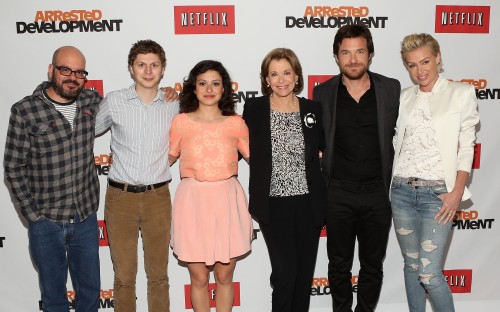