Ash vs Evil Dead is one of the smartest and more refreshing series to come out in quite some time.

Now the first season is about to be released and I’m so excited! 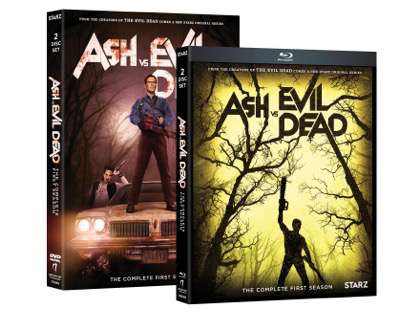 From the creators of The Evil Dead comes a new STARZ Original Series, Ash vs Evil Dead. The STARZ Original series is the long-awaited follow-up to the classic horror film The Evil Dead.  The series is executive produced by Sam Raimi (The Evil Dead, The Grudge), Rob Tapert (The Evil Dead, The Grudge), and Bruce Campbell (“Burn Notice,” Oz the Great and Powerful, The Evil Dead, Evil Dead II, Army of Darkness), the original filmmakers, and Craig DiGregorio who serves as executive producer and showrunner. Campbell reprises his role as Ash, the stock boy, aging lothario and chainsaw-handed monster hunter who has spent the last 30 years avoiding responsibility, maturity and the terrors of the Evil Dead. When a Deadite plague threatens to destroy all of mankind, Ash is finally forced to face his demons – personal and literal. Destiny, it turns out, has no plans to release the unlikely hero from its “Evil” grip. Bring the terror home on Blu-ray™ and DVD August 23, 2016.