And while the fails are plentiful, it’s Nov. so there is a lot to be thankful for. Sadly, Ms. Aubrey Plaza… Not one of them. Doh!

Suddenly Susan headed out to meet the Parks and Rec star and sadly… It was a big old fail!
Doh!

The same night I ventured to meet Christoph Waltz, Aubrey Plaza was also appearing. Now, y’all know how much I love Chris Pratt, but I’ve been a big fan of Parks & Rec for years. It’s the funniest show on television in my opinion, so I couldn’t pass up a chance to meet April Ludgate herself.

Aubrey arrived before I did, but apparently, while just a handful of people had gathered by that time, Aubrey snuck right in wearing sweats and a hat and no one noticed her!

I brought a really cool fan made poster with Bert Macklin and Janet Snakehole – if you watch P&R you’ll get the reference. They are the alter egos of Chris Pratt and Aubrey’s characters on the show. It’s a unique item and I love getting things like that signed.

Once Christoph had kindly signed for us, the crowd immediately dropped down from 40 to about 20 people. The people on the fence had cleared and I was feeling hopeful.

We waited another 25 minutes when Aubrey emerged. She looked great in a flowery dress and had a big smile on her face. We yelled and she smiled. Some folks screamed about the cold and how long they had been waiting. Aubrey shrugged, still with a big smile, as if to say, sorry, nothing I can do about it.

And that was that. I’ve heard mixed things about her, but I’m not going to bash her here. Maybe she had somewhere to be, or just doesn’t like crowds.

Hopefully, I’ll get another chance to have this awesome poster signed. It’ll give me an excuse to get Chris Pratt again as well! 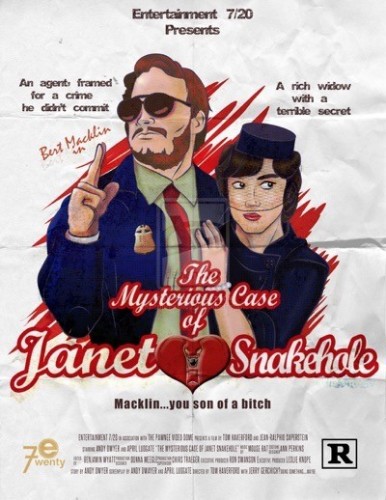