James just dropped this awesome report from the other side of the pond! James had the good fortune of attending the BAFTA’s and met a ton of awesome people.

Check out his full report after the jump and take a look at James blog which rocks!

This year, rather that miss the TV BAFTAs thanks to an Olympics Opening Ceremony rehearsal (I was in the cast, did I mention that?), I was attending the awards as a double BAFTA nominee thanks to that Ceremony (well, sort of). Cue the chance to dress up posh for an evening and sit in the same room as a whole host of stars of the small screen. Alas, the weather was not good this year. In fact, it did nothing but rain; when you want to get things signed, let alone when you’re wearing a tux, trust me it’s not easy. So, with a couple of exceptions, I stuck to just getting some photos instead. Met a few friends for a catch up before heading to the red carpet. Didn’t have too long to wait for arrivals, which was nice (the joys of having a ticket). 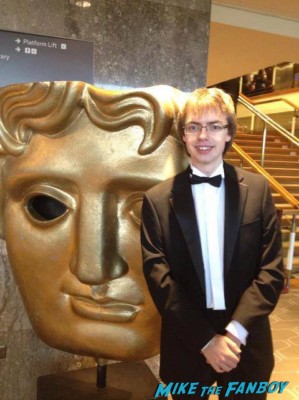 Jessica Hynes, known for Spaced, Doctor Who, but who I thought was awesome in the fab Twenty Twelve, was next to come over. She kindly signed my two Twenty Twelve DVDs which thankfully didn’t get too wet, and posed for a photo with me. 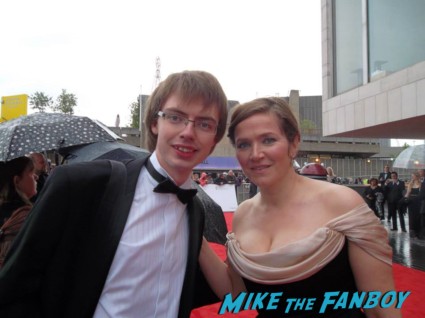 Comedian Nina Conti followed and posed for a photo. Maxine Peake, star ofDinnerladies, Shameless and Silk arrived shortly after, and signed an index card for me, although it got slightly rain damaged. I do like Maxine though, so was happy to meet her. Chefs and presenters of the awesome The Great British Bake Off Mary Berry and Paul Hollywood came over next; I got a card signed by Mary and a photo with her, and a card signed by Paul too. GBBO is one of my guilty TV pleasures so I was secretly happy to meet Mary & Paul.
The representatives of Emmerdale then arrived; John Middleton, who plays Ashley, Freddie Jones (Sandy), Mark Charnock (Marlon) and Charlotte Bellamy(Laurel). All four posed for photos with me. Whilst I’d met John, Mark and Charlotte before, Freddie was a new one for me, so I was pleased. 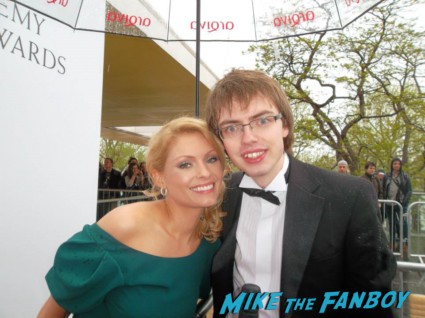 Next to arrive was a rather pleasant surprise as he wasn’t announced on the guestlist, Sean Bean!! I don’t think I need to give him an introduction somehow! He kindly signed an index card for me, and posed for a photo! It’s not come out amazingly, but I certainly can’t complain as it was awesome just to get an autograph from him. 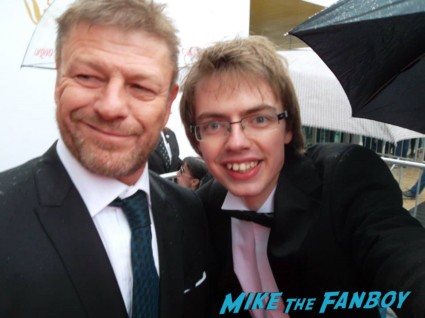 Next was one of the 3 people I really wanted to meet; Toby Jones. Whilst his credit list is pretty long, he’s been one big gap in my Harry Potter collection for quite some time, so I was very happy to finally meet him. He signed and dedicated an index card for me, and posed for a photo. Inset a happy James here. I mean come on, it’s Dobby!! 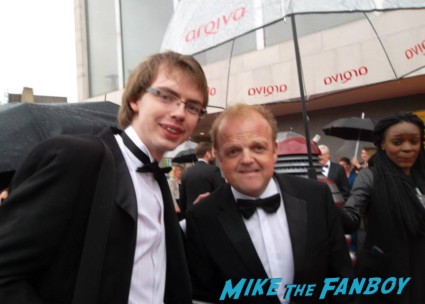 TV presenter Paul O’Grady came over next and posed for a photo, and Homelandstar David Harewood signed an index card (although I best know David for his role as Joshua Naismith in David Tennant’s final episodes of Dr Who). I’d have liked a photo with David, but he was just too quick. His Homeland co-star Damian Lewis was with him, but having met him a couple of weeks ago I didn’t get him again.

Comedian and star of the Inbetweeners, Greg Davies posed for a photo with me, as did Eastenders actress and Strictly Come Dancing star Kara Tointon. It’s not a great photo, but I’ve met her before so I’m not too worried. 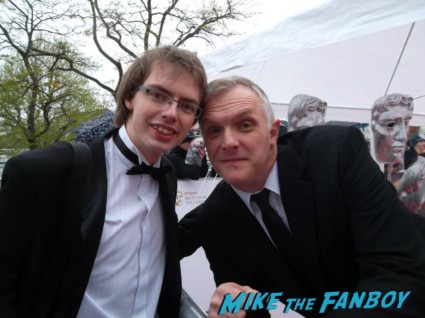 Next was another pretty big name, the rather awesome Sienna Miller! Again, I don’t think she needs an introduction. I met Sienna a couple of years ago when she did theatre at the Theatre Royal Haymarket, but she wouldn’t pose for a photo, so I wasn’t hopeful this time, especially in the rain. However, she more than happily agreed to one when I asked, and it’s come out really rather well! 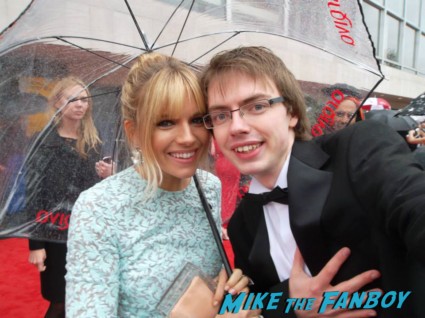 Comedienne and star of Call the Midwife Miranda Hart shortly followed, and also posed for a photo with me. She too has refused me a photo in the past, 3 times actually, so I guess it was fourth time lucky. 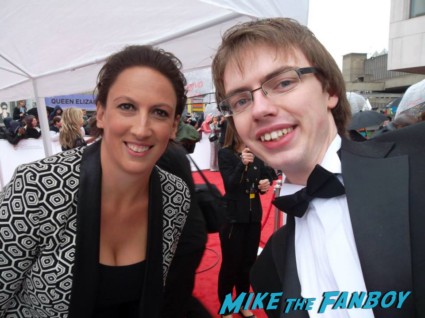 Miranda was followed by the second person of three I really wanted to meet, the brilliant Jenna Louise Coleman, who plays Clara, the Doctor’s new assistant in Doctor Who, and has previously been in Emmerdale and Waterloo Road. When it was announced there would be a special montage shown during the ceremony to celebrateDoctor Who‘s 50th birthday, and Jenna would be presenting an award to coincide with it, I thought it rather apt to wear my TARDIS cuff links with my tux, and made a point of showing them to Jenna who seemed rather impressed by them! She kindly posed for a photo with me and stood talking for a while. Happy James, the rest of the evening didn’t matter now! My friend somehow managed to get 29 (!!) photos of this. Very happy! 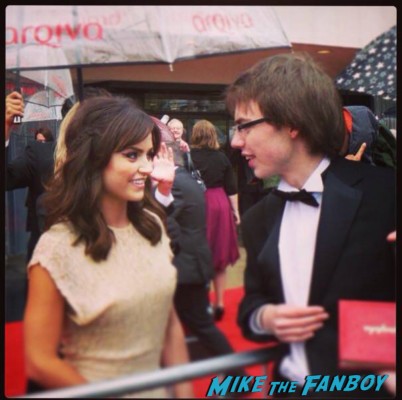 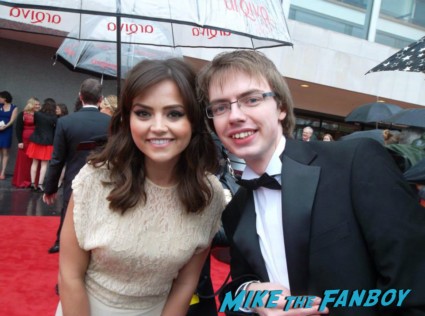 Jenna was followed by some of the stars of Call the Midwife; Cliff Parisi, Helen George and Jenny Agutter (who is best known for The Railway Children). All 3 posed for a photo with me, something Jenny has refused me in the past.

They were followed by the stars of Episodes, Tamsin Greig, Stephen Mangan and Matt LeBlanc! Joey from FRIENDS!! Stephen and Tamsin came over to sign, but I had met them before so didn’t get them again, and Matt didn’t come over to sign where I was. But as no overly big Friends fan I’m not too worried; I’d have been more fussed if it’d been David Schwimmer (for Run Fatboy Run) or Jennifer Aniston (for Bruce Almighty). The two presenters of the Great British Bake Off, Mel Giedroyc and Sue Perkins arrived next and posed for a photo with me.

Next was the turn of some of the stars of Coronation Street, one of my favourite TV programmes (an unusual choice I know!). I got a photo with Natalie Gumede (Kirsty), Paula Lane (Kylie), Alan Halsall (Tyrone) and Jennie McAlpine (Fiz). At this point Imelda Staunton and Jim Carter arrived together, but as with Damian Lewis since Id met them a couple of weeks ago I didn’t get them again. 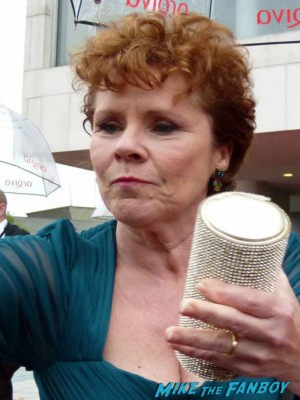 Professor Brian Cox arrived and posed for a photo with me, as did the star ofSpooks, Nicola Walker. Winner of the BAFTA Fellowship, Monty Python star Michael Palin arrived next, and kindly signed and dedicated an index card for me. He was the third and final person I really wanted to meet; as the head of the Royal Geographical Society I was happy to tell him I’m a member and studying geography at university; he asked what year I am in and wished me luck with my final year exams. Insert even happier James!! 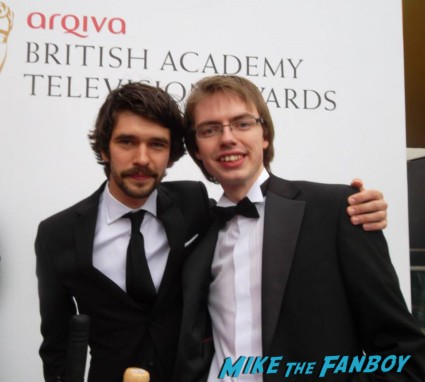 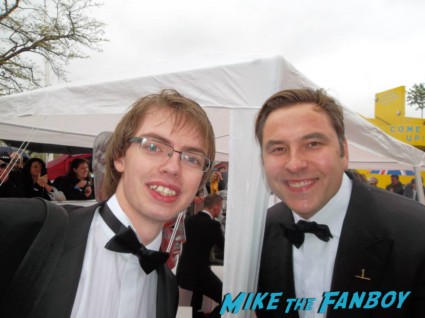 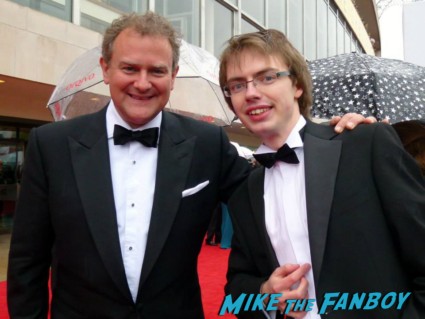 Presenter of pretty much everything during the Olympics, Clare Balding, arrived next and posed for a photo and signed an index card for me. The stars of Hunderby, Julia Davis and Julian Barratt also posed for a joint photo with me. Gwendoline Christie and Charles Dance, stars of Game of Thrones, followed shortly after, and both posed for a photo. Gwendoline is HUGE! I also got a photo with Eastendersactress Sam Womack (Ronnie) and Coronation Street actress Michelle Collins (Stella), although Michelle is directly thanks to my friend who works as Corrie’s head PA, so she knew to bring Michelle straight over to me. 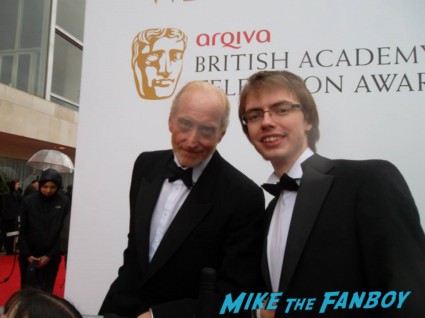 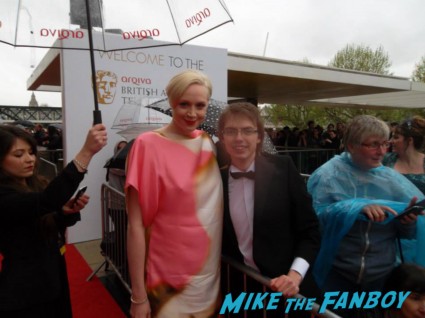 The final person I met before having to get in for the ceremony was presenter Holly Willoughby, who posed for a photo with me. Along the red carpet I walked past Matt LeBlanc, but protocol says not to get autographs once on the carpet sadly. Martin Freeman, Olivia Coleman and Ant & Dec arrived late so I missed them, but have met them all before a couple of times.

So that was the red carpet! A wet, but pretty awesome evening. I met the 3 people I wanted to, and plenty more. Plus got to attend the actual Ceremony, even if the Opening Ceremony didn’t win either of it’s awards. Ah well, it’s the taking part that counts!