When I saw the cover for Bait or for purists Bait 3D, I said… I have to see this movie. I admit full well, that Bait will be in contention for the Academy Awards. And I can tell you this because the cover art features a mad killer shark in a grocery store and that… That my friends is all awesome. Sharks can apparently go anywhere, including to Ralph’s! If that’s not a reason to pop this in the player, stop reading this now and pick up The Hours.

If you like a fun slasher film, where instead of Michael Myers or Ghostface or Jason you get man eating killer sharks, you’ll love it!

We start off our fable with Josh played by Twilight’s Xavier Samuel, who is a lifeguard. He notices his friend is in trouble and heads into the water but alas… Josh’s friend is dead. Doh! 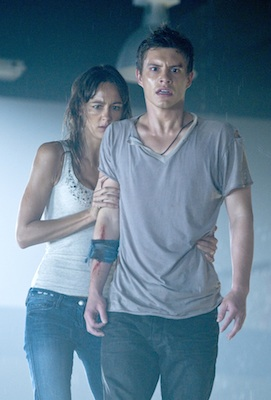 So josh is bummed, loses his girlfriend and now works in a supermarket. Interesting career transition but you know, what do you do when your friend becomes shark bait. Now, one day Josh’s ex wanders into his supermarket with her new man, as another supermarket worker is getting fired and cause a ruckus… “Can you describe he ruckus?” it’s not important. What is important is that the cop is Josh’s ex’s father. Josh’s ex, Jamie, and her father have… Wait… ISSUES! I know, you wouldn’t have thought that right?

So, everyone is chilling, picking up some iceberg lettuce and roma tomatoes when… a giant tidal wave or tsunami hits the small town. The supermarket is flooded along with the car port and along with the wave brings the same shark that killed Josh’s friend all those years ago. 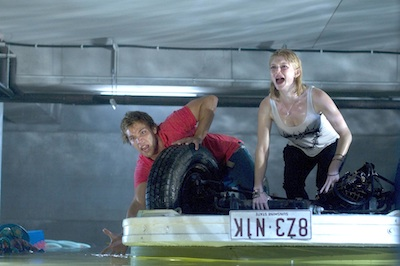 You don’t go into a movie called Bait hoping to fall in love with the catchy one liners or characters… You go to watch people get slaughtered by sharks.

The sharks are mainly digital creations but to be honest it’s not that bad considering. And having all the killing take place inside a supermarket is pretty fun. Where else can you pick up a can of pork and beans and avoid becoming shark fodder except in Bait! Awesome! 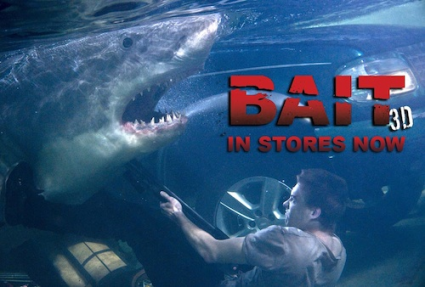 As the sharks pick off people one by one, they use the setting of a supermarket really well. I mean it’s a supermarket with SHARKS! God bless that! Seriously!

This is a lot of gory slasher fun and if you’re in the mood for some cheesy awesomeness give it a spin!

The one quibble I have is the lack of extras. I know this isn’t a film that relies heavily on Mise en se if you know what I mean however it would have been cool to have a little more in the way of special features! Not even a trailer people! Hello! There could have been a history of shark films, talk about about the making of the sharks and the effects, etc… Get it together people! 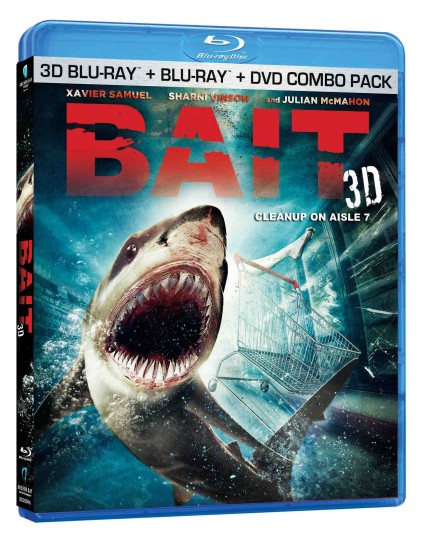