When it comes to animated classics no one can compete with Disney. They are the true masters  at the animated art form and I can’t imagine a child who has not been touched with the imagination and wonder that their films represent. When it comes to the Disney classics, none are as true to the original vision of Walt Disney than Bambi. It’s known the world over and has thrilled audiences for generations. 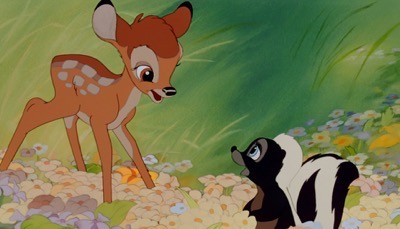 Now, Bambi is joining the Signature Collection which includes Snow White, Pinocchio and Beauty and the Beast. The film has been repackaged and this is the first time the combo pack includes a digital copy. 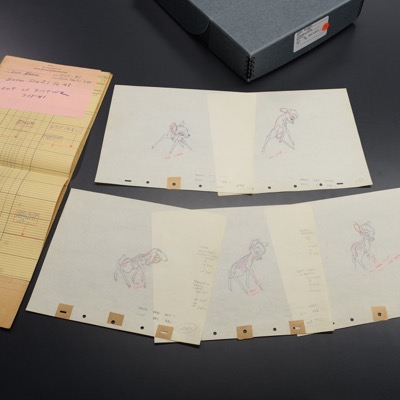 Everyone knows the story of Bambi, and many of you reading this might have been traumatized by it as well. It’s a simple story and to be honest I don’t know if this type of film could even be made today, what with exploding Transformers, zombie pirates and video games brought to life filling the multiplexes. There really is no giant quest in Bambi, it’s a simple slice of life story and that why the film is so precious. 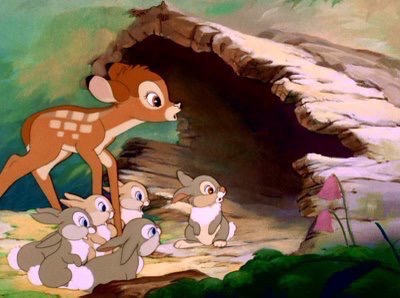 Bambi is a coming of age story that follows a young fawn who experiences loss, happiness and very real realities. After learning to walk, Bambi ventures out into the forest to see the world, there he meets all kinds of amazing creatures like skunk Flower, rabbit Thumper and even a young doe named Faline. Bambi’s mother takes him to where all the deer gather and here it’s where Bambi realizes the greatest threat to him is indeed man.

Bambi grows up and survives the death of his mother, having to courage for food, and so much more. Before long his antlers start to grow and he reunites with all of his old friends and falls in love. This is a deceptively simple story but that’s the power in the storytelling. It’s what everyone faces in life, the loss of innocence, having to mature and stand on your own feet and the comfort of amazing friendships. Stories are not told like this today and it’s a shame because there are so many powerful stories to be told about growing up and shedding the skin of youth. 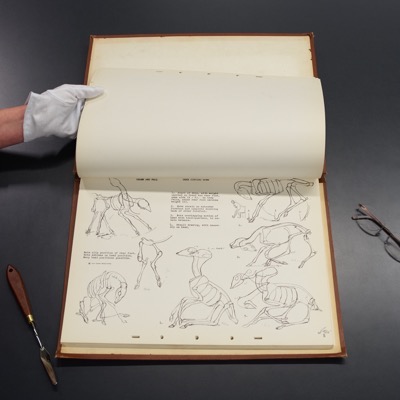 In the Signature collection, the transfer is the same as was on the Diamond Edition put out some time ago. That’s fine with me because this transfer is amazing. The time and care that was put into it, is so evident on the screen and while I’ve stated this before seeing an animated classic like Bambi on high definition is like watching it again for the first time. It’s stunning. 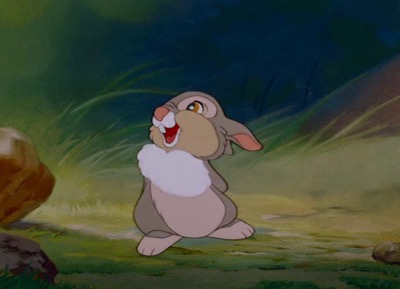 This transfer is amazing because at once it cleans up the picture quality but also keeps it true to the source material, being careful not to modernize the animation. Films are not made like this anymore and you can see all the textures and brushstrokes, it’s exquisite. 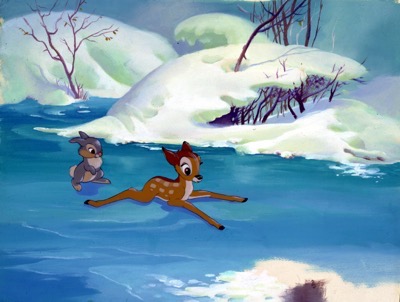 This release includes several special features new to this edition as well as some other bonus features that were on the previous release.

The new features include:

Studio Stories: Bambi – This features archival clips and they compare how different sequences were done and how the animators made great pains to have the animals appear more realistic than in the previous Disney films.

Deleted Scenes – There is just over seven minutes of additional deleted scenes, most in the very early animated stages. There are introductions by Floyd Norman an animator on the film.

Oswald the Lucky Rabbit: “Africa Before Dark.” – This is a vintage short that is just under six minutes in length.

Bambi Fawn Facts – This is a short feature with some trivia about fawns, deer, skunks and more.

The other bonus features were included in the previous release and include:

Deleted Scenes – About six minutes of deleted scenes and one deleted song.

The Making of Bambi: A Prince is Born – This is a great feature that runs just under an hour in length. Worth checking out.

Tricks of the Trade and Inside the Disney Archive are two featurettes worth watching. The Archive featurette is always great to watch.

The Golden Age – First time to Blu-ray this featurette looks back at the classic Disney films and how Bambi measures up.

There is also the original theatrical trailer. 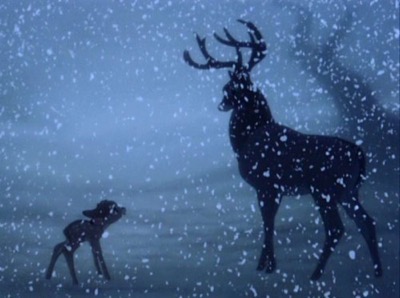 Overall, I have to tell you, I fell in love with this film all over again. It’s stunning. The animation is just out of this world, and I’m so thankful I was able to see it again restored to its original majesty. If you were or are a fan of this film and the other Disney classics, do yourself a favor and pick this edition up. It deserves a place in everyone’s collection.

Bambi The Signature Collection is out now on Blu-ray!