There are certain shows that you just don’t know what to make of. You say to yourself, “I want to see that” for some reason just never find the time to do so. Such is the case with Bates Motel. The series that concluded it’s first run on A&E has just been released on DVD and blu-ray and let me tell you whatever you’re doing… STOP. Press the pause button and watch Bates Motel. To say, I was blown away is an understatement.

Based on characters from the book and movie Psycho, Bates Motel takes what we think we know and turns everything on it’s head. Taking place before the events in Psycho and in a different era and town, Norma and Norman Bates have just purchased a motel. Yes, THE motel, the Bates Motel. After the death of Norma’s husband she takes the insurance money and tries to start a new life for her family.

Unbeknownst to her a new highway is going in which will prevent her motel from even being seen by tourists. Add to that her other son Dylan is back because he doesn’t have a place to stay or money. On one of her first nights in the new town, the motel’s original owner, who lost the family motel due to foreclosure, comes looking for payback and well… Doesn’t make it much past that. 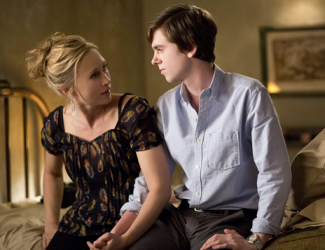 Norma and Norman take the body and dispose of it, thinking it will ruin the business and because Norma wasn’t just acting in self defense. In the meantime, Norman starts a new school and is trying to adjust the best he can making friends with the popular girl in school, Bradley and also Emma, a young girl with cystic fibrosis. 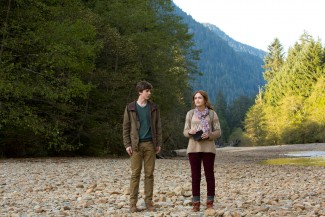 While all this might not sound exactly earth shattering, I assure you, Bates Motel is one of the more intriguing shows of the year. Let’s start with the performances, Vera Farmiga gives the most complex vibrant performance I have ever seen. She perfectly captivates the bipolar, crazy, but fiercely protective mother hen figure and honestly gives the best performance of this year. With a raise of an eyebrow or the pursing of her lips, Vera Farmiga not only inhabits Norma Bates, she lives and breathes her.

Freddie Highmore, as Norman Bates has a difficult task of portraying a young Anthony Perkins but not being a caricature. Freddie Highmore is a revelation in the role and captures Norman’s innocence while also showing the darker side of the character. He is stunning in the role.

On blu-ray Bates Motel sparkles. The picture quality brings out the muted colors and brilliant set design come to life. However, it’s the moody atmosphere that is enhanced even more by the high definition picture.

The bonus features include the standard deleted scenes and a lively panel discussion with the cast at the Paley Center (which I happened to be at). I wish more television series sets would include bonus features like this, it really adds to the experience seeing the actors talk about their characters with an intimate audience.

All in all, I can not recommend this series more. Every episode gets so much better and builds on the characters and story lines in natural and unexpected ways. I only hope that the second season is just as good. Pick up this series now.

Bates Motel season one is out now on DVD and blu-ray! 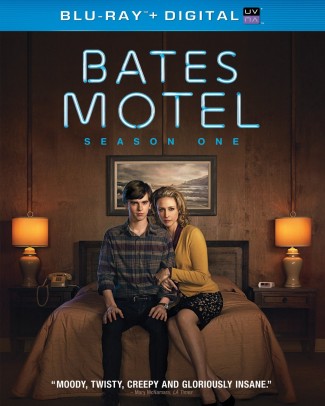