The Lovely Erica is back and reporting from one of the most anticipated… Well… It’s a summer movie. LOL… I can only be talking about Transformers on the sea AKA Battleship. I was heading to this premiere but the 10 here in Los Angeles was slammed. Like it took me an hour to get .3 miles. Sigh…

Erica was a little more proactive and made it on time! LOL… Check out her full recap after the jump!

So it’s almost summer which means it’s time for all the big summer movies including Battleship. I’m here mostly to help Scotty who has been plotting and planning for this premiere which marks Rihanna’s acting debut.

This is my first trip to a premiere at the Nokia Theater and it’s interesting. They’ve closed down the street so there’s plenty of room for fans to watch, though there is a big white tent bisecting the area. There’s a fan section on the carpet and Billy Bush is conducting a bit of a live show. They definitely want to pump this movie up.

I’m hanging with Scotty and CB and Billy Beer are somewhere around as well. We’re near one of the biggest Batman fans ever and a Mike the Fanboy reader who has a birthday the next day and is hoping to parlay that into some good luck today. We chat, passing the time pretty quickly.

At the appointed hour, the first limo shows up and Malin Ackerman (Watchmen, Rock of Ages) gets out. She’s a surprise guest so no one calls for her. 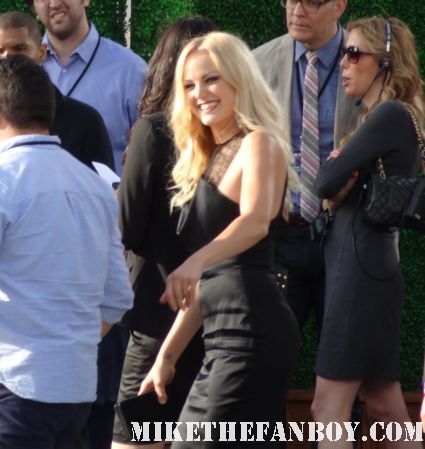 The next limo drops Tadanobu Asano! We all yell for him and we get a smile and a wave, but he is not coming over. According to IMDB, he’s known as the “Johnny Depp of Japan” and I can only assume that’s more in reference to his acting choices than his interaction with fans. He is not signing for 58 minutes today… 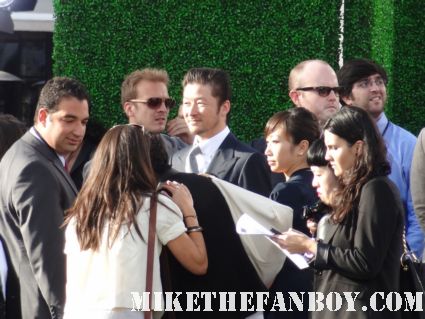 Jesse Plemons drops and is as nice as can be. 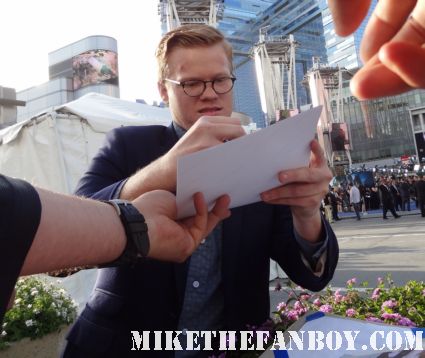 He comes over and signs quite a bit for a few sections of the barricade until he’s pulled to the carpet. 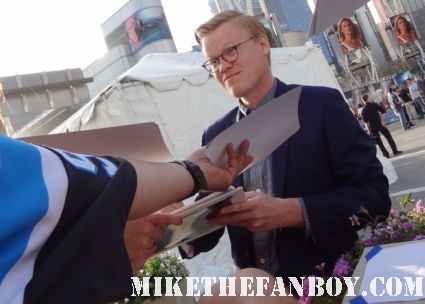 There is a long pause where nothing happens…then a limo shows up. The door opens and we spot Brooklyn Decker. We call for her and then the limo door closes with her inside. Huh?

A few minutes later, she gets out of the limo, on the other side. She heads straight for the carpet and doesn’t even look over. Uh boy. This is not shaping up to be a good premiere. 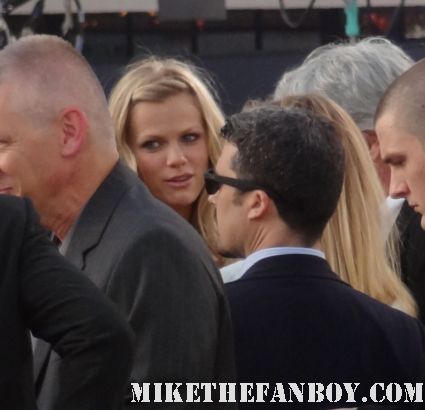 What’s odd is that everyone is still clustered at the start of the carpet. 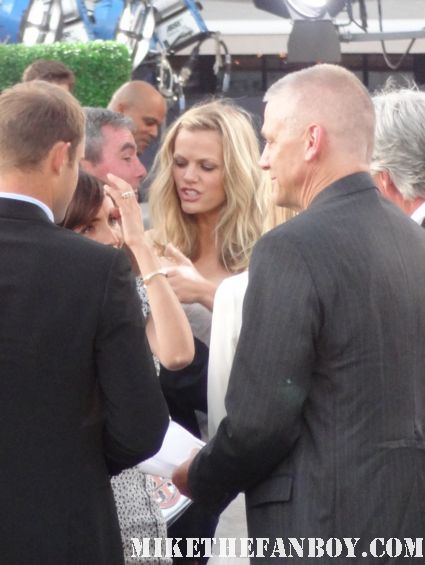 We can still see Asano and Jesse and Brooklyn. Soon, they clear the carpet and move everyone back and we can see some camera crews running toward us and the mysterious white tent that’s bisecting the barricade. Ah! Something will be coming out of the tent.

While the crews are scrambling around, we see the star of the movie, Taylor Kitsch arrive. 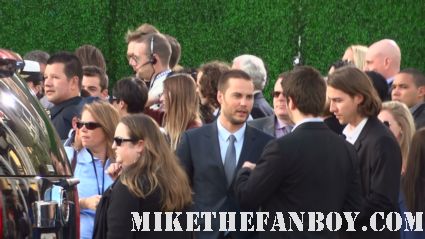 We start yelling for him and he asks his publicists if he can come over to us and they tell him no. Since there’s a log jam at the moment, he’s still standing there and we continue to yell. Again, he asks and is told no. 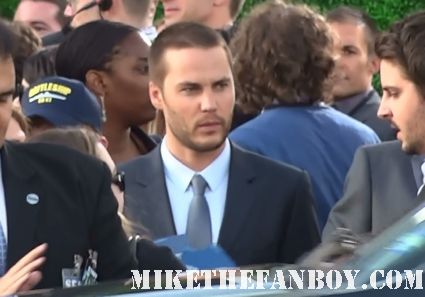 Finally, one of the razor-hamster-balls-of-death slowly makes its way from the white tent next to the blue carpet. The slow speed of the ball makes it seem less impressive, even as the director, Peter Berg, accompanies it to the carpet. At this rate, it’s going to be a while for it to meander down the carpet and for the actors to head down and do their press duties. 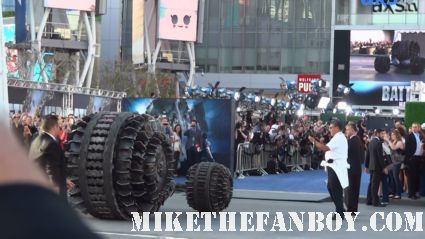 Taylor and his people finally realize this and he’s allowed to approach the barricade. Yeah! He’s headed straight towards us when his people point him over to the next section. Boo!

He’s taking his time, but headed in the opposite direction from us. (It’s like a curse or something!) I head over to join the end of the line since Taylor is one of the few people that I need on my Battleship poster from Wondercon. Taylor is signing and taking his time with folks. Nice guy and I finally got something!!

I head back and learn that Chris Brown has arrived. He’s in the area shooting a music video so this could cause some awkward moments for a certain ex-girlfriend. However, she’s still nowhere in sight yet.

Soon after, Liam Neeson arrives. Liam is not known for being a good signer and, sure enough, he waves and gives us an enthusiastic thumbs-up sign, but he’s not coming over. No luck for the Batman fans! 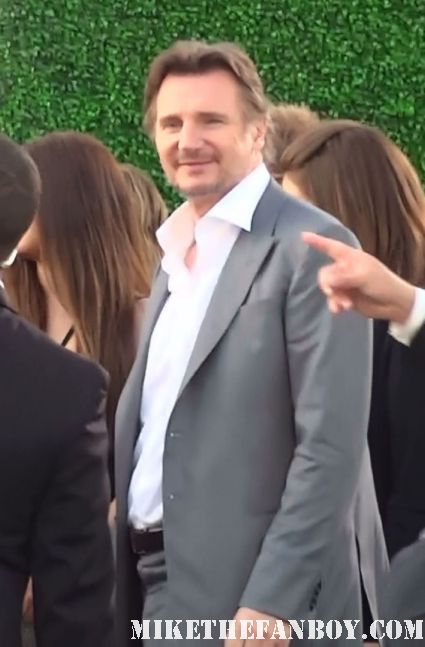 There’s some more dead time and it’s getting close to the start of the movie. A limo finally arrives and it’s Alexander Skarsgard, looking gorgeous as usual!

We start yelling and he takes a second to greet some folks and then heads straight over to the barricades. Yeah! Alexander is always good at greeting fans. 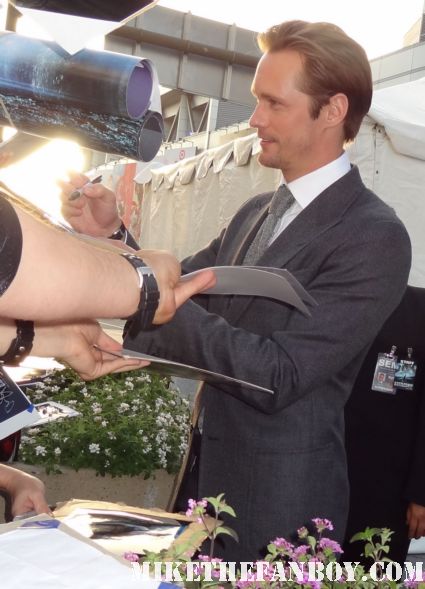 Today he is more inclined to do pictures and is signing fewer things. 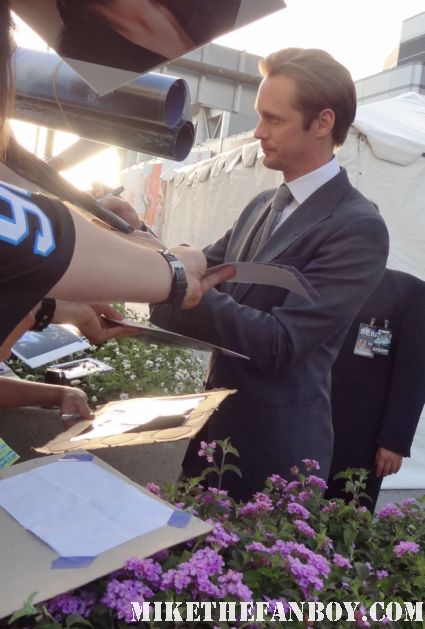 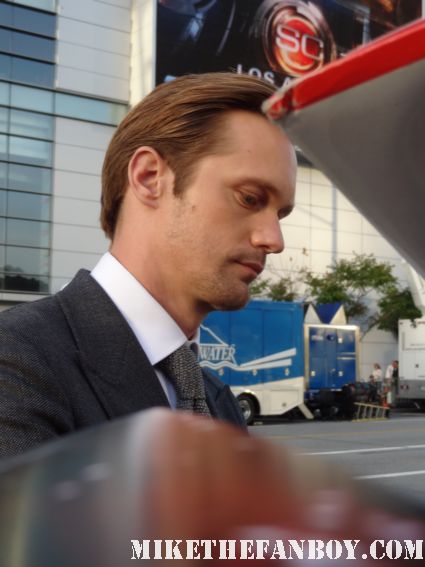 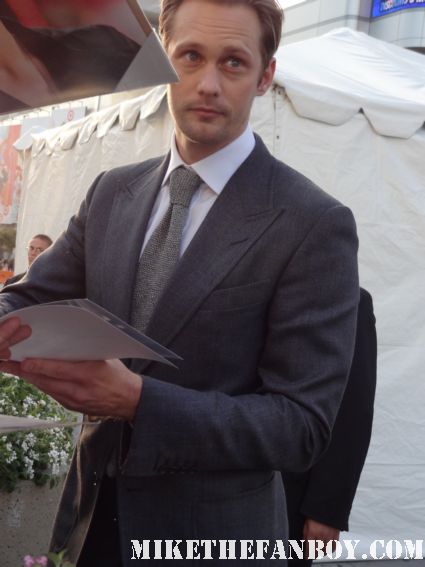 I get him on a Rolling Stone cover and get a smile after I thank him. Love him!

After he gets pulled to the press line, we wait. And we wait. It’s well passed the movie start time and we still haven’t seen Rihanna. Security comes by and starts to hand out tickets to the premiere. They’re being stingy at first, but then they realize that they have stacks of tickets so they start handing over fistfuls. Pretty much everyone gets a ticket and could still invite the rest of the family if they wanted to.

Suddenly an empty limo pulls up and a publicist jumps into the car. We’re guessing that they are going to fetch Rihanna.

Sure enough, the limo returns a few minutes later and Rihanna gets out – on the other side! No! Scotty is yelling for his life, but she’s so late that there is no way she’s coming over. 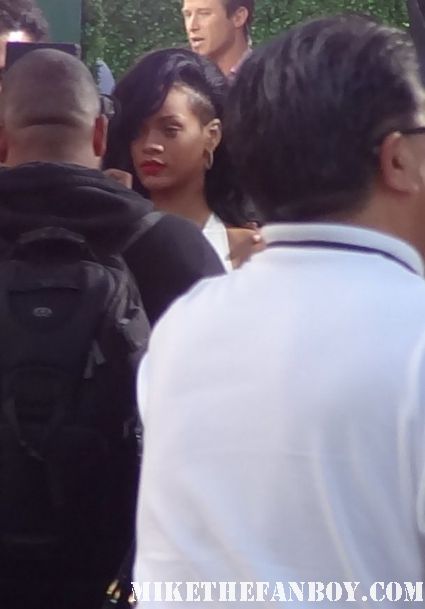 Poor guy! After the Michelle Pfeiffer thing at the Dark Shadows premiere, the universe owes him big time… 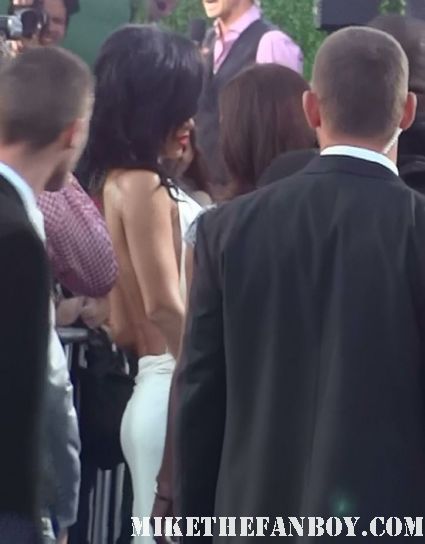 With that, a few of us head out to put away all of our crap and actually watch the movie. On the way to the theater, CB spots Joe Manganiello. Oh crap!! He’s one of the last True Blood people I want to get a picture with. I guess that means I need to wait to find him after the movie as there are about 5 barricades between me and him right now and I don’t think I can make it.

CB and Scotty decide to wait and watch for people to exit while Billy Beer and I decide to head in.

As we settle into our seats, we listen to the DJ for a while and then Billy Bush gets on stage and blabbers about nothing a few minutes. 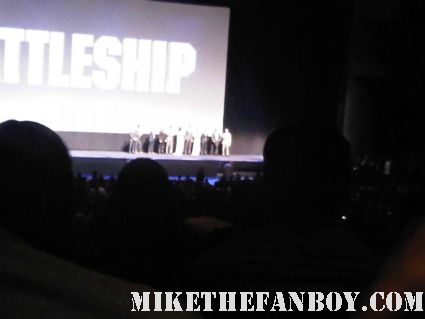 Peter Berg then takes the stage and introduces the cast. After they take their bows, they very publically make their way to their seats. I’m surprised that they are staying to watch the film as Battleship has premiered in several countries and I can’t imagine how many times they’ve seen the film.

After the film, we make our exit and see that a ton of folks are on the barricades to watch the departures. CB is there but Scotty left minutes earlier in disgust. Apparently he got really close to Rihanna who waved at him, but didn’t stop. Poor guy!

Since the fans didn’t have much luck during arrivals, the barricades are overflowing. At this point, my main goal is getting that picture with Joe. There are several ways guests can leave the premiere so I’m scouting around, but a 6’5” werewolf should be pretty easy to spot, right? (“I’m on the hunt, I’m after you…”)

I see flash blubs pop at the barricade and I head back over to see that Tadanobu Asano is signing. Sigh! I’m never around when he’s signing. Ah well!

I continue looking around and then I see my quarry! Joe is headed over towards us. I ask him if he’ll do a quick picture and he obliges me kindly. Now I really suck at doing the self-portrait shots and when you’re getting a picture with someone who is well over a foot taller than you, well, let’s say the results aren’t pretty! However, he was kind enough to stoop down and draw me in close (swoon!) and I managed to get most of him in the picture. So nice! 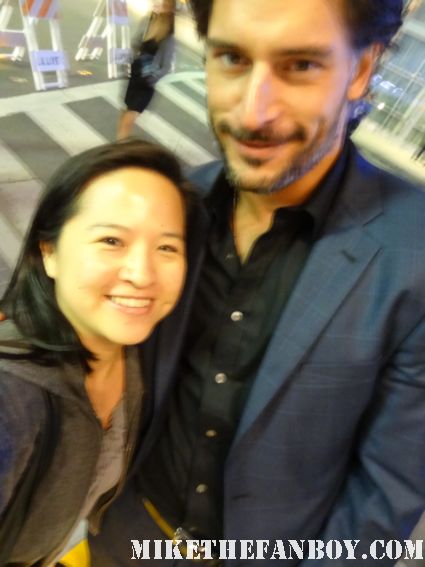 Alexander is also leaving the premiere and the two spot each other and exchange an enthusiastic hug. Alexander then stops to do some more pictures for a barricade that’s about to topple over.

I hear a big yell go up and see that Rihanna is approaching. She’s surrounded by an entourage of 20 folks so she manages a smile for the fans over her shoulder, but that’s it. It’s a good thing Scotty didn’t stay since nothing happened…sigh!

Peter Berg then shows up and starts to sign. It’s adorable to watch his kids recording their dad with fans with their iPhone cameras. The director is training his kids on the craft at a young age. 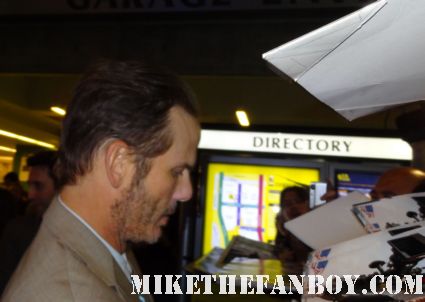 And then I called it a night! So I was happy with getting Taylor Kitsch and Alexander and my (crappy!) picture with Joe Manganiello, but it was not a great premiere for most folks.

And how was the movie? Well, the story is better than Transformers (which I did not like) and is generally less shrill. However, the characters aren’t really developed so it’s still pretty empty. Alexander and Taylor give it a good shot at developing something, but the story and the spectacle are what drive the film, not the characters. I did like the “thank you!” message to the military, even though it was a bit heavy handed sometimes. Definitely a summer popcorn flick. 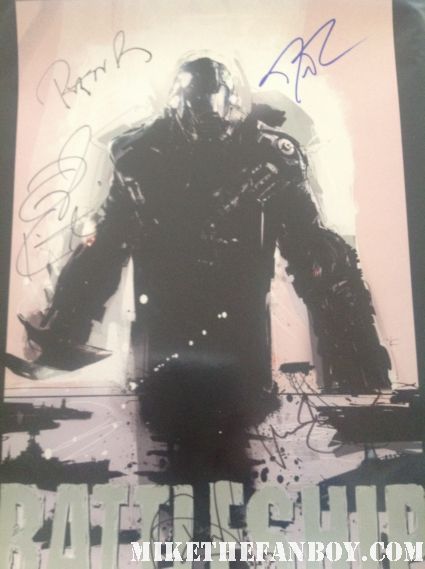