Home / JM • Reviews / Beanpole Movie Review! JM Says, “It’s one of the most profound films in the past decade!”

Two terrific, brilliant breakthrough performances by its leads, “Beanpole” is an instant timeless cinema classic. Kantemir Balagov’s sophomore directorial effort empathetically conveys the struggles of war with one of the most profound films in the past decade.

“Beanpole” takes place during the first autumn after World War 2 in Leningrad. The film opens with Iya (Viktoria Miroshnichenko), who suffers from post-concussion syndrome, hearing a piercing sound and the ringing renders her frozen while working with laundry. We soon learn Iya is nicknamed the titular “Beanpole” and has been working in a trauma hospital as an attendant. Soon her supervisor requests her presence and offers additional food rations to feed her child Pashka since one of the other employees has recently passed away under the radar. Iya graciously takes up the offer and we’re soon introduced to the energetic, undersized Pashka. 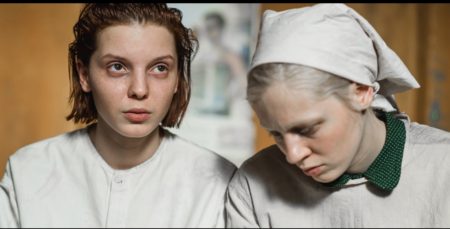 One day after work, Pashka playfully continues jumping on Iya while she’s working on something, but begins to have a panic attack and accidentally suffocates the child. Iya is completely grief-stricken and is at a loss for words when her friend Masha (Vasilisa Perelygina), the actual mother of Pashka, returns from the front to see her son. Masha soon learns her son “died in his sleep,” but Iya accepts full responsibility and asks Masha to blame her. Instead of dwelling on the tragedy, the duo decides to go out dancing despite Iya’s reluctance. Once again, tragedy brings them closer, but will this finally tear them apart? 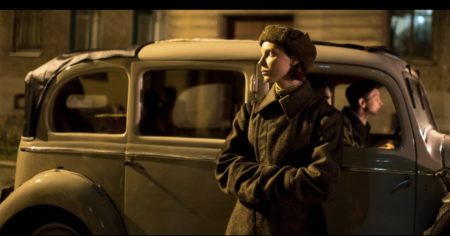 Newcomers Viktoria Miroshnichenko and Vasilisa Perelygina are both breaths of fresh air. Considering this is each their first film all I can say, what will they do next? Much like “Blue Is The Warmest Colour” and “Portrait of a Lady on Fire,” this film features two phenomenal performances by the lead actresses. Both actresses amazingly portray the loss of youth in two different, yet distinct ways. Looking into Miroshnichenko’s eyes, you can imagine the thoughts of death and despair dripping down her mind constantly causing panic attacks to paralyze her. Whereas Masha manages her pain by ignoring physical damage (such as her “shrapnel scars”) and suppressing the psychological damage by distracting herself with physical pleasures. Both women are damaged by their experiences.

Despite tragedy bringing Iya and Masha together, they possess a confusing, complicated relationship. Although they intensely bonded after fighting side by side as anti-aircraft gunners, they’ve grown apart and are struggling with trying to emphasize their feminine qualities once again back home. Being nicknamed “Beanpole” causes Iya intense insecurity as she towers over most women and the majority of men she comes across are typically bedridden and/or have a disability. Through the course of the film we discover Masha has had dozens of abortions on the frontlines rendering her infertile. After the loss of her child Pashka, she has become obsessed with starting a family and will stop at nothing to make that happen. Neither woman can accept the biological and psychological shift by coming back from war. 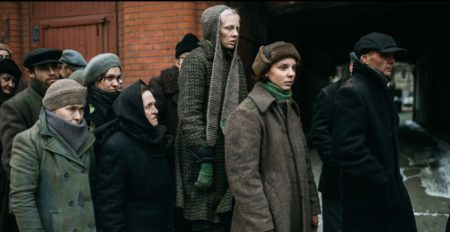 Trying to recover from war and the atrocities associated will linger long after with no real timetable telling you of its impact. For those unaffected, trying to describe or convey the heaviness of your experiences hinder everyday life. The loss of youth is the only thing outsiders can comprehend. War leaves its citizens physically and mentally broken down with the hope one day you can finally recover from your experiences. Presiding over traumatized soldiers with most of them shell-shocked, you’re able to see through Iya and Masha’s eyes the horrors of readapting. One patient Stepan, his entire body numb and paralyzed, relays to his wife “I’m sorry about the war” trying to justify his changed condition and finally accepting it will never change. Through the constant use of facial expressions Balagov beautifully captures the impacts of war and the progression of its aftermath without simply showing damaged buildings and rubble.

Cinematographer Kseniya Sereda creates an impactful sense by forcing the viewer to hear every sound coming from the actors’ bodies with how they breath, swallow, cry, react, etc. The closeups create certain types of intimacy with each character and allow audience members to appreciate the impacts of war with each facial expression. To enhance the film even further, the color palette creates an even more devastating drama with its use of red and green. Throughout the film green illustrates the idea of life, renewal, energy, and growth with red complimenting the danger, death, power and strength needed to survive. Had the movie been shot in black and white like “Cold War” or “Schindler’s List” it would have conveyed the horrors of war without any hope for a better life. The consistent color palette of green and red reflect the inner traumas more prominently to create a more gorgeous, gut-wrenching experience. Adding more depth, the conscious choice avoiding Communist symbols creates a timeless movie. 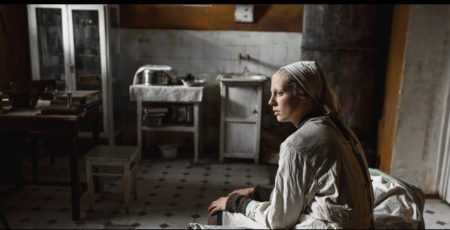 Needless to say, Balagov’s brilliant movie is an uncompromising, unique and entertaining movie, which is a great relief from most of the recycled arthouse foreign films normally attempted nowadays. No wonder why the film won the Best Director and the FIPRESCI Prize for Best Film at the Un Certain Regard section at Cannes. “Beanpole” is a must-see and a great film to kickoff the new year! The next great Russian filmmaker has arrived and his name is Kantemir Balagov.