Who watches the watchers that watched “The Watchmen” phenom?  Because they are the ones I want to speak to about this whole “Before Watchmen” fiasco.

Let’s get one thing straight.  I like Alan Moore but I really dislike Alan Moore.  I know people will judge me for supporting the art, when the person is someone I’d like to slap in the face but honestly his stuff is soooooo good!  Except maybe “Lost Girls” but even then some weird, grotesquely sick and twisted part of me could appreciate the nightmarish madness that was those graphic novels.  But we’re talking about “The Watchmen” which is probably one of the most perfect comics/graphic novels/books/stories to come out in at least the last 30 years.

So why on earth would DC make the dubious decision to try and write prequels?  What did they think we missed from the original?   What did they think we, the collective readership, didn’t catch or weren’t able to reason out from the subtle and not so subtle things weaved throughout the original?  Either quite a bit, or they were just after money by riding the name brand.  I’m putting money on the latter.

Ok, maybe if I read these first….but that’s hard to argue because I didn’t.

The brilliance of the original was that it showed us a very human side to superheroes.  A ‘this is what they’d be if they were you or I’ version that I feel everyone who read it got on a guttural level.  It was visceral.  It was shocking.  It was ugly.  It was beautiful.   This takes all of that and purees it down to watery mush.

I only read two of them – honestly that’s all I can handle – so let’s take each story:

Where do I begin?  The first story is told in flashbacks by Hollis Mason (Nite Owl I) right before the release of his book “Under the Hood”.  He is dealing with the fact that he wrote a book that was a little too truthful and is getting a lot of backlash from his former cohorts.  Of course we all know that isn’t the version printed.  I liked the artwork, the kind of retro feel, but the flashbacks….not so much.  Maybe because we all kind of know the major events, there’s really nothing that this ads so it seems superfluous.  Although I will say it did make The Silhouette the ONLY Minutemen character that is a real crime fighter and decent human being.  Well Mason is a complete boy scout, but she’s actually doing something worthwhile.

The second…I can’t say I’m a fan of the artwork at all and I didn’t like the story.  I didn’t feel the need to read the original Silk Spectre being ‘Mommy Dearest’ or have to actually deal with Hippieville San Fran while Silk Spectre II is up there being a rebellious teen.  None of it was interesting, at times it was more of an acid trip than the LSD they use and the thinly veiled dig at popular bands of the sixties was just unnecessary because, again, it added nothing. 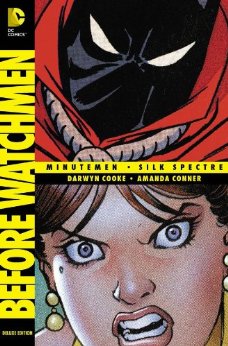 “Ozymandias” – Really is there anything more boring than having to constantly be in the mind of a genius?  I mean even Conan Doyle had someone else telling Holmes’ stories.  Did we learn anything about Adrian Veidt?  No, and that’s about all I can say.  The artwork, on the other hand, I really enjoyed. I mean I’ve always wanted to slap Ozymandias’ smug golden boy face and the artwork by Jae Lee made me want to do so even more.  I mean this in a good way.  The colors, the style, the almost ‘glow’ it was given.  Spot on to me.

“Crimson Corsair” – Infinitely more entertaining than the first story.  It’s a perfect dark, macabre horror story in the vein of Poe.  The artwork adds to it quite well.

There is a bonus story about “Dollar Bill”  by Len Wein with art by Steve Rude but it wasn’t really all that exciting. 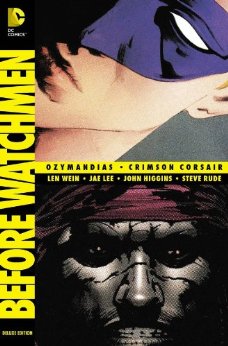 I don’t know if I should blame the writers or if they were just following direction.  They should’ve rebelled if it was the latter.  Which is a shame because these are respected industry names.   Len Wein was the editor for the original!  *sigh*

I don’t know.  I think I would’ve rather had a ‘Minutemen’ book with one over arching storyline/theme and saved these individual psychoanalysis bits for the extras.  They just seem so disjointed that I get no feeling of them as a team.  I can’t for the life of me understand how they all worked together after reading these, there’s no connection, nothing that binds them at all – not even in a truly dysfunctional family way.

If you haven’t read the original then do so and skip these.

And for the love of everything, do not think that the movie was any substitution for the comic/graphic novel.   I mean it’s ok, but as is usually the case, the original source material is so much better than any other incarnation that spins from it.