I get so happy when Big Mike, AKA The Other Fanboy has success! There are times when I’m like Big Mike, push your way in, push those people down! And while I don’t advocate people push or shove… Mike needs to get in there lol…

Anyway a couple weeks ago it was like Malcolm McDowell week in Hollywood and did I go out… Nope… Sigh… I always had something else going on… And then sickness set in. Ah well… There will be another time!

But Big Mike had a lot of success! Check out his recap after the jump!

It was the Sunday of WonderCon weekend and I had decided to skip the last day of the con for a couple of reasons. One, gas was at $4.35 a gallon and I didn’t feel like donating any more money than I have to to “Big Oil”. (Price-gouging bastards!) Two, Malcolm McDowell was doing the third of three Q&A’s that weekend. He had just received a long overdue star on the Hollywood Walk of Fame on Friday. (I would’ve assumed he had one years ago.)

Those ceremonies always take place during a workday and I can never get to them because the boss is never out of town when one takes place. The commission must send him a memo when these things take place so he knows not to skip town at the expense of my happiness. Oh well. I had one last chance to get this dude’s signature so I decided to head out. By chance I saw the marquee a couple of days earlier with the event info on it, otherwise I woulda missed this gem.

This is the dude that killed the Priceline Negotiator in “Star Trek Generations”! How could I not get him? Luckily I was able to grab a Dr. Soran figure at a WonderCon booth the day before. If I wasn’t able to get him to sign it at least I was only out a few dollars. Not a bad risk. I also brought along my “A Clockwork Orange” and “Gangster #1” DVDs. Lets face it; “Orange” is his most iconic role in Stanley Kubrick’s classic. It would be a cool DVD to get signed. Between that and “Star Trek 7”, those have to be the two most popular images he signs. I just hoped he wasn’t one of those people who get tired of signing their “popular” images over and over. I’m aware entertainers have other work and I understand if they’ve moved on, but sometimes a particular character or movie is what got someone to become one of their many fans so quit complaining about your blessings and sign! Whew, almost fell off my soapbox. For you kids who don’t understand what a soapbox is you can google it like I had to do.

I arrived at 6:40pm and the movie was supposed to start at 7:30pm. I noticed a brother and sister pair that I see often at a lot of these kinds of things and they walk up to the front entrance with a few more graphers waiting for Mr. McDowell.

As I walked across the alley where the back door to the theatre is I noticed an employee standing in the doorway waiting for someone. Great, now I have to wait here and watch the front as well. At least I get a clear sightline from here. The only thing is I’ll have to bolt to the front if this guy is just a front to get us to wait at this spot. Plus, that puts me at the back of the pile if Malcolm does go in the front. I’m also wearing nice shoes that aren’t comfy to run in. I try to dress nicer for Q&A’s so the handlers don’t judge me and scowl as soon as they figure out I’m an autograph collector. I don’t know why they hate us so much. Oh wait, autograph dealers. That’s why they hate us. I guess I can’t blame them, but they still suck. Lord knows I don’t care much for the dealers myself. They don’t usually have any qualms about “covering” your item to get their multiples signed. Kind of a jerk move. There isn’t much you can do about it because if you make a scene it almost always scares off the signer. There are a couple of dealers I’ll have to deal with this evening but it’s mostly peaceful at this venue.

It’s actually a little windy and slightly chilly out, but at least the rain from the day before has finally gone away. Another collector has made his way to the show and we swap info about what we know about Malcolm. Apparently he’s been signing this weekend, but “Redbull”, an autograph dealer that seems to get under everyone’s skin made him a little angry a night or two before. Whenever someone says “Redbull” made a celebrity angry at an event no one ever doubts it. His name is like “Voldemort” to autograph collectors and dealers alike. Everyone fears his presence because many celebrities know the sound of his voice and cringe when they hear it before avoiding whatever quadrant of people they think he’s near. I’m hoping he got all he needed signed wherever that event may have happened. I don’t feel like listening to him yell where everyone inside the theatre can hear and be annoyed too. He knows how to get a star’s attention. I’ll give him that.

At aboot 7:20 I see a guy aboot my height with really really white hair approaching the theater from the opposite side I’m on. Hey, that’s Malcolm McDowell, I thought. That figures. Stupid alley entrance was just a diversion from the autograph gods to stiff me. I wasn’t aboot to let that happen. I confirmed his identity to the collector I was standing with and we booked it to the small group of folks surrounding him with small stacks of identical pictures. (Dead giveaway for a dealer.)

Malcolm borrowed a blue sharpie from one of us and started signing away. I heard he was a “one-r” lately, but he seemed pretty cool signing multiples for folks despite his quip to someone about signing the same picture for them over and over. I slipped my figure into the fray and he skipped over it a couple of times. Not a good sign. I try to get those signed first cause I’m what people call an idiot, but those people don’t like cool stuff, so they can bite me. A theatre handler tells us that Malcolm has to go and that chill I get when I hear that goes down my spine, cause that means my crap ain’t getting signed. Luckily, Malcolm ignores him and grabs my figure and signs right across the bubble. Cool, that’s where I prefer the signature usually. I’m one for three! 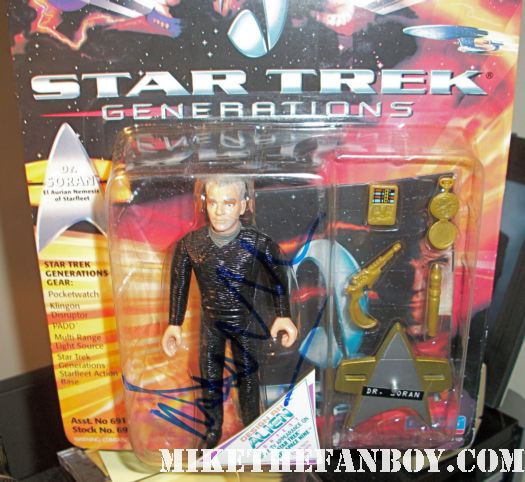 An SUV pulls up to the theatre and Malcolm tells us that he has to tell his wife goodnight. He excuses himself and chats with his honey for a bit before planting a smooch on her lips and heading back our way. For a moment, I wonder what it would be like to be Mrs. McDowell having such an ultra-cool guy who will sign whatever she wants, whenever. Than I get back into autograph mode. I’m perfectly fine with getting just one item signed but Malcolm decides to be Mr. Awesome and signs for round two. This time I slip my “Clockwork Orange” DVD in the fray. (Rent it for the kids!) This doesn’t take as long to get signed and this time he does head in when beckoned. I’m stoked!

When I was just a young hottie, my big brother used to play the soundtrack constantly on his record player. (That’s a box that plays a black vinyl disk that has lines of music on it. It’s the 8-track of cd’s.) This will be a nice item to possibly give him if I’m in a generous mood. We’ll see. Being that this was a Q&A I thought to myself “Why not wait it out and get the last item signed?” Sounded like a good idea. The movie was three hours long and I didn’t see Mr. McDowell sticking it out that late. I decided to stick around for a bit. Only three graphers and myself were left so I had a good shot. I also felt like I was on a roll. It’s been a very bad year for me autograph-wise and you never know when you’re going to get another shot at some of these folks, so let it ride, baby! Wow, that sounds like it was exciting. It wasn’t.

I gave it aboot an hour and decided to head home cause I was actually a little chilly. What a wuss. The other graphers thanked me for leaving cause whenever one of us leaves the celeb usually comes out ten minutes later. I made it back to my car and decided to nosh on a yummy sammitch my honey made for me. Good thing I did. After a few minutes I made a u-turn and headed home passing the theatre to make sure I didn’t leave too too early. Nope. All looked good. Two blocks later one my phone rang with one of the remaining graphers telling me that I should head back because McDowell was about to leave. One quick u-turn and I was headed right back to my exact parking spot I left just a few minutes earlier. Whew, it was still there! Now to do something I haven’t done in a few years. I had to run. Luckily, it was still easy to do. I didn’t get winded, or nothin’! I was so proud. I got back to the theatre just in time. Malcolm was just aboot to come out and I was ready with my last item.

I could’ve brought the DVD insert, so I could give that to my bro, but I forgot it. I’m smart like that sometimes. I got my cover signed and Malcolm held onto the board it was secured on to sign any additional that may have been on it. What a mensch. I was three for three! It’s a very cool feeling when other graphers make room for you when they know you only have one. Doesn’t happen too often, but nice when it does. I think I’m going to leave early more often. 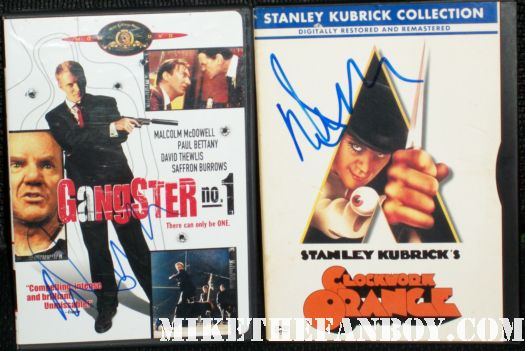