BIIIIG MIIIIKE! God Bless him! Mike made the trek down to Anaheim for Wondercon 2012 as did most of us in the Fan-verse I think. Again, I was super hyped for a convention here in Los Angeles but I dunno… It didn’t do it for me.

Anyway, Mike had a great time and ended up with a few signatures so he was super happy. Mike is a Star Wars junkie, which is what I call anyone who gets every action figure signed lol… Yes, I’m a junkie as well. You don’t know me! Don’t you judge! LOL…

Check out Big Mike’s report from Wondercon 2012 after the jump!

The weekend I had been waiting for had finally arrived.  In fact, it started on a Friday and luckily my boss didn’t ask me why I wanted this one off.  It was my first WonderCon.  This year the convention center in San Francisco where the event is usually held is under construction so this con was moved to the one in Anaheim.  Last I heard it wasn’t determined if it would move back to San Fran or move around the country.  This is Comic-Con’s sister convention.  It’s Comic-Con without the hype and Hollywood.  It was kinda weird for me.

Usually my honey and I are stressing out aboot getting to the convention center as early as possible to wait in autograph lines, but there aren’t really any of those at this event.  Unless you count the ones at the paid autograph tables, but there aren’t usually lines at those because not a lot of those people have the following they once may have thought they had.  In fact, not many folks over the age of twenty-five have probably heard of most of the people that were charging for their signature.  I always hate walking by those tables.   I feel so guilty if I accidentally make eye contact and still don’t purchase anything.  WonderCon put all those folks in the back corner of the convention next to Artists Alley like they were the homeless at an off ramp.  It’s all good.

I actually intended on going there for one guy, Peter Mayhew.  He’s the dude who played Chewbacca in the first three “Star Wars” movies and also the sixth one.  I got him on a figure at Comic-Con over the summer on a figure, but he was in a grumpy mood and wouldn’t use the pen I offered him to sign my figure.   That’s a no-no when you’re paying.  As I’m getting a little older, I realize there are just some folks I’ll never get unless I pay.  This is one of the people that I reluctantly have to give in to.  I knew he’d be at WonderCon (I get a nickel each time I type “WonderCon”!) and I obtained a couple of re-issued figures of Chewbacca that came out when I was a little kid.  I thought they would look great with Peter’s autograph.  I was hoping he’d sign personal items for a cheaper rate, but my friend, who was a regular customer of his, could not persuade him on that.  Bummer, but it was worth a shot.  Now, when you’re at these tables you have to pay attention to things because sometimes the signers grab the item and start signing it in whatever pen they want, wherever they want.   I like my figures signed in silver paint pen, not silver sharpies, not gold, not regular sharpies, unless it’s free and at an event and the person is signing for a large group of people.

Mr. Mayhew grabbed the first smaller figure and started signing in gold paint pen.  I understand.  He’s signed this figure a butt load of times and thinks it looks fine.  Thank something holy that he’s right this time.   The signature doesn’t look half bad at all.  Shortly after, my large size figure is signed in silver and I’m out a lot of money for the two signatures.  Not the greatest feeling in the world.  I don’t encourage paying another person for their signature, nor do I encourage charging someone for your signature.  I wish I wasn’t such an addict at this hobby.  I was hoping the penicillin my dentist prescribed me for getting my tooth pulled earlier in the morning would help curb me of this autograph craving, but no.  At least I still have time to go run out and get a quick std before I run out of pills, because lord knows a comic convention is the last place you’ll bump into anyone who has even had sex.   (Okay, like eight people there have done it, and the least they could do is not bring the damn kids in the strollers to large events like this.  There, I said it.) 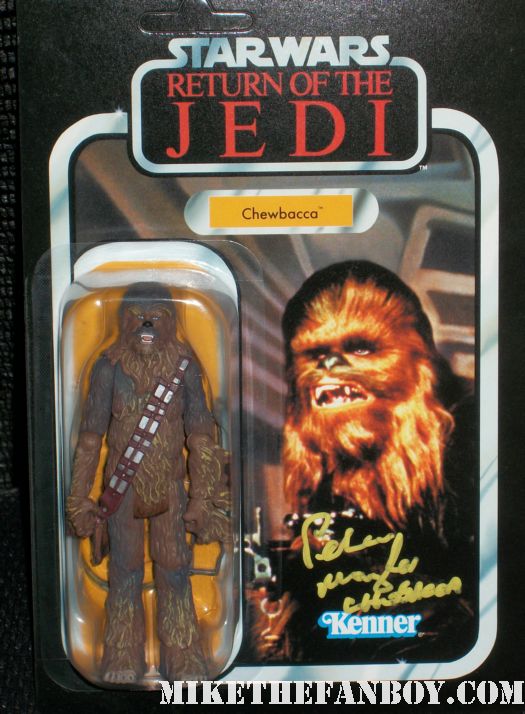 After I left the paid autograph section that Fanboy Mike so accurately called the “Sad Section”, I headed to a panel or two.  Since there were no actual cast signings or major star-power, like at Comic-Con, there was plenty of time to actually go to a panel and listen to what the folks were actually saying instead of trying to get a good spot to rush the panel when it was over for an autograph.  That was about it for Friday.

Saturday I actually paid for another autograph, this time from Ray Park.  He was Darth Maul in  “The Phantom Menace”, Snake Eyes in “GI Joe”, and Toad in the first “X-Men” movie. 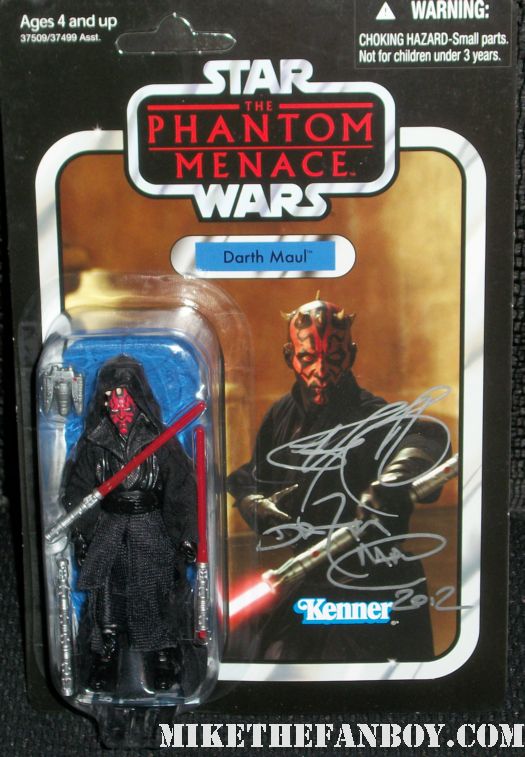 Aside from having traffic and parking issues that delayed him for a few hours he was as nice and accommodating as one should be when you are paying for their signature.  I had him sign a newly released figure on the classic Star Wars card back from the first trilogy.  Looked pretty cool.  After that, it was back up to a couple more panels. 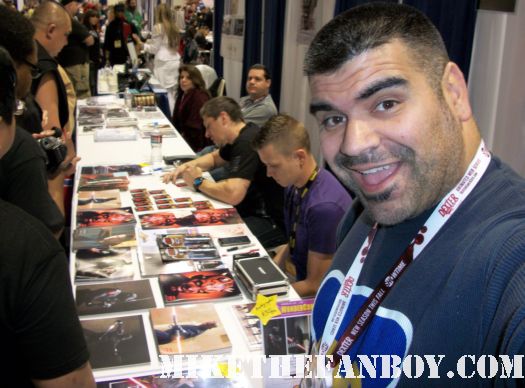 This time I did want an autograph or two from them.  A great writer by the name of J. Michael Straczynski put on a rare “workshop” panel discussing the ins and outs of writing in Hollywood and comics.  It was a great panel and extremely informative, if you must know.  Afterward, I approached him and asked if he’d be signing any items outside the room and he respectfully declined.  I complemented him on his great work and shook his hand before holding back and following him after a modest group crowded around him to ask more questions and whatever else.  I was waiting to see if anyone else would ask for an autograph and if he’d sign.  It worked.  He relented and signed for a dude and noticed my presence and informed me that he’d have to sign my item since he signed for someone else.  I said “Please” and handed him my Spidey comic book and pen and got a very cool silver signature.  Love it.

There were two more panels going on that had folks that I wanted on DVD covers.  There were a couple guys from “Reno 911” that were supposed to be at a panel, but I did not see them, so it was off to the “The Last Push” panel that Lance Henriksen, Bishop from “Aliens”, was one of the cast members.  It’s a science fiction movie about a dude in space on his way back from a mission to Jupiter and he faces a lot of obstacles getting home, maybe even losing his sanity. 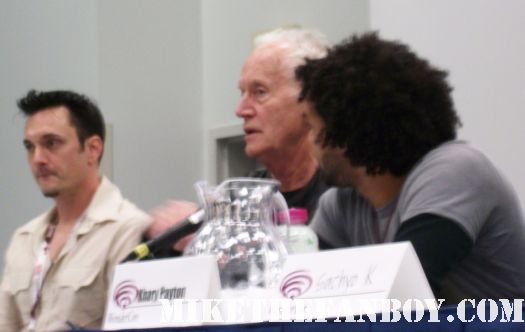 Looked interesting.   I hope it does well.  The cast and crew there were incredibly nice and enthusiastic.  Surprisingly, I was the only one that approached Lance afterwards for an autograph. Sometimes it’s nice not to have too much competition. I met him last may at a horror convention and he was epic cool and nice.  It was the same this time as well.  He happily signed my “Aliens” DVD cover and even took a picture with myself and one with my honey.  Had I noticed earlier, I would’ve asked him to sign his panel nameplate, which was still on the dais.  Mine now.

It was about 8pm and the main floor was closed.   All that was going on was a girl’s volleyball tournament and some cheerleading competition.  So it was a weekend of nerds in one giant hall and the other two full of girls that will never speak to them.  Welcome to the rest of your lives, guys.   That was it for WonderCon for me.  There wasn’t much left to experience since the main panels had limited access, if any, to the small amount of stars that showed up.  I just didn’t have another day in me of dealing with the traffic and amount of gas it would cost me so I stayed home on Sunday with the honey before heading to a Q & A with Malcolm McDowell in Santa Monica.  I hoped to keep riding my mini wave of success.  That’s another guest column though.  Until next time, stay the hell out of my way.  Peace!