Home / Big Mike • Fanboying! • The Lovely Erica / Big Mike Goes Where No Other Collector Has Gone Before… Well… Okay Maybe Not But He Does Get To Meet Anton Yelchin and Felicity Jones! That’s Something Right?

“Space, the final frontier… These are the voyages of autograph collector’s everywhere… To get everything in their collection signed, to find new things to get signed, and to never ever finish getting more crap to get a full cast of 20 to complete.”

Wow… That was meant to be a joke, but now seems like a sad prophecy of my life… DAMMIT! LOL… A Star Trek reference gone bad! LOL… Ah well… What can you do right? Huh… Today Big Mike is out and about (and no for those of you reading I am not Big Mike, I’m Mike The Fanboy and I don’t talk about myself in third person… This stems from a conversation I had at work last week but I digress…) So, Big Mike… See totally different Mike… I might have to change that brother… Anyway, Big Mike is out and about for Star Trek star Anton Yelchin. Anton is promoting his new movie “Like Crazy” and is doing a Q and A in Santa Monica. Also on the bill is Felicity Jones his co-star.

Big Mike picked up a few Chekhov figures and needs to complete his set! Who doesn’t right! Check out his full recap of the night, and thanks to The Lovely Erica for providing the pics!

It’s a nice SoCal fall night and I’m heading downtown to help my honey get her number one autograph get, Sarah Michelle Gellar. Her show, “Ringer”, is set to wrap for the evening at 10pm. I’ve never tried for an autograph at a set before and don’t know what to expect. This was sort of a last minute decision. I had originally planned to go to a Q&A for “Like Crazy” because I missed the one being held this past Saturday evening and I needed Anton Yelchin on my two Chekov “Star Trek” figures. I’ve done quite well getting those suckers signed in the last few years. I got Chris Pine at a play he was doing a couple summers ago near UCLA before he started to get more difficult to obtain, like a Sarah Michelle Gellar autograph. I also got John Cho, Simon Pegg, and Karl Urban at various appearances around L.A. over the last twelve months. Now I guess I’ve got six weeks to get Zachary Quinto, Zoe Saldana, and Eric Bana to complete the set by the end of the year. Otherwise, I have twelve months to get the rest signed by the end of next year. I’m easy with goals.

Anyhoo, I’m almost downtown when I get the call from my sad honey telling me to head back to Santa Monica to try to get Anton because Sarah left for the day a couple of hours ago. Bummed! Will she ever get Sarah? I hope. The easy part is she only needs her on fifty-five thousand items, but will settle for a few. No problem. We’ve only encountered her once in four years and we weren’t expecting her, so we had nothing. Yay. So, I turn around and head back to where I pretty much ended my workday and arrive at the location at 7:30pm. I only see one other collector there and we talk aboot our experiences at the Comikaze Convention this past weekend. After aboot twenty minutes, the lovely Erica and Scotty arrive. I love reunions. It gives others a chance to realize how much they’ve probably missed me.

This brings a total of four collectors so far, and now two more arrive. Anton is notoriously nice to his fans, so hopefully this will go over well. I haven’t scored at this location all year and it is time to put that horrendous streak to an end. I’d like to get my two figures signed on the way in so I can head home and figure out where I’m going to actually put them since I ran out of room about a year ago. One of the fellow graphers told me he signed on the way in on Saturday night so there is hope. It’s about 8:30pm and there are seven of us graphers with a few smokers sharing their future cancer with us. Not a huge deal, but I still wish they’d die and leave us alone. 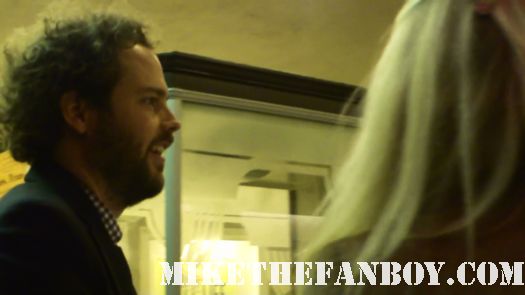 About 8:40pm a Lincoln pulls up and we all get our stuff primed and ready. It is the director and I don’t have a figure of him. Okay, false alarm. After some photographer rudely asks me to move from my spot almost off the curb I oblige because it would send a bad message to put my foot up his arse. (What happened to saying “Please” in this town?) It is at this time I notice across the street that someone that looks like Anton is parallel parking and taking forever to double check the parking meter. Now there are about thirteen people hanging around, not including the inquisitive older lady who was passing by walking her dog. She stops and asks what’s going on. Those are my favorites. Erica obliges her and tells her the director of the movie is here, as he is still out talking with the staff. I notice she has a coffee cup in one had and a healthy dose of booze on her breath. A brief check of the cup confirms the liquid in it is probably not coffee. The dog-walker looks on the marquee and notices the evening’s info in big block letters and starts talking aloud because the world needs more people who read signs out loud whether anyone is in earshot or not.

“Anton Yelchin. Hi, Anton. Hi, Anton”, she says to the director. Great, she’s sticking around and taking up space with her dog and her weird. Doesn’t she realize we’re trying to get autographs? Anton is just a few meters away taking a few pics of the marquee for his own keepsake and approaching the venue as the rest of the graphers convene upon him. 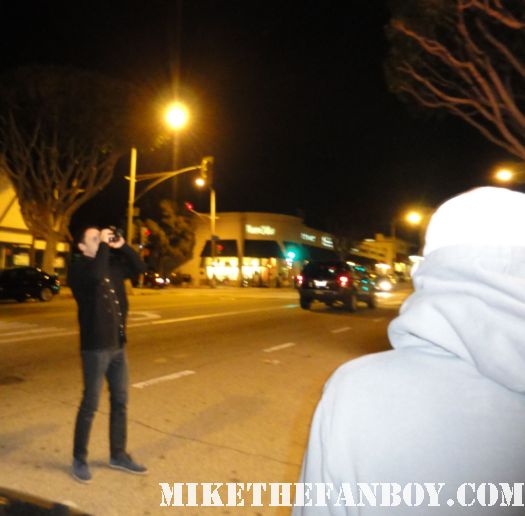 He hands his camera off and starts signing for us. “Sweet.” It’s not too big a commotion and the people who have waited the least amount of time get to him first. That always happens when I’m around, but what can you do? 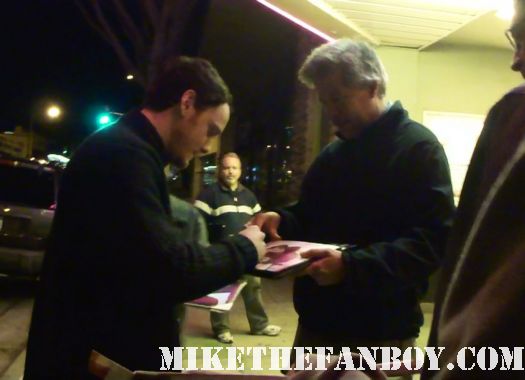 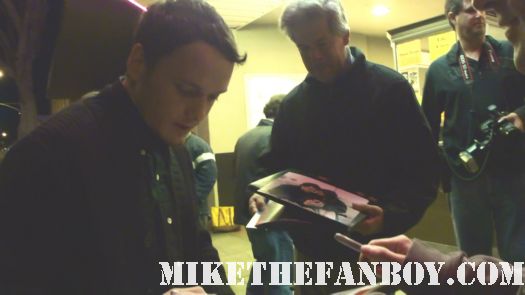 I patiently wait for him to get everyone because I want to get my figures signed in silver, which a lot of people dread. (Figures usually look better in silver–sue me.) His people comment positively on my figures and tell him its aboot time to move on but I manage to get him on both the larger figure and smaller figure, which he points out he doesn’t have yet. Had I known I would’ve been happy to have brought an extra. (I should’ve tried harder to make it out to the Saturday Q&A. Oh, well.) 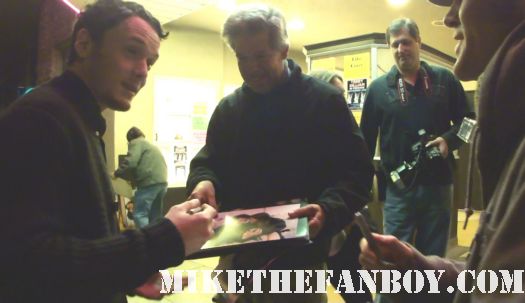 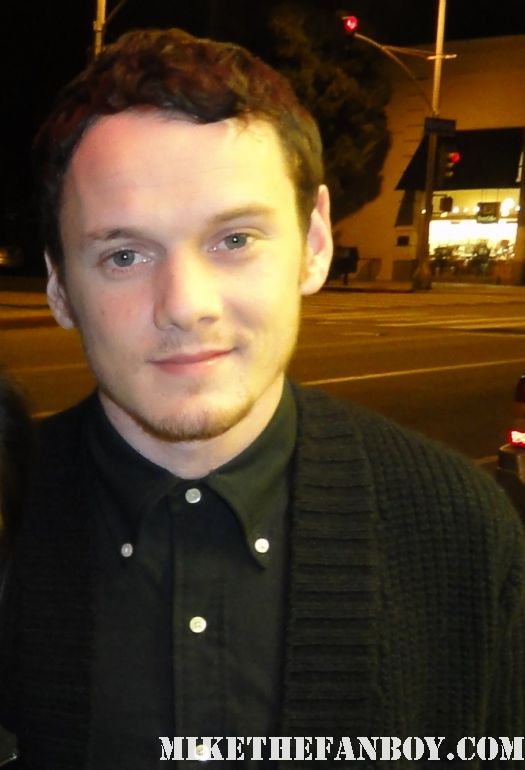 He signs the large figure on the Star Trek insignia in the lower left corner, (Damn, I should’ve asked him to sign across the middle of the figure), and he signs the smaller one just below the center. I guess I can’t complain. I am very happy to have them signed. Thankfully, I always remember to say “Thank You” loud enough. I have a hard time getting my voice up when I’m asking a celebrity for anything. I’ve lost track of weird dog walking lady and now I just stand back and watch as Erica gets her pic with Anton and his costar, Felicity Jones, has arrived. I have nothing for her and I wish I did. She is quite the cutie-pie. 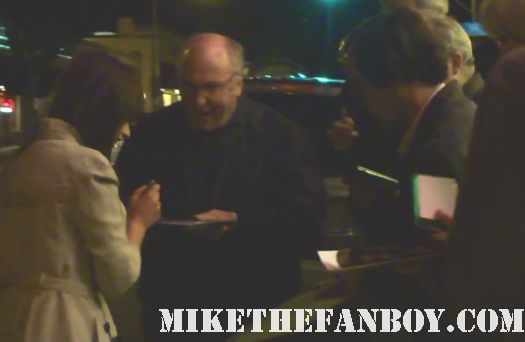 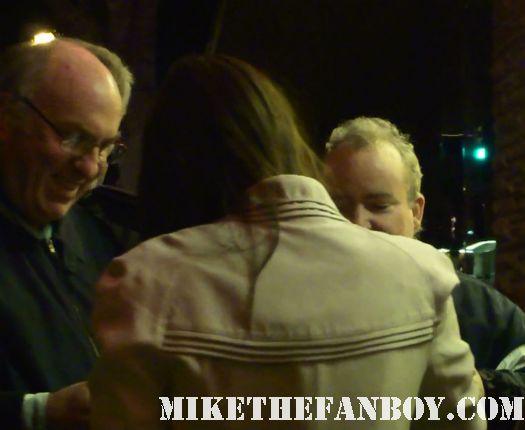 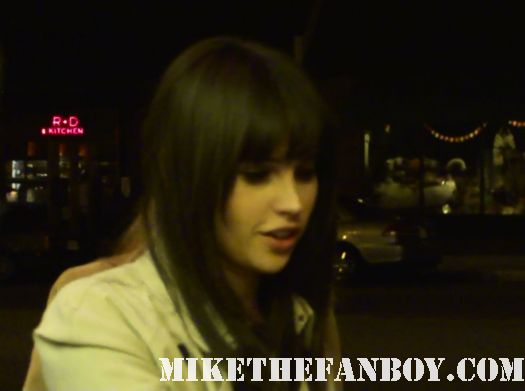 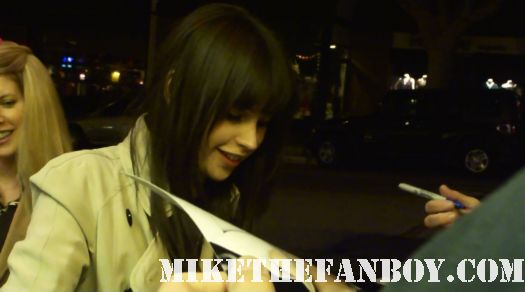 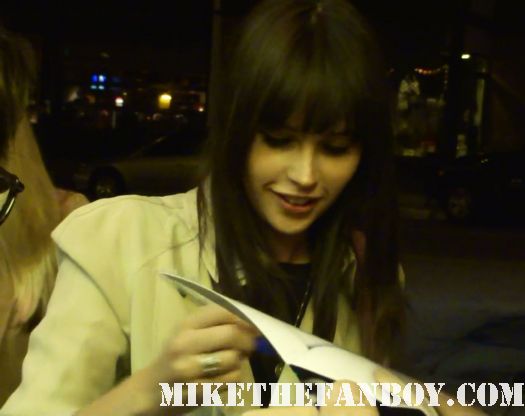 She signs for everyone and takes a few pics before Scotty, Erica and I head off in our own directions. Nice to see them again. There are very few cordial people in this hobby (horrible sad addiction), but they are a couple of the nice ones. About half a block away I see dog-walking lady again and she asks, “We’re you at that movie? No? Okay.” “Okay”, I say, since she’s kind enough to answer for me. I’m not great at conversation anyway. Did I mention she was kinda weird? 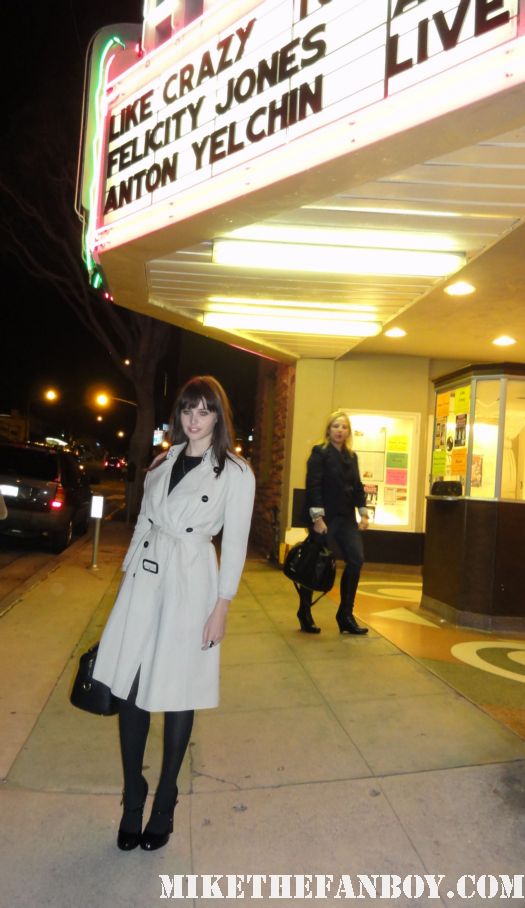 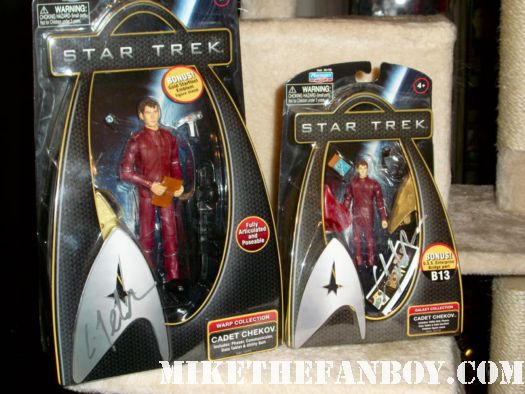