Home / Big Mike • RIP / Big Mike Remembers Meeting Robin Williams One Fateful Day And Looks Back On The Life Of A Comedy Genius!

You know, I’m still not over the passing of comedy legend Robin Williams, I have to tell you people are still calling me and talking about. I think the shock is surreal.

Big Mike wrote a wonderful recap of the time he met Robin and not only is it a moving tribute but it shows how thankful, kind and generous Robin was to his fans. It’s just so sad to lose someone like that.

I’m having my own Robin Williams movie marathon this week and I invite you to do the same. I started with Dead Poets Society and then moved on to Jumanji. If you have any memories of Robin, his work, or anything share them in the comments.

All I ever wanted to do was make the world laugh for a living. One guy who got that right to the nth degree was our beloved genius Icon, Robin Williams. We lost him to suicide at the age of 63. The very man who was always the funniest in the room no matter where he was lost to the demons he couldn’t face anymore.

It’s heartbreaking. It still hurts like I lost a family member and I only had the honor to briefly meet him once. It was at a talk show appearance in Hollywood five years ago and there were no barricades up at the time we were there, which was unusual. There was a fair amount of fans there and when Robin arrived he came right over to us.

It was a very chill moment. He went down the line signing and taking pictures with whomever wanted one. No one crowded him because they didn’t have to. He was coming to each and every one of us without hesitation. I was too star-struck to ask for a picture but I did muster up the courage to ask him to sign my “Good Will Hunting” poster and a baseball.

“Of course, because of all my years with the Yankees”, he said.

I laughed and he moved on and my honey asked why I didn’t ask for a picture. I don’t normally ask for one because I usually forget because I’m so happy I might’ve gotten an item signed. I was just too shy and nervous at this particular moment, and I didn’t even need to be at all. Security started to pull him inside and a couple of people were still asking for pictures, which he happily obliged. My awesome wife then asked him if he wouldn’t mind taking one with her husband and he came right back to me and I got to document one of the coolest experiences of my life. 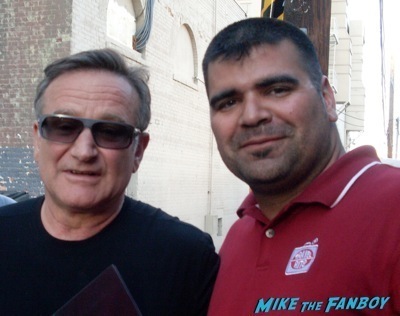 I love that picture. I love that man. Next to love, laughter is one of the greatest gifts in life. Robin made people laugh almost effortlessly. When he died he made the world cry. I don’t fully understand the pain and depression he was going through. I know depression weighs you down and does its damnedest to fight hope and keep you from seeing that light at the end of the tunnel. And if you ever find yourself in that pit of despair, find someone to talk to. Anyone. Depression will do anything to convince you that you’re alone, but you’re not. Just don’t give up. You never know what the world is losing. On August 11th, 2014, we lost more than a genius, a friend or an Icon, we lost a Gift. Thanks for all the laughs, Robin. You will never be forgotten.