Home / Fanboying! • Stars of the 1980's and 1990's / Becoming A Hooker! Fighting Rats! Seeing Power Rangers! All In The Name Of Meeting Alex Winter! AKA Bill S. Preston Esquire!

There are times in any Fanboy’s life, when you have to question your own existence. To really take a hard look at your life. A Few weeks back, I heard that Alex Winter was going to be doing a Freaked reunion.

Jack was supposed to come with me but at the last minute he bailed… Grrr.. So I grabbed the Fanboy hotline… I was dissed by pretty much everyone.

Ace, “That sounds horrible… I’m tired from only having slept 14 hours today and shopping for a new hoodie.”

Scotty, “I can’t, I’m watching another movie with a mysterious friend that I’ve never mentioned in the 10 years I’ve known you.”

Jack, “I’ve got the sniffles.”

Billy, “Movies… I don’t… Wha? I’m trying to finally focus my camera and practice doing selfies in the mirror.”

So… I said you know what. I’m not going to be deterred! I’m going to see this movie! I headed down and then… The line stretched down the block… Facepalm… I’m alone on the cold streets of Los Angeles… And the screening sold out. Damn life and society! 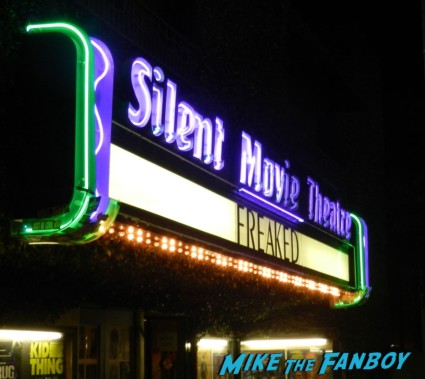 What to do… So, I look at my phone, okay, it’s midnight ish, I can probably still meet Alex Winter when he arrives… Logical thinking right?

So, after debating about what to do, I called Ace… I was interrupting his busy night of filing his 4×6 index cards…. Which is why he couldn’t come with me… Nice… Friendship.

Anyway, I realized my phone was dying… I couldn’t even check my email. Why Lord why!

No one has shown up and I know that there was supposed to be a lot of people for the q and a. Grumble… This is not boding well. 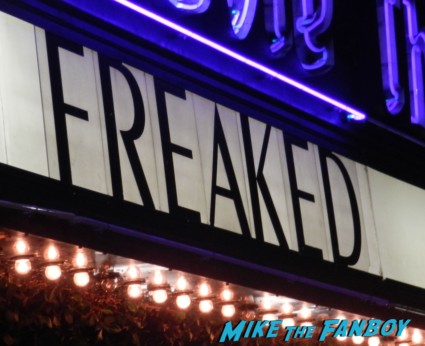 There is a hostel on the corner and strange foreign tourists keep staring at me like I’m a hooker. A hooker with a Bill and Ted cereal box, I don’t think that really fits… but you know any port in a storm.

There are two guys, that have literally circled me ten times, I’m doing the fake phone call and apparently, I’m using all my resources in improv and loudly yell “hi grandma.” It’s 2:00 a.m. and I’m talking to my grandma on the streets of Los Angeles. I know the “Johns” don’t realize this, but my grandma is in Michigan so that would be like 5:00 a.m. her time and neither one of us like getting up early. That’s a lot of backstory.

A rat just ran across the street. I can’t make that shit up.

There are hookers, rats and fake phone calls…. 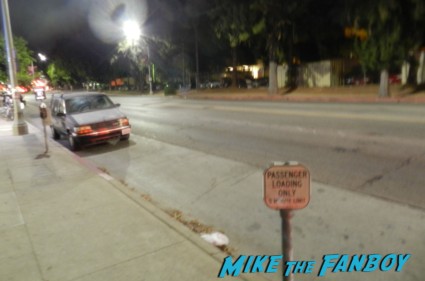 Here is where I start to question my entire way of being… Who am I? What is life? And what brought me to the point where I’m clutching a Bill and Ted’s Excellent Adventure cereal box at 2:00 a.m. on the streets of Los Angeles, getting propositioned, fighting rats and making fake phone calls.

What has happened to me. I have a respectable job, a website with a decent following (I love you guys) and yet… these deep dark thoughts are criss crossing my brain. I’m seeing homeless men and women huddling for warmth around fires to my left. Did I suddenly wander into Beirut? What is going on?

So, now I’m like… That’s it. I’m going to the car. If worse comes to worse, I will drive back. Of course I had to park a mile away and now I’m waking through the streets of random drunk people puking outside of bars and people really baffled by the fact that I do not indeed have a “light.”

Fake phone call time… “Grandma? Are you there?”

Ironically, it’s so cold, this is the time that Ace would need his patented hoodie.

I get to my car, turn on the heater and defrost. I drive back to the theater and wouldn’t you know… The q and a is letting out. Son of a fuck-ton bitch.

And now I’m back. The couple that was circling me before is back as well. The dude has the tightest pants in the world and now he’s going to try and make conversation. I see it happening.

Done. It’s nice to know, if I needed extra cash, even with an extra 15 pounds I can probably make my mortgage payment! SCORE!

People are coming out with signed DVD’s. It’s killing me. The theater people are at the door so I can’t sneak in. I’m wanting to murder seven people. I’m put them in three different orders, alphabetically, in order of hate, and which ones I can get away with.

The mind is a crazy thing.

I’m getting offered drugs by some West German tourists.. Either that or they want to buy drugs. I would have a great fucking career as a drug dealing hooker prostitute. Seriously, I would incorporate, and run this fucking town! The streets are mine bitches. You wanna roll with the fanboy, I’ve got a Bill and Ted’s Cereal from 1988 and I’m not afraid to eat that shit. YEAH! That’s how I fucking roll… Mother fuckers.

Just when I was about to totally lose it. (I really believe I saw the Red Power Ranger in the street. I’m not lying. that’s how tired I am. The Power Rangers came to life in front of my eyes)

I went up to him and asked him if he wouldn’t mind signing. At this point, I couldn’t even form words, I’m sure if came out, “You, please… Sign.” God, what has happened to my life.

Alex was clearly super nice, staying late to greet everyone inside, signing my stuff, I did take a photo of him and a couple other guys, I’m shocked I could focus the camera to be honest. 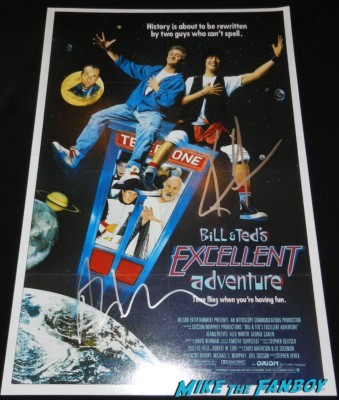 And my cereal box and two mini posters were now signed… I’m praying to God, that I don’t see any more Power Rangers on the way home. I need to regain at least a touch of my sanity and get a phone charger… Oh wait Erica got me one for my birthday! I just didn’t bring it! 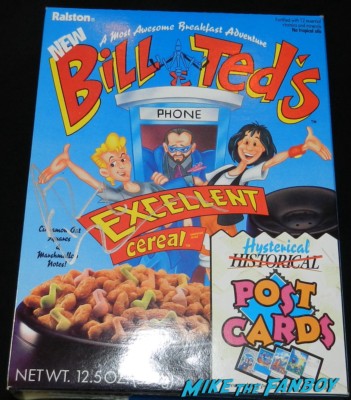 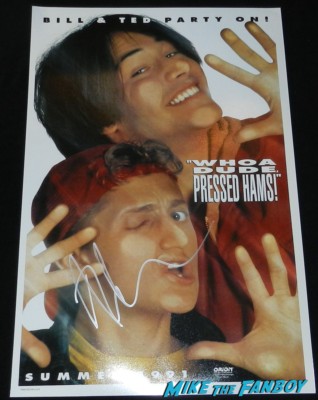