Home / NEWS / Bill Murray Weighs In On The Ghostbusters All Female Reboot And Reveals His Dream Cast!

I ain’t afraid of no ghosts!

Yep, Ghostbusters talk is back, the all female Ghostbuster sequel has picked up steam today with talk that Bill Murray has weighed in with his opinion on the project.

Bill Murray was at TIFF and talked to the Toronto Star about the project while promoting his latest film, St. Vincent.

“Melissa would be a spectacular Ghostbuster,” he says, “And Kristen Wiig is so funny — God, she’s funny!”

Bill Murray also weighed in about Emma Stone and Linda Cardellini, who was Velma in Scooby Doo and had an affair with Jon Hamm.

Hmmmmm, I think it’s kind of interesting actually. I hate the idea of trying to reboot the franchise especially after the film community lost Harold Ramis earlier this year.

Melissa McCarthy, also at Toronto for the festival said this about the project.

“Oh, my God, that’s daunting. That’s taking on a legend, a legendary movie. But I would do anything with those ladies, anything at all.” 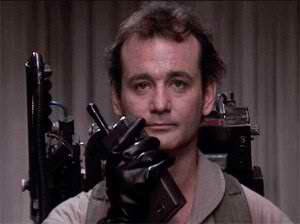 Still, not sure I love the idea of this project, but Bill Murray is a good source and seems to be giving the project his endorsement… So…