Man, I’ll tell you; those full days of fanboying can be exhausting. I’m getting too old for this shit! LOL… Any time you can quote Lethal Weapon is a good day. Anyway, while I’m here hanging with Mr. Theo Shag-a-popalis, Billy is out and about on the cold streets of… Well… Los Angeles… And Hollywood… And the grassy knoll of The Grove… Wait a minute!

LOL… Billy is heading out for the Kids of the Hunger Games, Hope Solo and Ashley Greene from the Twilight saga.

Welcome back to Billy Beer’s Barstool. A tasty beverage sounds great as always, I just don’t know what to eat. I only HOPE that at the TWILIGHT of the night I’ll be able to find something that would satisfy my HUNGER………games. Today I’m at my favorite restaurant Chili’s, and decide to order the Triple Dipper, and to my delight, it all tastes wonderful!

Well today is the last day before I start my new job (working for a microbrewery, go figure 🙂 ) So I wanted to make sure I take advantage of my fanboying freedom. For a while I’ve had this day circled cause Hope Solo, the goalie for the USA Women’s Gold Medal winning soccer team, was having a book signing at The Grove. She was also on Dancing With the Stars. Ashley Greene was also going to be in Hollywood today. I’ve been working on a Twilight Comic Con poster now for over a year, and I still need her on it. I look up to see who’s going to be on Extra at The Grove, and find out they have the cast of Hunger Games. This could be anyone. I have a poster from a book signing that still needs a lot of the cast on it. I’ll just bring it along just in case.

I get to The Grove around 8AM. The bookstore doesn’t open until 9, but I want to get a gold wrist band so I don’t have to wait in line forever! There are about 15 people in line in front of me. This should work. I look at the Extra sign they have, and it says “Kids of The Hunger Games”. I’m pretty sure that means no Jennifer, Liam, or Josh. Oh well. They finally open the doors and I get my three books. I have friends who I coached with back in Michigan, and I wanted to get them signed copies too. The press release said she will personalize. I look around and don’t really see anything set up yet, so I go to the Farmer’s Market and get some breakfast. There are not many things better than eating breakfast at The Grove when it’s not busy, and listening to them play Sinatra.

I make my way out, and see that Extra has now set up. It’s not very deep, and I make it to the second row. I’m there for a minute when someone recognized me from Mike the Fanboy. LOL! There’s a first! (Here is where there’s an editors note about how famous Mike the Fanboy people are)

(Editor’s Note: The staff and writers of Mike The Fanboy are superstars… In their own minds, lol… I love it when people who read the site come up to me or any of the other writers! That’s frakkin’ awesome! M-)

Time for the talent to arrive. There’s Mario 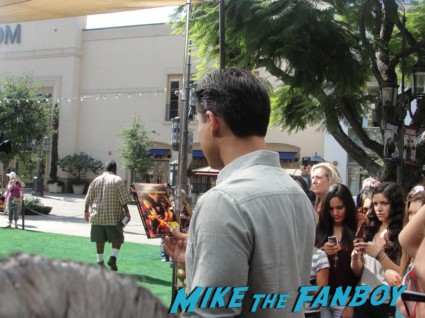 and here comes the cast. We’ve got Amandla Stenberg (Rue), Alexander Ludwig (Cato), Jack Quaid (Marvel), and Dayo Okeniyi (Thresh). I need Jack and Dayo on my poster. It’s a pretty quick interview. I’ve only been to one of these before, it was Shania Twain. It seemed like she was there forever. I think the interview was done in 5-10 minutes. 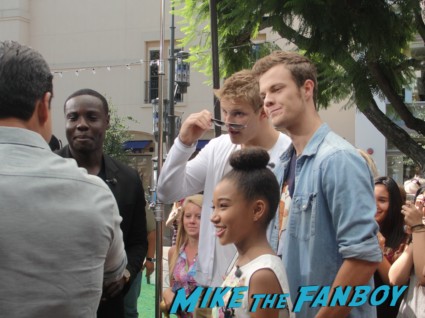 Then they started passing out Hunger Game DVD’s. Dayo reaches over a girl and hands one right to me. YAY! I was actually going to buy it this week. Now I’ve heard it’s been getting harder to get signatures at The Grove, but everything was quite calm today. All four of them started signing and taking pictures with the fans. I’m able to get my poster signed and I was ready to be on my way when BOOM! It’s Maria! Nobody else really sees her cause they are all focused on the cast members. I asked her how she enjoyed Summer Slam and asked for ANOTHER picture. She said she enjoyed it and posed with me again. 🙂 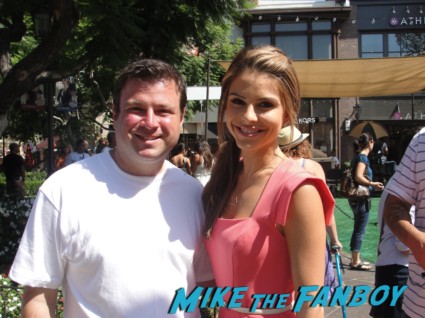 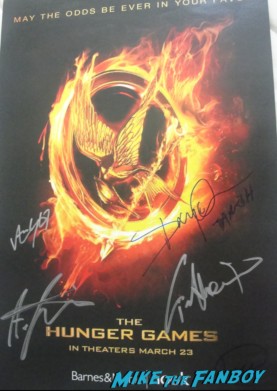 Time to go back home for the evening activities. MONTAGE!

I get to the bookstore around 5:30 so I can get one of the first spots in line. I only have about 15-30 minutes to get from The Grove to Hollywood, so the quicker I can get my books signed the better. I sit down and read my Nook for about an hour. Finally it’s game time. There are a million little girls running around in soccer uniforms. I wish I could have done something cool like that for my players when I coached. They are all super excited. As soon as she gets into viewing range, there’s a chorus of high pitched screams. There she is. She dyed her hair back to black, but still looked really good. 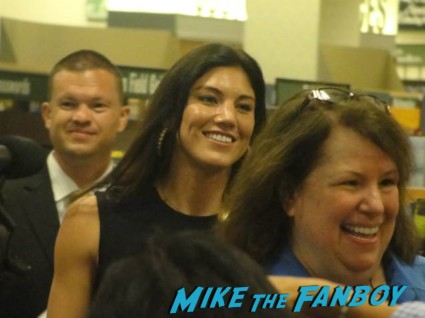 First they have a whole soccer team jump the line and take pictures with her. At first I was wondering what the heck was going on. Then I found out that it was the owner’s daughter’s soccer team. That’s fine, I’m cool with that. Then I find out she’s not personalizing because there are soooo many people. Shoot, well I’m sure they will still love a signed book. I get up there with my 1994 Men’s World Cup Jersey, and USA soccer scarf. She says hi, and thanks me for coming. I tell her I pulled out my old school jersey for her. She laughs and asks if there’s a name on it. Nope, but she still likes it. I ask her if she baited the Japanese player into shooting far post on her last HUGE say in the Olympics, and she smiled and had that look like “this guy knows what he’s talking about” and said “Yup”. We talked a little more soccer, and then it was my time to go. One thing I did find interesting and liked, was she had 2 versions of her book, a kid friendly one, and the TMZ headline one. 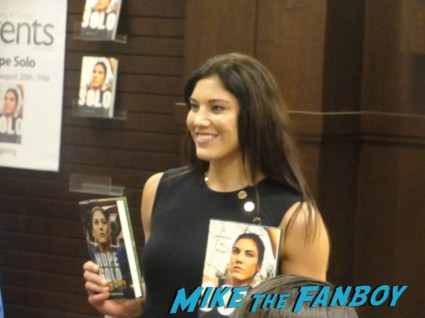 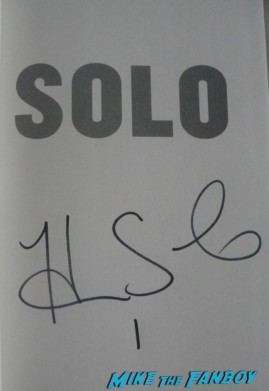 Now it’s time to get back to Hollywood. I get there as fast as I can. There are enough people there that I’m second row, but not a lot of the crazies are there today. Tom Arnold is first to leave, but nobody really calls him over. I got him at the Hit & Run Premiere, so I really wasn’t making much of an effort. About 10 minutes later, Ashley comes out. Now I’ve heard she been getting harder lately, and she doesn’t really like to sign. I have my Twilight poster, and for some reason while I was at 7-11, got a copy of Nylon Magazine which she was on the cover of. We start screaming for her. It looks like she coming over, but then stops at the door. She’s still looking over, so it looks good. Finally she makes her way down. She’s wearing a beautiful red dress, and looks amazing. She starts off on the other end and starts making her way down. 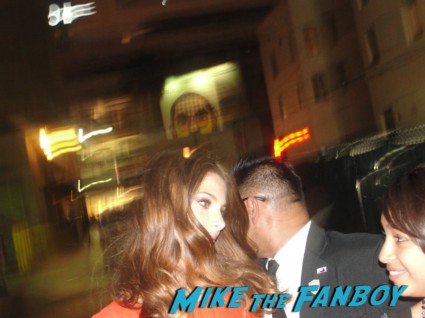 Her publicist is insisting on only 1 each, but I see people getting more than one. She’s a little bit to my left when I hear her say “everything is Maxim Magazine” I reach over someone and tell her I have the new Nylon Magazine. She grabs it immediately, and signs it. 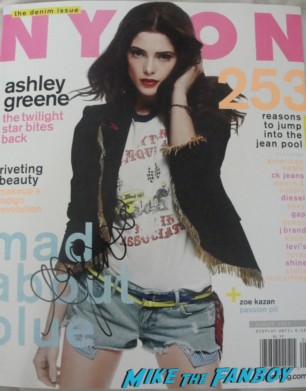 I have my poster out too on the other side, when I hear her publicist tell her not to sign my poster because I already got one. CRAP! She finishes signing and then starts taking pictures with people. I get 2 photos with her, BOTH fails! 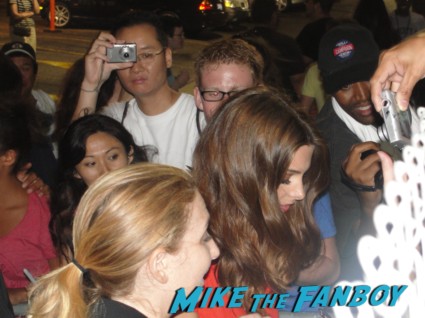 She continues down the line for photo opps. We call her back to try and get someone else a photo. She comes over and does it, and when she does, I hold out my poster again with a pen and ask if she could sign it. She does, and then moves on.

YES! My day is complete. Now that my Hunger is satisfied, it’s time for a beverage, it’s Happy Hour somewhere! 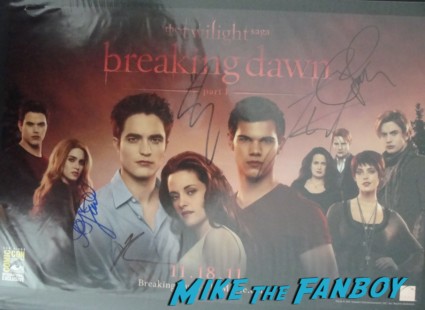