This is a MTF First… That’s right… Billy Beer is out and about Fanboying a sporting event! I’m sorry… What? Sports… Here? On MTF? I don’t… I don’t even know… What to say, what to say… And clearly you can’t call wrestling a sport so it truly is a first I would say.

Billy Beer went off to the MLS Cup Final and met a bunch of people. Honestly, I don’t know who the heck anyone is, but God Bless Billy Beer because he looks so happy out and about with them!

Ole, Ole Ole Ole! Ole! Ole! That’s right fanboys and fangirls, it’s time for another Mike the Fanboy first! Today at Billy Beer’s Barstool, we’re not just watching sports on the TV, we’re taking a party bus and going to it LIVE! That’s right Mike the Fanboy is getting his first sporting event fanboy blog! I’ve told Mike I was going to do this one of these days, and although Travo would consider WWE wrestling a sport, it’s not been made an Olympic sport yet. Today we are on our way to the MLS Cup Final, to watch the LA Galaxy and the Houston Dynamos battle it out for the Cup, and watch David Beckham play his final game in the MLS. While doing so, meeting some of MLS’s best past and present players.

This is an event I was lucky enough to go to last year too. A friend of mine works for a company called Upper Deck (I buy all their products and you should too) that gets free tickets cause they sponsor the MLS. When I got the call asking if I wanted to go again this year, I didn’t even hesitate. Also knowing it was Beckham’s last game, it was even a bigger deal. I left my house pretty early so I could help out fellow fanboys with some posters, and was on my way. After parking, I went into their little village they set up with all the sponsors. Each booth had some sort of game or giveaway. That’s when I started to notice there were players from other teams there signing autographs. BONUS!

I went into the first tent, where they had Graham Zusi signing and taking pictures. 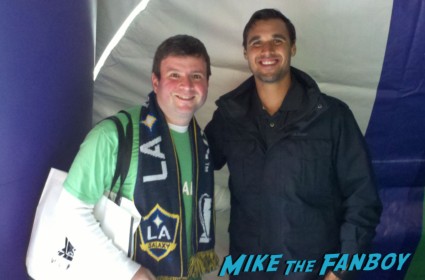 On the other side of the tent, they had a thing where they took a picture of you and it looked like you were on the field.

After that, I made my way around. Some booths were giving out scarfs (they’re a big deal at soccer games), others had T-Shirts, while others were giving out soccer cards. Then I saw something really cool! They had the Championship Cup there that you could take a picture with. Well Of Course!! 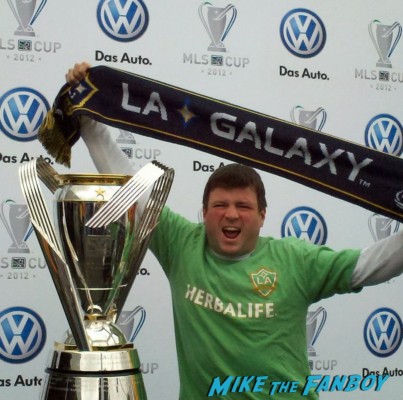 I went on to the next booth that had people signing. It was Jimmy Nielsen the top goalie in the league. Again, he was nice, signed a photo and took a picture. I wish all top athletes were so nice. 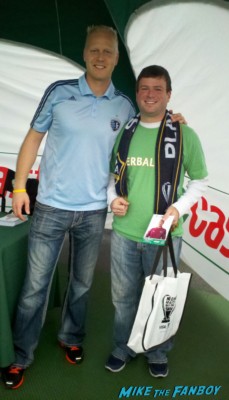 Then I made my way to the Home Depot booth. They had some of the old school MLS players coming over to sign. The first one was Alejandro Moreno. He was really nice. They had something hooked up that you got a picture printed off with the player. It didn’t really look like good quality, so I had them take some pictures with my phone too. 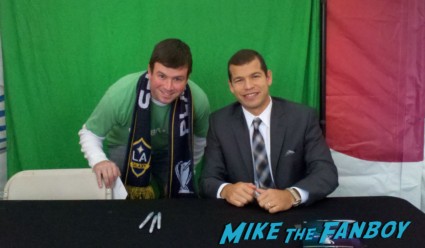 The second player at the Home Depot booth was Alexi Lalas. Alexi is a US soccer legend. He now works for ESPN. I was super excited to meet him, I tell him I’m fellow Michigander. (Wow, spellcheck didn’t fix Michigander, it must be a real word), and tell him I was at the World Cup when it was at the D. Then I asked him if he’s still playing music, and that’s when his eyes lit up. You can tell that’s something he really likes to do. We talk for a couple of more seconds, and then I’m on my way. 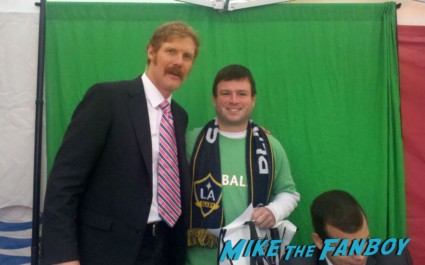 My last stop is to meet Tony Meola. He too is a US soccer legand. He was the goalie when the US finally started to become good again. He even tried out for the New York Jets as a place kicker. Just like all the other players, he was extremely nice and took pictures with everyone. 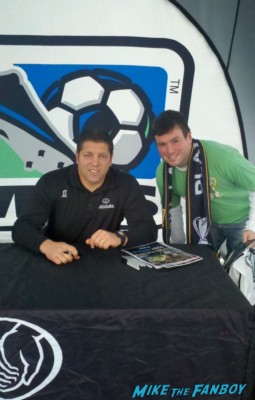 Now it’s time to go to the game. But not without a stop to the hospitality tent. My friend has some serious access, and got us in where they had free food and free drinks. FREE DRINKS!!! That’s even better than Happy Hour! I sit around and eat and drink while my friend rubs noses with the big wigs. NOW it’s time to get into the game. 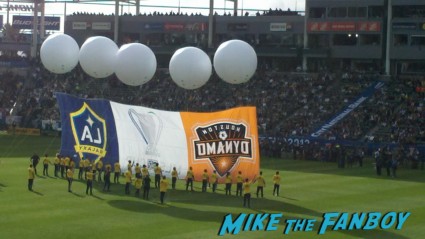 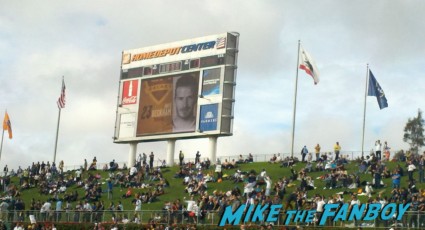 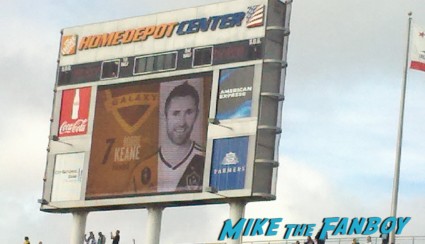 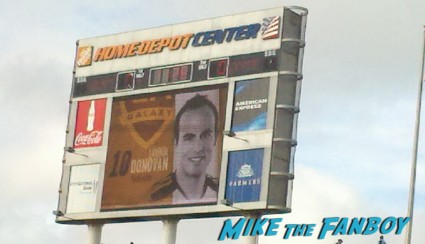 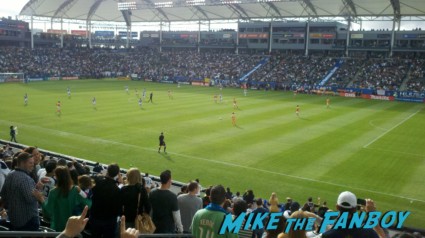 What started off as an overcast day, has turn into something nice. We sit down and get ready for the start, and here we go! The game starts off with both teams really feeling each other out. There’s an occasional break, but nothing serious. Then about 13 minutes in, the Galaxy get a great chance when Robbie Keane and Landon Donovan had a 2 on 1 break only to have Landon miss a totally wide open net. It was such a sure thing, the scoreboard even put a goal up for the Galaxy. UGH! 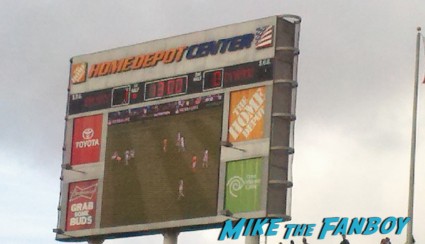 The next 20 minutes was back and forth. Then with 2 minutes left in the half, Houston ends up with a breakaway, and scores on a nice shot upper corner near post. This just doesn’t look to be our day.

The second half starts out with more of the same. The Galaxy were controlling a lot of the play, they just couldn’t score. FINALLY, about 15 minutes in, the ball is bouncing around in the penalty box, and a Galaxy player puts it in. 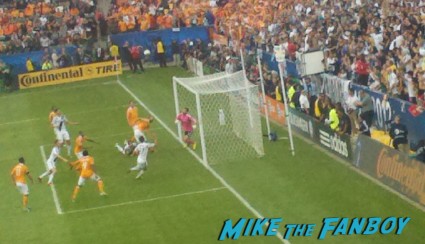 The crowd goes crazy. NO GOAL! AGH! Offsides. I’m telling you, we are not getting any breaks. The ball stay down on that side of the field, and finally off a direct kick, the ball is headed into the goal.

GOOOOOOOOOOOOOOOOOOOOOOOOAL! Now we got a new game. The pressure didn’t stop. Just a couple of minutes later the Galaxy put another one in the back of the net. NO GOAL! AGH! AGAIN! This is driving me crazy. 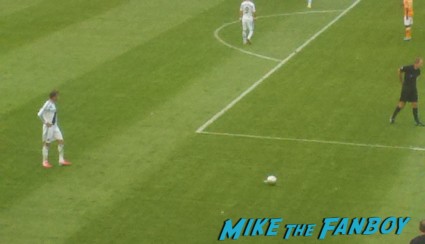 Then just minutes after that, a Houston player take down Robbie Keane in the penalty box. PK time. Landon doesn’t miss these, and he didn’t disappoint this time! Galaxy 2-1.

Tick Tock Tick Tock. Now it’s time for the waiting game. Can the Galaxy hold on. Houston has a few really good chances but just before the 90th minute, Houston is called for a penalty in the penalty box again. Now I was really hoping they would let Beckhan take the kick score a goal and ride off into the sunset, but Keane took the ball and made his way up there to score and make this game 3-1. Now the crowd knows they have this won. Everyone starts to stand a cheer. With seconds left they substitute out Beckhan so the fans can give him one more cheer. Whistle Blows, GAME OVER! 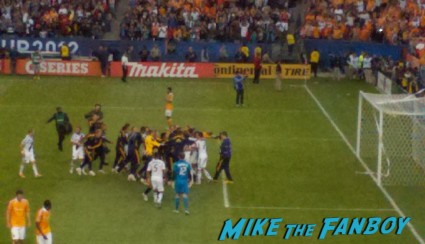 The crowd goes crazy as do the players. I run to the gift stands, and get my 2012 MLS Cup Champions scarf and then watch the celebration. 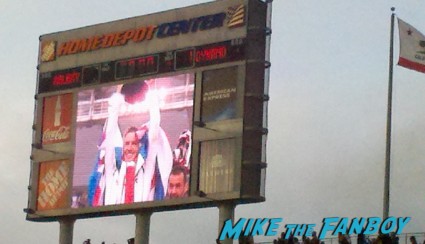 What a great game! Well, fanboys and girls, it’s Happy Hour somewhere, but I’m going back for the free drinks! Next time. 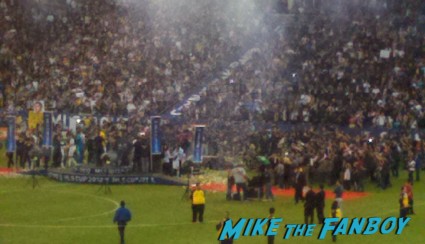