I’m a little jealous of Billy on this one. The Mirror, Mirror premiere was rained out and so I missed another Julia Roberts opportunity. You can never have too many opportunities with Ms. Roberts! But also on the list was Armie Hammer! Armie is the new Lone Ranger to Johnny Depp’s Tonto…

Billy Beer got the jump start on me for this one! He already got Johnny Depp! Doh! So, when Armie Hammer taped an appearance at a talk show… Well… Billy had to go! Check out his recap after the jump!

Welcome back to Billy Beer’s Barstool. Today at the bar, we’re hoping to meet up with one of those celebs that have been eluding me for a while, Mr. Armie Hammer. Now I heard he’s had an easy upbringing. C.B. tells me he is the son of a multi-millionaire. I can only assume he’s talking about MC Hammer, so let’s “Turn this Mutha Out”

Now it’s not like Armie is on the top of my get list, but he is starting to build himself a good resume. The first time I missed him was at the J Edger Premiere. The only person that crossed the street that day was Leo. Next was the Mirror Mirror Premiere. I didn’t even go to that cause it was raining all day. Today I have a short time period before I go to work, hopefully he can finish off my Lone Ranger combo shot with Johnny Depp, and a Mirror Mirror shot that I’ve been stuck with for a while. Time to fanboy!

C.B. is already calling me wondering where I’m at. When I get there, I’m still early, and we are the only ones there. I hope he signs on the way in, cause if he doesn’t; I have to leave and go to work. After much talk about Batman and Paul Walker, C.B. wants to see the pictures I have. I tell him “U Can’t Touch This”! He doesn’t always respect other people’s photos. He did notice we are both trying to finish off our Lone Ranger pictures. Finally, here comes an SUV, “Here Comes the Hammer”. It’s time to “Pray” that he stops. Please “Do Not Pass Me By” Armie! And he doesn’t disappoint.

(Editor’s Note: Mike The Fanboy Inc. Does Not Endorse or Condone The Use Of Any MC Hammer Song Titles or Quotes. M-)

His SUV stops, and instead of rolling down, he just gets out to greet us. Well, “Let’s Get It Started”. C.B. is first to get his stuff signed. He has a vinyl of The Social Network. Armie is really impressed with this. Then he shows him The Lone Ranger picture. 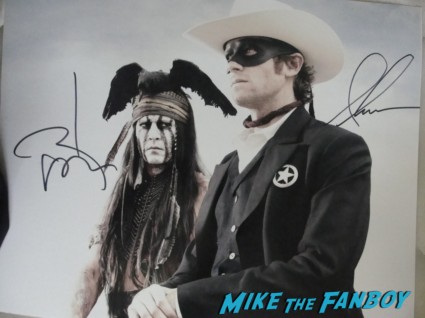 He was like “Wow! You already got Johnny on this!” Now it was on to my pictures. Why? Cause he’s “Too Legit to Quit” He signs my Lone Ranger picture, then I bust out my Mirror Mirror picture. I apologized for having it, but told him I couldn’t get it done at the premiere, because it was rained out. He actually signed it, and then apologized for the movie itself. LMAO! 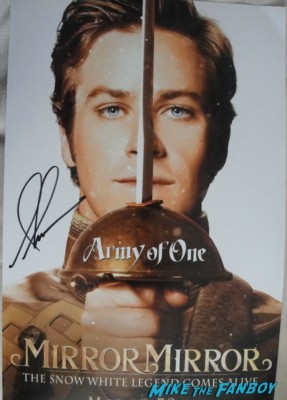 We then were able to get quick pictures with him before his people rushed him back into the SUV. Two things done in about 30 minutes or waiting, not too bad. Well off to work where instead of enjoying Happy Hour, I will be serving the spirits. Until next time 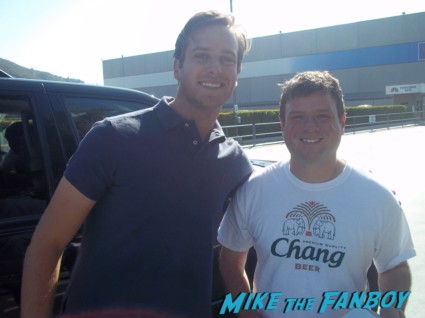