Suddenly Susan did a great article on the last Nuke The Fridge Con and now Billy Beer has decided to write about his experience’s as well. Billy loves his wrestlers, let me tell you, he loves them! LOL…

He also was able to get a group photo with the Willy Wonka kids and more! It’s so funny to see how they’ve changed especially when they are forever in my mind from the classic film!

Welcome back to Billy Beer’s Barstool. After hanging out with Suddenly Susan at comic con, I’ve enjoyed reading her wonderful article on Mike The Fanboy. So when I saw her article about Nuke the Fridge and I saw I was called out to give the Male point of view of the event. I felt it’s my duty to, how should I put this……..talk about all the Playboy models and Wrestlers. And if there’s Wrestlers, you know who’s with me!!!! It’s my Drinking Buddy Wingman Travo! I really think Travo should start doing his own wrestling blog on this site (hint hint)! The stories he has! Anyway time to step away from the bar, and off to Frank and Sons to enjoy Nuke the Fridge.

We start off a little late today cause let’s just say Travo had a hard time getting up. Today Travo is looking to get WWE stars Demolition AKA Ax and Smash. They’re supposed to be wearing their face make-up today. I am there for the ladies 🙂 I have my choice of three. First and #1 on my list, Sara Jean Underwood (2007 Playmate of the Year, and star of Attack of the Show on G4). The other ladies there are WWE Diva and former Women’s Champion Kelly Kelly, and WWE Divas the Bella Twins. Kelly Kelly and the Twins both just recently left the WWE. I figured I would go for the girl/girls that looked hotter that day.

Nuke the Fridge is a pretty big deal for Frank and Sons. It actually got its name from an Indiana Jones movie when Indiana survived a nuke by hiding in a fridge. So when we got there, we knew parking would be tough, especially since Stan Lee was going to be there this year. Travo dropped me off while he parked. I went over to the autograph area, and it was crazy! Little did I know, most of the craziness was just for Stan Lee. That’s when I run into Suddenly Susan. We talk for a little bit. I can’t believe how early people got there for this. Travo finally gets there, and we make our game plan. Kelly Kelly is already there, and looking nice. I decide it’s going to be Sara Jean, and Kelly Kelly toady. I buy my pictures for each of them to sign. Time to get in one of those crazy lines! “are you here for Kelly Kelly?” Why yes I am. “step on up” WOW! No line. Kelly Kelly is nice. She’s always been on of my favorites when we go to Summer Slam Axxxess. I tell her I’m going to miss her on WWE, and she says it might not be permanent. She signs my photo and then takes a pic. 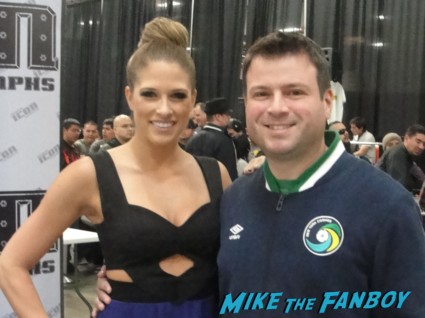 The Bella Twins are next to arrive. I already decided to get Kelly Kelly, so I just walk past them and take a few pictures. Guess which one just got a boob job! 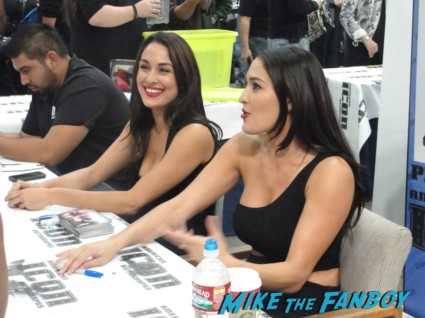 One down, now it’s Travo’s turn. After waiting a little bit and listening to a crazy wrestling fan yell every 2 minutes, here comes Demolition. Travis will usually buy an autograph ticket, and a photo op ticket, but they were asking quite a bit for both. That’s were a good Wingman comes in handy. When Travo gets up there, these guys were great. Travo has more information about wrestling in his head than I think his Encyclopedia has on its pages. He talks a little wresting with them, and then he has them sign his book. I think he could have gotten more autographs from them, but now it’s time to work our free picture magic. “TRAVO!” Now when you yell, people like to look over and see what they’re yelling at. The funny thing is, not only did they look over, they posed for me. Click 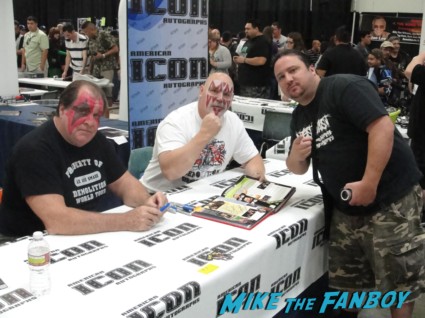 Sara Jean isn’t there yet, so now it’s time for the other reason Travo and I love to go to Frank and Sons…$1 TACOS! We take down about 4 each and go to get back to the lines. Who do we see? It’s DVD Dave! He’s waiting for Sara too! 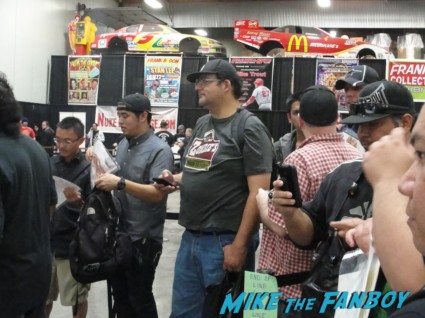 Travo runs into one of his Wrestling Fanboy friends. “Do you guys want a picture with the cast of Willy Wonka, it’s free” Um, Sure? “Here’s an extra ticket, they didn’t takemine” Travo and I get up there and decide to take the picture together. 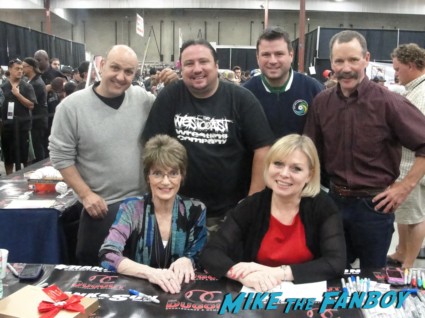 There are a bunch of celebs here now ready to $ign and take pictures with people. There’s Stan Lee who somehow posed like he was having a heart attack. I could probably sell this picture to TMZ! 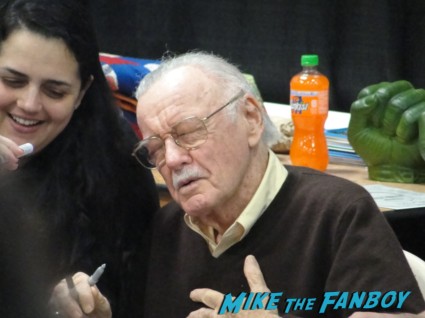 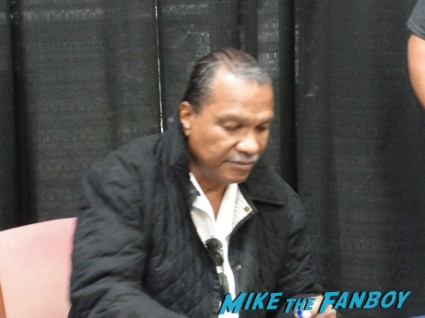 And the Birthday Boy, The Hulk Lou! 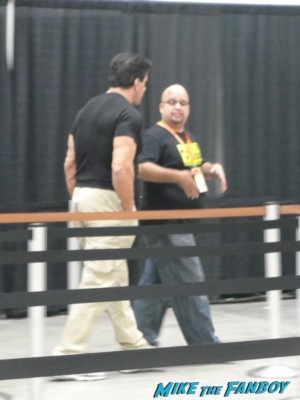 But now who I really wanted to see. Ms Sara Jean Underwood. I’ve been a fan of her for a while now, and it’s nice to see her doing mainstream stuff. The line is not too long, but we do have to wait a little bit. Sara is wearing what I would like to call a snug little dress, and is looking super cute. When I get up there, she tells me it’s nice to meet me. I tell her I’ve met her a couple of times, and the last time I met her G4 had her wearing a big Sumo outfit at Comic Con. She tells me how she wasn’t feeling good that day (of course, all the celebs do down there is party every night). I tell her I liked her “me in my place” spread in Esquire. She thanks me, and I think she’s actually surprised I wasn’t talking about her Playboy pictures. When it’s time for a picture, I tell her my friend told me to tell you to look sexy in the picture, like that would be hard to do. She laughs, and then poses. I would say it turned out quite nice. 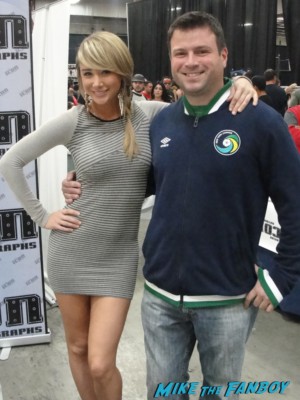 Well there’s your guys perspective of Nuke the Fridge. I hope you enjoyed it. It was great seeing some of the Fanboy family there. Time to go, it’s Happy Hour somewhere!