And here I wanted to throw another shrimp on the Barbie… Do people use that expression? Do they? Australia has given us some awesome actresses… One of them Ms. Naomi Watts is in the fabulous city of angels… First you see the ring and then you die!

That’s what I get when I leave a cup on the coffee table. It forms a ring and then I get killed. Sorry, was that a bad joke?

Anyway, Billy headed out to meet the King Kong star… Was she nice? Let’s check it out after the jump!

Good Day Mate!  Welcome back to Billy Beer’s Bar Stool.  Today we’re cracking open an oil can of Fosters while watching Rugby on the tube.  Fosters, Australian for hot actresses I want to get autographs from!  Today we are off to get Nicole Kidman’s bestie, the beautiful Naomi Watts.  Now I have tried for Naomi before.  The same place I tried for Armie Hammer, the J. Edgar Premiere. And as I stated before, Leo was the only one nice enough to cross.  So I was hoping for better results today.  I’ve been a fan since for what some people might call the wrong reasons, Mulholland Dr. (a road I never want to ride with C.B. on EVER again), and 21 Grams.  Let’s just say it must have been cold on the set for those movies.  🙂  Sorry, had to say it.

I meet up with C.B. to carpool to the event today.  He was a little late, so now he’s not allowed to say that Florence from Florence and the Machine is a hot goddess.  When we get there, there are a few other people, but not really enough to worry about it being busy.  It’s a Q & A, so there’s no telling when she might get here.  During the waiting period, C.B. asks me about every 10 minutes what time it is.  After being nice and telling him the first 6 times, I realize there’s a frickin clock in plain view.  “Why don’t you just look up?”

We wait and wait for her to arrive, but nothing is happening.  Oh wait, we did see a limo, and we got around it.  Only to have some guy on a date get into it.  Oops!  AGAIN I am being bombarded with Batman conversation.  UGH!  It’s now past the time she should be there.  Somehow they must have snuck her in.  There are about 5-6 ways of getting in and out of this place.  We decide to try a different spot.  After waiting maybe 10-15 minutes, all of a sudden, she’s right in front of us. 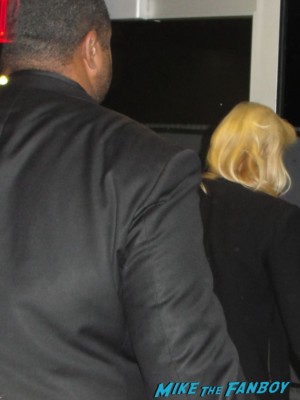 There’s only 6 of us there, but her publicist and the guard were being very strict.  “one each!”.  That’s fine, I had 2, but at least she’s doing it.  What did bum me out, was only 2 of us asked for pictures, but they said she was in a hurry.  I mean, she very well might be, but really, only 2 of us asked.  Oh well, again, she did sign, so I can’t be too upset.  I went for 1 person and got it.  Could have been a lot worse!

Well, it’s happy hour somewhere, time to get my drink on. 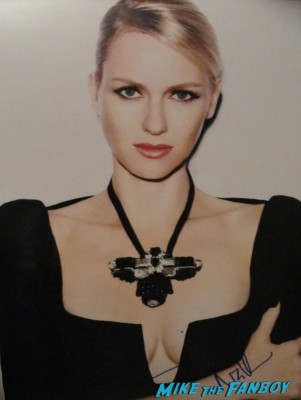