It seems like the hot button topic of the moment is race relations. Everywhere you turn, race just seems to be at the forefront and everyone has an opinion. It’s certainly not an easy issue to address in any medium, but at least getting the conversation going is healthy. Conversation, communication and understanding are some of the key things that can institute change. 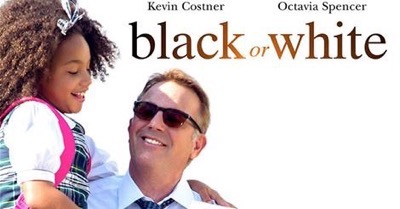 There’s no greater medium than film and television to get that conversation going and Black or White, the new family drama starring Kevin Costner aims to do just that. Elliot Anderson (Kevin Costner) is an attorney struggling with the death of his wife. Elliot and his wife are taking care of their granddaughter Eloise (Jillian Estell) an adorable bi-racial girl. 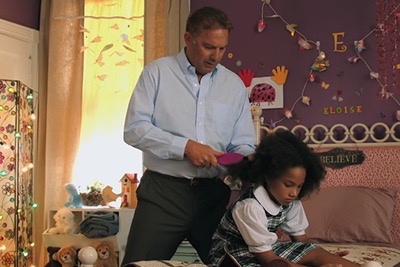 The death of his wife, Elliot now has to deal with more family drama in the form of Eloise’s other grandmother Rowena Jeffers (Octavia Spencer). Rowena is extremely emotional but well intentioned and wants her granddaughter not to lose site of her African American heritage. She also has a blind eye where her son is concerned and doesn’t accept the fact that he’s somewhat responsible for the rift between Elliot’s daughter and her family. 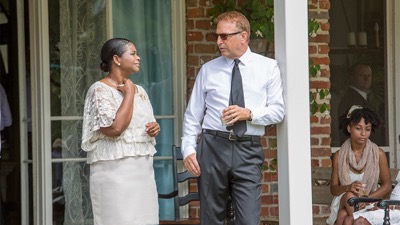 At first Rowena seems like she’s fine with working out a custody arrangement of some sort with Elliot, but then decides to sue him for full custody of Eloise negating the fact that Elliot and his family have raised Eloise since day one and have a great relationship with her. 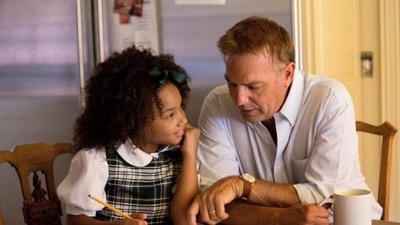 Elliot has also taken to the bottle way more than he should. There are times he can’t drive, forgets what day it is and has a hard time functioning. Elliot then hired Eloise’s tutor, Duvan (Mpho Koaho) to drive him around help around the house. He becomes a friend to the family and the family interplay is really heartwarming.

In the meantime Rowena’s brother Jeremiah (Anthony Mackie) is a high powered attorney and she “hires” him to go after custody or Eloise. Jeremiah wants to use the trial as a racial stomping ground and while Rowena offers a lip service protest, she eventually agrees. 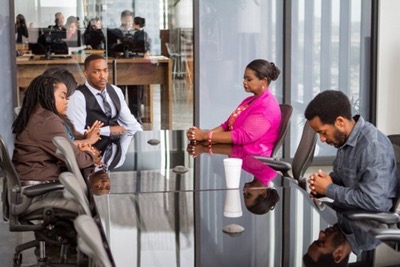 Black or White has been a passion project of Kevin Costner’s and you can see why. The subject matter is timely and at the forefront of what’s going on today. He does a really good job in the role of Elliot and allows himself to be vulnerable in a way that he’s never been onscreen before. It’s really great to see. Sadly, the script doesn’t live up to his performance. It’s overstuffed and awkward at times. The scene where Elliot tells Eloise that her grandmother has passed away was clunky and jarring. 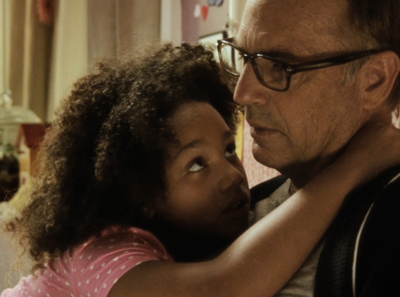 The film also does no favors to Octavia Spencer who gets to play the same character she’s been portraying in every project since The Help. I didn’t really understand her character’s motivation necessarily, why now? Why did she push for custody only since Elliot’s wife died and not before? If she was so concerned about how she was being raised wouldn’t this have come up earlier?

Even with it’s flaws, Black or White is still a enjoyable film. Watching it however, you just want it to be a great film. 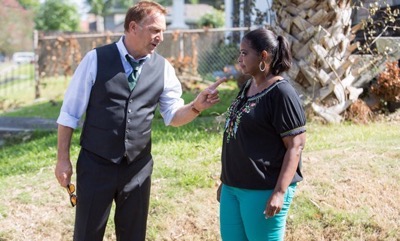 Black or White arrives on blu-ray in a fine blu-ray transfer. The details are sharp and crisp with a natural look. The close up’s are not muted and what’s really nice is the fine details in each scene really pop. The law office and trial scenes are contrasted nicely with the home’s of both Elliot and Rowena.

Sadly, there are few special features on this release. There are two featurettes, one with Kevin Costner and one titled Family First. The original theatrical trailer is included as well as one longer featurette titled Shades of Gray: The Making of Black or White. It has some behind the scenes footage and interviews. 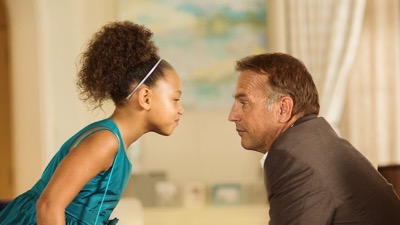 Overall, I admire films that raise questions even if they don’t pretend to have all the answers. While Black or White may be clunky at times, it’s still worth checking out, if for the performance of Kevin Coster alone. He does a fantastic job in the title role.

Black or White is out now on blu-ray!