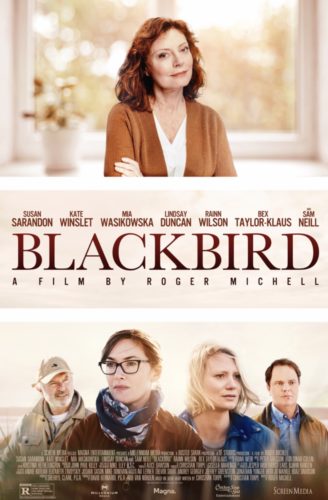 Checking out on your own terms is a compelling conversation, watching “Blackbird” on the other hand is a disastrous discussion. Academy Award winners Susan Sarandon and Kate Winslet can’t resuscitate this regrettable remake of the Danish drama “Silent Heart.”

Matriarch Lily (Susan Sarandon) along with her husband Paul (Sam Neill), arrange one final family weekend get-together at their beach house. After a long battle with ALS, Lily has decided to end things on her own terms and has summoned her loved ones for a long, loving weekend. However, there’s undeniable tension between daughters Jennifer (Kate Winslet) and Anna (Mia Wasikowska) threatening to spoil everything. Joining the family’s farewell is Lily’s lifelong friend Liz (Lindsay Duncan), grandson Jonathan (Anson Boon), Jennifer’s husband Michael and Anna’s partner Chris (Bex Taylor-Klaus) for a final reflection of love and a celebration of life. 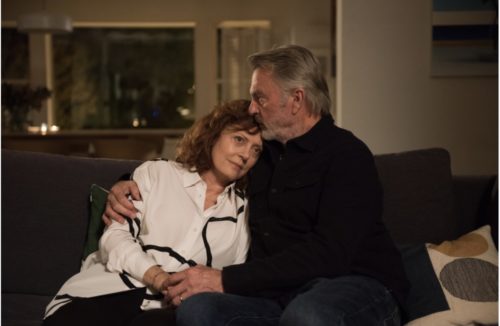 Dysfunctional family dynamics are always interesting to address. However, assembling a believable formidable fictional family, no matter how formulaic, can’t come together no matter how compelling the cast can be. Such is the case with “Blackbird.” Despite the acting pedigree of Susan Sarandon, Kate Winslet, Mia Wasikowska, Sam Neill, and Lindsay Duncan along with strong supporting performances, particularly by Rainn Wilson and Bex Taylor-Klaus, “Blackbird’s” beleaguered script and story shatter your expectations with a glorified superficial showcase. There’s no believability at all and feels like a toned down version of “August: Osage County” with only acting showcases and no substance at all.

Filmmaker Roger Michell made one of the greatest romance films of all time with “Notting Hill,” but has since been hit (“Venus” and “Le Week-end”) and miss (“Morning Glory” and “Hyde Park on Hudson”) with finding the beautiful balance for his big name cast projects. Unfortunately, it’s the latter as “Blackbird” is a jumbled mess. Sadly, it falls along the lines of films like “The Big Wedding” and “This Is Where I Leave You” with enjoyable casts on paper, but grossly miscast to create forgettable films with merely acting showcases and minimal chemistry. 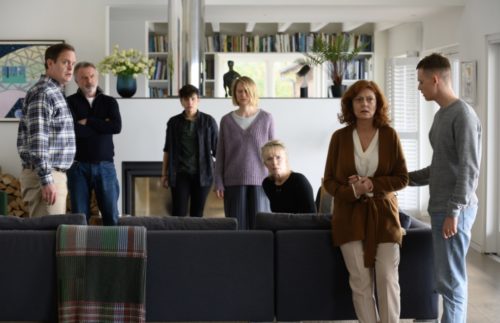 Originally Diane Keaton was cast as the matriarch Lily, which makes perfect sense considering it’s in the wheelhouse of her role in “The Family Stone,” but Sarandon’s Lilly definitely echoes “Stepmom” and resonates as a strong showcase for one of her best roles in years. However, the dysfunctional dynamics disrupt everything else with the movie as it’s hard to actually appreciate and empathize with any of the characters. Rainn Wilson definitely does the most with his opportunities proving in the right role he will exceed expectations and Sam Neill reminds viewers of how underutilized he has been, but beyond those three everything feels worse than a doctor’s diagnosis. Kate Winslet’s wearisome portrayal made no impact at all and Mia Wasikowska, another underutilized actress, portrays a role she should’ve outgrown by now as a “troubled and rebellious youth.” 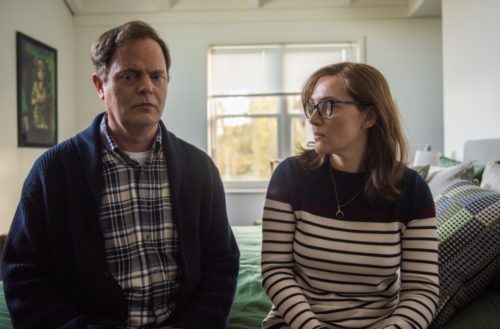 The tacky togetherness of this group pulls you away and makes the viewer realize they’re watching a dreary death drama. If you’re able to look beyond the monologues, the coasting cast and the mini moments throughout, the characters cobbled together are tolerable at times yet riddled with cliches. Unless you’re a fan of one of the performers, it might be best to get some bedrest than watch this movie meandering through mediocrity. Searching for meaning might have been the goal, but this staggering, slow snoozefest exists as nothing more than an empty ensemble.

Fathom Events and Screen Media are partnering to present “Blackbird” in approximately 500 select movie theaters across the U.S, with an exclusive nationwide cinema premiere on September 14th & September 15th.

In Additional Select Theaters and On Demand September 18, 2020