Bob’s Burgers, the animated series on FOX premiered in 2011 and was named as one of the best TV cartoons of all time by TV Guide in 2013. Recently at Wondercon I was able to sit down with creator Loren Bouchard and cast members Kristen Schaal, Dan Mintz, Larry Murphy, and John Roberts for a fun and lively interview.

Mapping out the seasons…

Animated series are very different than live action, they can last much longer and you can do more, but the prep time can be intense. “We have to…” Loren Bouchard said in regards to mapping out next season, “It’s basically a nine month gestation period but it’s more like a year, so we’re deep into in. We’re living in the future!”

What can we look forward to next year?

“It’s wonderful next year and I’m really enjoying myself!” Kristen Schaal exclaimed, “Im having a good time watching the shows for next year, such good things.”

“The season premiere is a musical” says Loren, “sort of a real musical. Gene gets into a musical battle with another kid, and in the corse of events you see Diehard the musical and Working Girl the musical, so we’re really happy with that!” 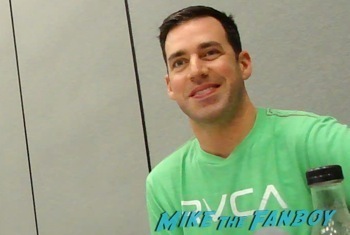 “Yes! Working on the music for the show is a great pleasure, and it’s been so nice that people have responded to it, people talk about it online and seems to be something people are interested in.” Loren said, “It seems reasonably considerate and nice to put it out there, we’re not trying to make money on it.

“20th Century Fox was glad the music caught on” Loren said, to which Kristen said, “There’s a space on Loren’s shelf that has been empty, and I said why don’t you put something there, and he said that’s where the grammy goes!” Adding with a laugh, “It’s going to be the Happy Feet of next year.” 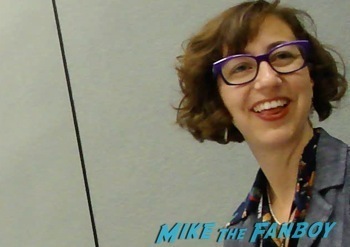 Speaking about that Fandom….

As we know, fans are creative and with a show as popular as Bob’s Burgers, fans have created some awesome collectables!

“Great art, great pictures, great drawings. In one of them Louise looks like me hungover.” Kristen Said. “I have two Louise hats that fans made for me.”

“The first season no one dressed like Linda, I’m always surprised when I see something.” John said.

“Oh Bob’s Burgers is coming out with a comic book!” Loren said, “It’s coming out this spring or summer.”

“You mean like now?” said Kristen, “Not the future now.”

“Yes, Dynamite is putting it out. They’ve been really disappointed with me/us in our slowness. In the future it’s already out. We’re contracted for five issues, I’m assuming that’s not the goal, but they want to see how those will do and we’ll do more. It’s hard to do the show and the comic book, but it’s fun. We’re not doing a stretched narrative more like bips and bobs, so you don’t necessarily have a lot of story arc we have to worry about on the show. Like ‘oh God that guy moved away in the comic and now we’re doing the show’ it’s like each character has a section of the comic book.”

“I just was worried you were burning really good ideas for the episodes on the comic books.” Kristen said with a big laugh. 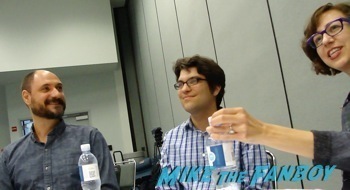 “I got a hug!” John said, “Last year we got into the big room cause the first two years we were in the smaller room, and then we were in the big big room. It felt like we graduated. Just seeing all the people dressed up and into the show, lining up. That’s always my favorite thing, you record and don’t really see the fans, and you hear about the buzz and people enjoying the show, I genuinely think all the episodes are great and not because I’m on it. It’s nice to see people enthusiastic your doing in showbiz.”

“You get to see a lot of people you otherwise wouldn’t (At Comic Con)” Larry added.

“We love comic con, it’s like Christmas, great parties” said John, “It feels like camp. I never get to buy anything thought. I always want to get to the floor and get like a big Darth Vader or a Godzilla, but I never get that.” 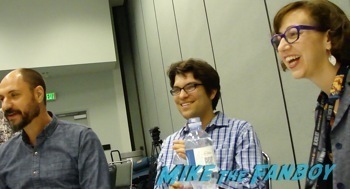 Who is coming up and who would your dream guest star be?

“Zack Galifianakis (Who is coming up) is really funny, the character for him is a great fit,” said Loren, “And we’ve been using Key and Peele a lot.”

“And they give good hugs!” Exclaimed Kristen.

“We left a message for Billy Murray the other day but he hasn’t gotten back to us yet.” said Loren.

I can’t imagine anyone, even Bill Murray not being charmed by this incredible cast.