I can’t believe we’re in the middle of November! There will be fewer new book releases and I’ve just returned from YALLFest which is my last event of the year. I’ll tell you guys all about it and some of the fantastic new books on the way. But first! Here’s my quick take on a few new books out this month. 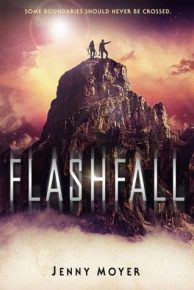 Pitch: An action-packed science fiction thriller set in a harsh world with tons of romantic tension

Story: “Orion is a Subpar, expected to mine the tunnels of Outpost Five, near the deadly flash curtain. For generations, her people have chased cirium—the only element that can shield humanity from the curtain’s radioactive particles. She and her caving partner, Dram work the most treacherous tunnel, fighting past flash bats and tunnel gulls, in hopes of mining enough cirium to earn their way into the protected city.

But when newcomers arrive at Outpost Five, Orion uncovers disturbing revelations that make her question everything she thought she knew about life on both sides of the cirium shield. As conditions at the outpost grow increasingly dangerous, it’s up to Orion to forge a way past the flashfall, beyond all boundaries, beyond the world as she knows it.”

Quick take: There’s lots to enjoy in this adventure in the same style as Hunger Games. Lots of big action and bad guys, conspiracy, mystery and more. There are quite a few technical descriptions which slow things down a bit, but overall it’s a great start to an epic series. 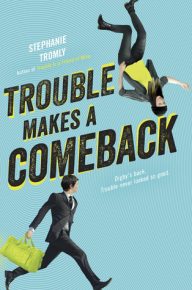 Pitch: The second book in a snarky mystery series featuring a couple of sharp-witted high school students with a talent for big trouble

Story: “A whip-smart, screwball noir mystery—with snappy prose, wry humor, and breakneck dialogue—this sequel to Trouble Is a Friend of Mine is perfect for fans of Veronica Mars, Sherlock, John Hughes, and Carl Hiassen.

After a fall semester of fiascos: getting arrested, then kidnapped, then blown up in an explosion (all thanks to the weird but brilliant Philip Digby), Zoe Webster is looking forward to a quiet spring. Now that Digby has left town, she’s finally built a regular high school life for herself. She’s dating Miles, the alternate QB; she knows girls she considers friends; she’s learning to enjoy being normal and semi-popular. Which of course is when Digby comes back: He’s got a new lead on his missing sister and he needs Zoe’s help.

Suddenly Zoe is tussling with a billionaire arch-villain, locking horns with armed goons, and digging into what makes the Digby family tick, even as she tries to navigate the confusing and emotionally fraught world of high school politics and locker-room drama. After all, it’s hard to explain Digby to a boy like Miles, especially when Zoe isn’t sure how she feels about Digby herself—or how he feels about her.

Now that Digby’s back, get ready for another hilarious whodunit filled with razor-sharp dialogue, ridiculously funny action, and the most charismatic, dynamic duo you’ve ever met. And just try to stay out of trouble.”

Quick take: While each book in the series has a self-contained mystery, you should read the first (Trouble is a Friend of Mine) to understand the relationships since the whole gang is back. This book is more about Zoe’s attempt to balance her boyfriend, friends and family than Digby and his big, complicated capers though there’s plenty of dangerous madcap moments. If you’re looking for a light sort of mystery, Trouble Makes a Comeback is snarky with lots of funny and (interestingly) flawed characters.

We Are Still Tornadoes by Michael Kun and Susan Mullen 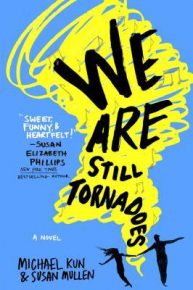 Story: “Growing up across the street from each other, Scott and Cath have been best friends their entire lives. Cath would help Scott with his English homework, he would make her mix tapes (it’s the 80’s after all), and any fight they had would be forgotten over TV and cookies. But now they’ve graduated high school and Cath is off to college while Scott is at home pursuing his musical dreams.

During their first year apart, Scott and Cath’s letters help them understand heartache, annoying roommates, family drama and the pressure to figure out what to do with the rest of their lives. And through it all, they realize that the only person they want to turn to is each other. But does that mean they should be more than friends? The only thing that’s clear is that change is an inescapable part of growing up. And the friends who help us navigate it share an unshakable bond”

Quick take: It’s a breezy book with witty banter that can be a bit too cute at times. While its a fun story, the plot gets a bit darker which adds some nice depth. The ending is a bit sudden so I wish there were more seeds planted before we got there.

Of Fire and Stars by Audrey Coulthurst 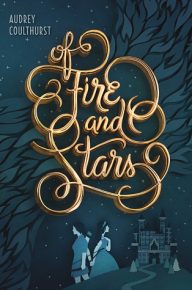 Pitch: Princess with secret ability to control fire falls in love with her betrothed’s sister

Story: “Betrothed since childhood to the prince of Mynaria, Princess Dennaleia has always known what her future holds. Her marriage will seal the alliance between Mynaria and her homeland, protecting her people from other hostile lands. But Denna has a secret. She possesses an Affinity for fire—a dangerous gift for the future queen of a kingdom where magic is forbidden.

Now, Denna must learn the ways of her new home while trying to hide her growing magic. To make matters worse, she must learn to ride Mynaria’s formidable warhorses before her coronation—and her teacher is the person who intimidates her most, the prickly and unconventional Princess Amaranthine (called Mare), sister of her betrothed.

When a shocking assassination leaves the kingdom reeling, Mare and Denna reluctantly join forces to search for the culprit. As the two work together, each discovers there’s more to the other than she thought. Mare is surprised by Denna’s intelligence and bravery, while Denna is drawn to Mare’s independent streak. Soon their friendship is threatening to blossom into something more.

But with dangerous conflict brewing that makes the alliance more important than ever, acting on their feelings could be deadly. Forced to choose between their duty and their hearts, Mare and Denna must find a way to save their kingdoms—and each other.”

Quick take: There’s a lot going on in this book, but it’s really a romance. That part of the story is fine, but I was hoping for more exploration of some of the other facets (the magic, her move to a strange country, her relationship with Thandi, a political place at court, etc…).

Thanks to Macmillan (Flashfall, We Are Still Tornadoes), Penguin Teen (Trouble Makes a Comeback) and HarperCollins (Of Fire and Stars) for providing the books for review. Want more details on my impression of these and other books? Check out my ratings and full reviews at Goodreads.